Retirees, Watch Out for the State Tax Bite

States are all over the map when it comes to taxing retirement income. 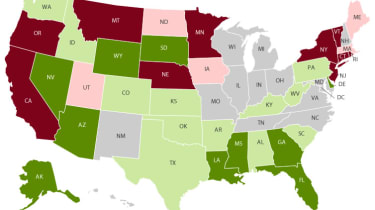 Tax planning is a cornerstone of retirement planning. But by focusing on Uncle Sam, many retirees overlook the state-tax bite. States vary across the map on how they tax everything from retirement income to retail purchases. If you're thinking of relocating, be sure to know how potential retirement destinations compare with your current state when it comes to taxes.

Here we look at three primary categories: state tax treatment of pensions and retirement income, Social Security, and estates and inheritances. Other categories to consider are sales taxes and property taxes. You can get more information on all of these taxes by going online to Kiplinger's updated Retiree Tax Map.

You can click on a state to see its full tax profile. You also can sort the map based on certain categories, such as those states that have no income tax. By using the "compare" feature, you can select up to five states to see how they stack up to each other side by side.

Retirement income of all kinds gets a pass in seven states. Alaska, Florida, Nevada, South Dakota, Texas, Washington and Wyoming have no state income tax.

Of the 41 states, plus the District of Columbia, that have an income tax, eight have a flat tax, which imposes a single rate on all residents regardless of income. North Carolina is the newest convert to the flat tax, which kicks in this year; the state's flat income tax rate is 5.8% for 2014 and drops to 5.75% for 2015 and beyond. The other 33 states, plus the District, impose graduated tax rates, which tax households with higher incomes at a higher rate.

Most states offer some type of retirement-income exclusion, though some are more generous than others. Mississippi, for instance, exempts all retirement income, including public and private pensions and distributions from retirement accounts, such as IRAs and 401(k)s.

Other states exclude a set amount of retirement income from taxation. These amounts vary greatly, from a few hundred bucks to thousands of dollars. Georgia offers the largest retirement-income exclusion, at $65,000 for a taxpayer 65 or older (couples can exclude $130,000). Georgians who are ages 62 to 64 can exclude up to $35,000 per taxpayer.

Pay close attention to the formula for the exclusion, which differs by state, too. Maine, which has increased its exclusion by $4,000, lets seniors exclude up to $10,000 of retirement income starting in 2014. The exclusion can be applied to pension income, annuity income and IRA distributions, but a taxpayer must first subtract Social Security benefits from the $10,000 deduction.

Of the remaining 13 states, Social Security benefits are taxable to some extent. Rhode Island and West Virginia, for instance, tax benefits the same as the federal government does.Connecticut, Kansas and Missouri tax benefits when a taxpayer's income exceeds certain thresholds that are higher than the federal threshold. As of 2015, Nebraska, which now taxes benefits the way Uncle Sam does, joins this group. Starting next year, Nebraskans whose adjusted gross income is $58,000 or less if married filing jointly, or $43,000 or less for all other filers, will avoid having to pay state income tax on Social Security.

Some of these states allow benefits to qualify for a tax break under its retirement-income exclusion. New Mexico, for example, lets a retiree protect otherwise taxable benefits under its $8,000 exclusion.

The majority of states do not impose estate tax or inheritance tax. But 17 states and the District of Columbia have one or the other, and two states—Maryland and New Jersey—impose both levies. An estate tax hits the estate before assets are distributed, while an inheritance tax is paid by the heirs. Tennessee, which calls its tax an inheritance tax, imposes a tax on estates of more than $2 million in 2014; the exemption rises to $5 million in 2015, and the tax is eliminated in 2016.

The gift tax remains standing in only one state: Connecticut. Its gift tax kicks in after a $2 million lifetime exclusion. After implementing a gift tax last summer, Minnesota repealed it this year and retroactively for last year.

President Trump issued an executive order to suspend the collection of Social Security payroll taxes. How much will it save you?
Shrink Your RMDs in 2021 and Beyond

QLACs are a special type of annuity that lets you cut RMDs from your IRAs next year and beyond, reduce the taxes you pay and guarantee more lifetime …
Tax-Free Weekend Dates, States and Savings for Back-to-School Shopping

Sales tax holidays are a great way to save money on clothes, shoes, backpacks, school supplies, and other back-to-school necessities.
Skip to ContentSkip to Footer