If you're hesitant about gold investing simply because prices have run up so much already, here are a few points to consider.

Gold prices recently hit new all-time highs, pushing through the previous highs set in 2011. The yellow metal has risen about 30% from its March lows and has been trending higher for the past two years.

It's not difficult to understand why investing in gold has been so popular lately.

As the COVID-19 crisis deepened earlier this year, the Federal Reserve pushed monetary policy to dovish levels previously thought to be impossible. Between March and June, the Fed's balance sheet jumped by around $3 trillion. At the risk of oversimplifying, that means that the Fed just created $3 trillion in new money and dumped it into the financial system. To put that in perspective, that number represents 14% of the entire $21.5 trillion U.S. economy.

And of course, it's not just the Fed. Every other central bank in the world is doing roughly the same thing, even if the respective dollar amounts are different.

So, what happens now? Can the epic run in gold prices continue, or are gold investors about to hit a top?

Investing in Gold Picks Up Momentum

Many investors get intimidated when they see an investment hit new all-time highs. But that's exactly what you want to see in a healthy bull market.

"An object in motion tends to stay in motion," says Adam O'Dell, editor of Cycle 9 Alert, quoting Sir Isaac Newton. "While you can point to fundamental factors that support gold's rise, it's gold's price momentum itself that has my attention. Momentum buying tends to beget more momentum buying, and today I'm seeing the conditions in place for a significant move higher."

Most gold is held in central bank vaults or held as jewelry, so the investable market for gold isn't exceptionally large. For example, the SPDR Gold Shares (GLD) – the largest and most liquid gold ETF – has just $67 billion in assets under management. The iShares Gold Trust (IAU) has just $26 billion. For perspective, the three largest S&P 500 index ETFs have a trillion dollars in combined assets, and the market cap of the S&P 500 index itself is $27 trillion.

So those worried about investing in gold at new highs, take a little heart. Given the relatively small size of the investable gold market, it wouldn't take much in the way of new inflows to send the price of gold sharply higher from here.

We saw the major increase in the Fed's balance sheet, but perhaps a better way to visualize the impact of the Fed's actions is by looking at the money supply.

M2 is a relatively broad measure of the number in dollars floating around out there, consisting of cash in circulation, checking accounts, savings accounts, money market funds.

This is real cash in wallets and in bank accounts, and the numbers we see here match the increase in the Fed's balance sheet. The money supply has expanded by about $3 trillion dollars since the COVID-19 panic really got underway in March.

An increase in the money supply does not automatically mean a surge in inflation … at least not immediately. As Dr. Lacy Hunt, Chief Economist for Hoisington Investment Management Company, explained it in a MacroVoices podcast, "The presumption is that if the Fed is able to increase the money supply that it will have important influences on economic activity and on the inflation rate. But GDP is determined by money and velocity."

Dr. Hunt expects deflation in the immediate future due to the massive destruction of demand during the virus lockdowns. But eventually, he expects that deflation will give way to major inflation and possibly hyperinflation as government debts effectively become unpayable and the Federal Reserve is forced to effectively finance the government by printing money.

Weakening of the Dollar Standard

It's a mistake to let politics guide your investment decisions. But at the same time, you can't be blind to political developments.

Today, the dollar-based world financial system is under attack. Rival powers like China resent the dollar's preeminence, and the multilateral system that has helped to prop up the dollar appears to be crumbling in the absence of U.S. leadership.

There's no real viable alternative to the dollar. No other world currency is large enough or structurally sound enough to do the job. But as the dollar's dominance potentially retreats, anti-currencies such as gold and even Bitcoin stand to fill that vacuum.

That might seem a little farfetched, but even the fear that it is possible could be enough to keep gold prices elevated for the foreseeable future.

All of this remains to be seen, of course. It could be that the inflation we fear may never materialize and that the dollar continues to reign supreme as the unrivaled global currency. But given the very real risk to financial stability posed by COVID-19 and the government response to it, doesn't investing in gold at least a little bit make sense?

Give Your Portfolio Some Shine 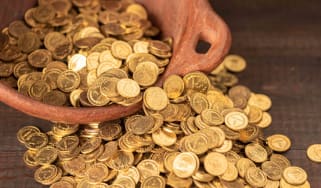 Give Your Portfolio Some Shine

With a weaker dollar and inflation stirring, it could be a good time to diversify with a little gold.
Stock Market Today 7/31/20: Big Tech Roars, Everyone Else Snores 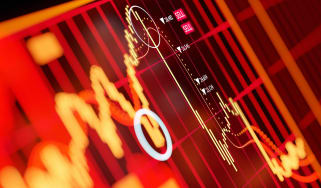 3M (MMM) and McDonald's (MCD) were among a number of high-profile stocks that helped the market lower on an earnings-stuffed Tuesday.
Stock Market Today 7/27/20: Technology Sizzles, But Gold Steals the Show 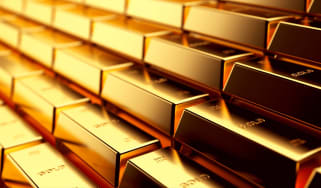 The Nasdaq had a big Monday on the back of mega-cap tech and chip stocks, but gold's new highs were the talk of Wall Street.