Our search for great stocks from around the world led us to Asia, home to the largest contract manufacturer of computer chips. 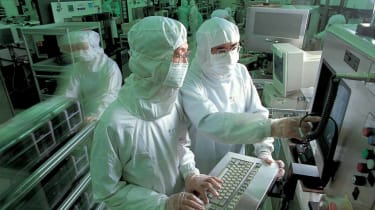 We went looking for the greatest companies outside the U.S. and came up with eight proven picks. Here's one of them: Taiwan Semiconductor (symbol TSM). To make the list, the businesses had to have U.S.-traded shares and be industry leaders. They also had to possess substantial financial resources to weather rough economic times. Finally, we sought companies that had significant catalysts to drive the next phase of their growth.

Read more about the case for investing in Taiwan Semiconductor below. Prices and related figures for U.S.-traded shares are as of August 23. Earnings estimates are for calendar 2016 and 2017, unless otherwise noted. Price-earnings ratios are based on estimated 2016 earnings, unless otherwise indicated. Also, take a look at seven more great stocks from around the world.

The business: Taiwan Semiconductor is the world's largest contract manufacturer of computer chips (meaning it makes chips designed and ordered by other companies). Total 2015 sales were $26.6 billion. Since its launch in 1987, the company has become a crucial supplier of chips to firms including Apple (AAPL), Broadcom (AVGO), Qualcomm (QCOM) and Nvidia (NVDA).

Track record: Revenue and operating earnings both doubled from 2010 to 2015, thanks in part to hefty demand from Apple for chips for its iPhones. Taiwan Semiconductor's shares have nearly tripled since early in 2010, from $10 to almost $30. The company's momentum has continued in 2016. Revenue is expected to surge 20% in the third quarter, to $8 billion, as the firm ramps up production of the central processor chip for the iPhone 7, which Apple is expected to unveil in September. Analysts on average expect the company to earn $1.88 per share in 2016, rising 7%, to $2.02 in 2017.

Reasons to own it: The chip business can be highly cyclical, which can mean wild short-term swings in the stocks. And there's always the risk of global recession, which could temporarily slash chip demand. With Taiwan Semi's shares near record highs, patient investors might want to wait for a pullback. But, says Credit Suisse, Taiwan Semiconductor's "long-term positives outweigh the short-term correction risk." The brokerage says the chip maker's competitive prowess should drive growth in three markets over the next few years: mobile phone upgrades, high-performance computing (artificial intelligence, for example) and the "Internet of Things" (the technology that facilitates networking of homes, factories, energy grids and much more). Rising free cash flow (cash profits after the capital expenditures needed to maintain a business) should also fuel rising dividends. The company boosted its payout by 30% in July.