There is an old Wall Street maxim that the safest dividend is the one that’s just been raised.

There is an old Wall Street maxim that the safest dividend is the one that’s just been raised. Which is why if you’re not familiar with Dividend Achievers, you should be.

You can always find that occasional company that continued raising its dividend right up until it cut it (Kinder Morgan in 2015). But generally speaking, it’s safe to say that a dividend stock aggressively raising its payout is a healthy company and one that is justifiably confident about its future.

Earnings per share can be aggressively manipulated, as can reported revenues. Even the cash flow statement can be suspect because it ultimately pulls most of its key data points from the income statement, which can be a work of creative fiction.

Paying a dividend requires actual cash on hand. And a dividend hike implies that management is confident that there will be a lot more cash coming down the pipeline to support a higher dividend in the quarters ahead.

But even when it comes to dividends, you have to look out for chicanery and focus on quality. That means paying the dividend out of real profits and cash flows, not debt or new share issuance. As forensic accountant John Del Vecchio, co-manager of the AdvisorShares Ranger Equity Bear ETF (HDGE), says, “Dividends are a distribution of profits; a way for a company to reward its patient shareholders. But a dividend paid from debt or equity proceeds isn’t a dividend at all, but rather a return of capital. Don’t be fooled by a company returning your own money to you while calling it a dividend.”

Today, we’re going to take a look at Dividend Achievers – companies with a history of raising their annual dividends for a minimum of 10 consecutive years – that aren’t just providing token upticks. The idea is that we’re limiting our pool to stable companies with a long history of safely delivering the goods, but that also are well-positioned for growth in the immediate future.

Data is as of Feb. 15, 2017. Dividend yields are calculated by annualizing the most recent quarterly payout and dividing by the share price. Stocks are listed alphabetically. Click on ticker-symbol links in each slide for current share prices and more.

There’s something about the Aflac (AFL, $88.42) mascot duck quacking “Aflac!” that gives this insurance giant something of a cartoonish vibe.

All the same, there’s nothing funny about Aflac’s dividend growth. The company yields 2.4%, which is competitive with its peers in the financial sector, and it just hiked its dividend by a cool 16%. This is completely independent of the 100% stock dividend (effectively a 2-for-1 stock split) that was announced on Feb. 13. Aflac has raised its dividend at least once per year for 35 years and counting, which means it’s not just a Dividend Achiever, but a Dividend Aristocrat. That’s an impressive streak, and one that likely won’t break anytime soon.

Insurance is a tough business to be in these days, but Aflac mitigates its risks by diversifying and by avoiding politically-contentious products. It has operations in both the United States and Japan, and its U.S. operations avoid most of the expensive traps of the Affordable Care Act era, focusing on supplemental policies rather than broad health plans and on loss-of-income products, such as short-term disability insurance.

With the U.S. health system very much in a state of flux, Aflac would seem like a much safer bet than the average health insurer.

If there is a common theme in this article, it would be “boring companies with exciting dividend hikes.” Church & Dwight (CHD, $49.71) fits this mold perfectly.

Church & Dwight makes a variety of household cleaning and personal care items. Some of its brands include Arm & Hammer baking soda, Arrid deodorant, OxiClean stain remover and Trojan condoms, among others. None of its products are particularly noteworthy or interesting. But they are staple brands that have been around for decades, and likely still will be thriving long after anyone reading this article is dead and in the ground.

As with most of the rest of the stocks on this list, you’re not likely to get rich quick in Church & Dwight. But you are likely to see your dividend rise every year at a pace well exceeding the rate of inflation. That’s a winner.

Up next is toymaker Hasbro (HAS, $97.36), the maker of toys and merchandise covering the Star Wars, Marvel and Transformers franchises, among many, many others. If you are a parent, it’s likely that Hasbro has taken a fair bit of your disposable income over the years.

You might as well get some of it back via Hasbro’s high and rising dividend.

The toy landscape has been shifting for years, with mobile gaming and other new entertainment options competing for the attention of kids. Hasbro has managed to change with the times and stay relevant, tying their toys to popular movies and TV shows. Others, such as rival Mattel (MAT) – which Hasbro made a merger bid for in 2017 – have been far less successful.

Hasbro made a windfall from the last Star Wars movie, of course, and has profited handsomely from the popularly of the Marvel Cinematic Universe, which includes the Avengers, Thor, and Iron Man franchises, among others. That’s likely to step up a notch in 2018 with the widely anticipated launches of Black Panther and the third installment of The Avengers.

Hasbro has done a good job of turning its business success into a long string of dividend hikes. The stock has raised its dividend for 15 consecutive years and currently yields 2.6%.

This premier toymaker recently announced a 12% dividend increase, which is a little higher than the company’s average annual bump. But unless children fall out of love with superheroes and Jedi, don’t expect that dividend growth to slow down any time soon.

Chances are good you’ve never heard of MSC Industrial Direct (MSM, $89.35), as it’s not the sort of company you’re likely to come across in your normal day-to-day business, though MSC has been in operation since 1941. The company markets and distributes metalworking tools and machinery. It’s a gritty, old-economy business. But it’s one that has generated very solid dividend growth over the years.

Last month, MSC hiked its dividend by 21%. And this was just one quarter after raising it by 7%. Over the past 10 years, the company has managed to raise its dividend by about 11% per year. At current prices the stock yields about 2.6%. That’s not too shabby.

The beauty of a company like MSC is that it’s unlikely to suffer from obsolescence any time soon. These aren’t cutting-edge graphics processors we’re talking about here. They’re boring, old-school metal-working tools that haven’t changed a whole lot over the years.

If you’re looking for a solid dividend grower that is mostly future proof, then MSC Industrial Direct is a solid option.

Next in the queue is semiconductor designer Texas Instruments (TXN, $104.57), better known as “TI” for short.

Chances are good that you use TI’s products without even realizing it. Their chips and controls tend to work behind the scenes in things such as your car’s safety system. Graphics processor makers like Nvidia (NVDA) and Advanced Micro Devices (AMD) tend to grab the headlines today, as they drive high-profile processes like cryptocurrency mining. But TI’s chips keep the world around you humming along.

Like many tech companies, TI doesn’t sport an exceptionally high dividend yield at 2.5%. But make no mistake, Texas Instruments is a dividend-raising monster. Late last year, the company raised its dividend by 24%. The dividend payout ratio, at 47%, is low enough to suggest that additional large dividend hikes are doable. TXN also is a reliable Dividend Achiever, having paid a distribution every year since 1962.

As a general rule, technology companies are much more prone to obsolescence than old-line industrial companies. But TI has proven its ability to shift with the times and stay relevant. It has evolved into a dividend-raising champion along the way.

At the end of 2017, Toro raised its dividend by 14%. This followed a nearly 17% dividend hike the year before. Over the past 10 years, the stock has raised its dividend at an annual clip of nearly 20%. The 1.3% current yield might not be exceptionally high, but whatever the stock lacks in yield it more than compensates with dividend growth.

In Toro, you’re getting an aggressive dividend grower backed by strong demographic trends. With the Millennials starting to nest, that high dividend growth should continue for a while.

“As Millennials move through their adult lives, they’ll hit all the familiar milestones, forming families, having children, and putting down roots,” says Rodney Johnson, co-founder of economic forecasting firm Dent Research. “The transition will add growth to our economy as they fundamentally change their spending, moving from lattes to lawn care. Nothing says ‘I’m a homeowner and I’m proud!’ quite like lawn equipment!”

There’s really nothing sexy about railroad operator Union Pacific (UNP, $133.89). As far as businesses go, it’s about as boring as they come. The company moves cargo from point A to point B. That’s about it.

But while it might not be particularly interesting, Union Pacific is a critical piece of America’s economic backbone. It hauls everything from foodstuffs to crude oil to import and export containers across the 32,122 miles of its vast rail network.

Union Pacific’s dividend yield, at 2.3%, is a little higher than the S&P 500’s average. But its dividend growth has been spectacular. The company just raised its dividend by 10%, which is line with its average of the past few years. Moreover, UNP has paid a dividend without interruption for 119 years.

This is not the kind of stock to dazzle you with triple-digit annual returns. But if you’re looking for a dividend-raising workhorse, Union Pacific is one you might consider for your portfolio. Over its lifetime, it has survived two world wars and the Great Depression … not to mention shag carpet, velvet Elvis and the pet rock fad. In fact, Union Pacific probably made money hauling shag carpet, velvet Elvis and pet rocks.

No one knows what the world will look like in another 119 years, but Union Pacific should still be around, moving the merchandise.

Here are 13 dividend stocks that each boast a rich history of uninterrupted payouts to shareholders that stretch back at least a century.
15 Cheap Dividend Stocks Under $15 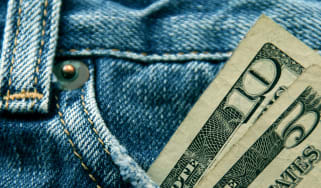 If you're looking for cheap dividend stocks and frustrated by the lack of options, check out the following list of 15 picks under $15.