With the Juppy, adults don't have to strain their back to walk with young kids. 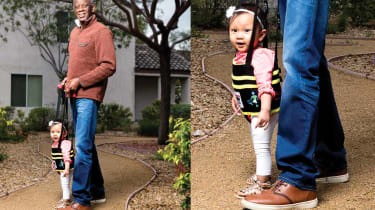 How did you get the idea? In 2008, I attended my grandchild's soccer practice, where I saw a woman bent over, walking her toddler. I thought, There must be an easier and safer way.

What did you do next? I drew a sketch of what I wanted, and I had a tailor make one. I was selling men's clothing in Las Vegas. When clients would come into the store with their babies, I would ask them to try out the prototype. I'd ask them what they liked or disliked. We made two more versions before we started selling it. I named it Juppy, which is my son Jeffrey's nickname.

Who manufactures it? I couldn't find a manufacturer here in the States. So I found one in China, which was more cost-effective anyway. Our first production run, in early 2009, was 1,000 units.

Did you patent the Juppy? I sold under a patent pending until I received my patent in 2015. It cost about $15,000, and it protects me for another 17 years.

How did you begin to sell it? I visited baby stores in San Diego and Los Angeles, but I didn't receive any orders. I realized they were struggling and I needed to focus my efforts on the internet. In Las Vegas, I snuck into a trade show for baby gear and made a deal for 700 of the 1,000 units with BabySteals.com, which is like Groupon. The Juppies sold out in three hours, and I made $12,000. I quit my job.

Where can you buy it? We sell it on our website and on Amazon.com, as well as the sites of Sears and Walmart. We sell the regular size, which holds up to 35 pounds, for $29.99 and a larger one for $39.99. Setting up to sell a product on the big online retailers' sites is a bit daunting, but you learn. Usually, we pay them 15% of the retail price.

Who fulfills the orders? If the big retailers fulfill orders, it can cost as much as 30% of revenues. So my fiancee, Mayra Sotello, and I fulfill about 85% of orders out of my garage. For the balance, we use a company that helps us sell in online markets overseas.

What's the Juppy's potential? About 4 million babies are born annually in the U.S. If I got 5% of that market at $29.99 per unit, I'm looking at $6 million a year. I feel like I'm three feet from gold.

How long will you keep going? I'd like to work to about age 70. I'd sell the Juppy before then if I got a good deal. Shark Tank called me in 2015 and wanted me to make a pitch, but I passed when I realized that any Shark would get 20% of my company but would want 80% of the say-so.