How a Border Tax Would Affect You

A plan to limit imports could raise prices but also create more jobs. 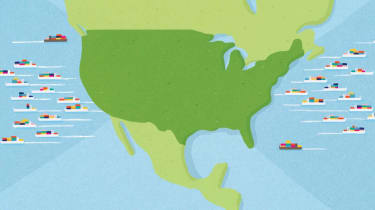 After grappling with your own tax return, you probably haven’t given a lot of thought to how much Apple and ExxonMobil pay Uncle Sam. But a Republican plan to reengineer the corporate tax code could have a direct impact on your bottom line. How much? That depends on whom you talk to and where they stand on the border adjustment tax.

The border adjustment tax would eliminate taxes on income from products sold outside the U.S. while removing tax deductions for the cost of imported goods, which would effectively impose a 20% surcharge on imports. Proponents say the change would encourage companies to make products in the U.S., thus generating more jobs. The tax on imports would raise an estimated $1 trillion over 10 years, enabling the government to cut corporate tax rates—currently, the highest in the world—from 35% to 20%. Chief executives of companies that are big exporters, such as Boeing, Caterpillar and Pfizer, are big fans of the BAT. They say the current business tax code gives an unfair advantage to foreign competitors and foreign-made goods.

But chief executives from Wal-Mart, Target, Macy’s and dozens of other retailers contend that the BAT would increase the cost of just about everything by up to 20%. For most consumers, switching to items made in the U.S. isn’t an option. About 97% of the clothes and 98% of the shoes sold in the U.S. are made overseas, according to the American Apparel and Footwear Association. “Whether it’s the automobile you drive, the gasoline you use, the groceries you put on the table, or the shoes and the clothes you put on your feet and back, the prices of all of those things will get driven up by the border adjustment tax,” says National Retail Federation chief executive Matthew Shay. The BAT has strong support from House Republican leaders but faces headwinds in the Senate, where some Republican lawmakers have expressed concern about how it will affect big retailers.

The plan’s supporters argue that a sharp increase in the value of the dollar would help offset any price hikes. Here’s how: The tax break for U.S. exporters would allow those companies to lower prices initially, which would increase demand for their products overseas. That, in turn, would boost demand for dollars, driving up the value of the greenback by 20% or more. A stronger dollar would increase purchasing power for U.S. companies and consumers who buy materials or products from overseas, thus offsetting the higher tax on imports.

Because a BAT has never been tried, it’s unknown how long it would take to reach that kind of equilibrium. Currency traders might buy dollars in anticipation of a policy change, hastening the greenback’s rise. But economists at the Institute on Taxation and Economic Policy, a nonpartisan research group, say the adjustment overall could take years, and in the meantime, at least some portion of the tax would be passed on to consumers.

If you’re planning a trip to Paris, a stronger dollar is great news, but it has its pitfalls, too, particularly where your portfolio is concerned. As the dollar rises, it depresses returns from investments denominated in foreign currencies. One way around that problem is to look for funds that hedge their currency exposure, such as FMI International (symbol FMIJX), a member of the Kiplinger 25, the list of our favorite funds.

You may want to consider gifting your home — or maybe a fractional interest in it — as well as using an irrevocable trust before it’s too late.
The Annuity With a Tax-Planning Twist

Filing taxes after a divorce can add yet another problem to an already long list of challenges. But here are some tips to make your return to single l…