The 7 Best Biotech Stocks for Investors Who Hate Risk

Most of the buy-and-hold crowd tends to steer clear of biotech stocks, and for good reason.

Most of the buy-and-hold crowd tends to steer clear of biotech stocks, and for good reason. Biotechnology companies can be uncomfortably risky. Far too many horror stories of failed drug trials or the expiration of a crucial patent leading to massive stock plunges have circulated for years now, souring would-be buyers on the entire industry.

However, conclusions based on a handful of biotech stocks may have erroneously prevented investors from plugging into a perfectly reasonable risk-reward relationship. Said differently: Not all biotech stocks turn into disasters. The industry as a group is up nearly 70% for the past five years, proving many of these companies can reward patient shareholders who choose wisely. It’s simply a matter of doing your homework and having a little common sense.

Here are seven biotech stocks that aren’t nearly as risky as their typical peer. Thus, they may have a place in more risk-averse portfolios than most investors might presume.

The biggest biopharmaceutical companies don’t always win all the spoils. A small outfit with a novel idea and a little know-how certainly is capable of coming up with a game-changing drug.

On the other hand, large companies are better able to fund the development of new drugs or acquire early-stage drug candidates that initial developers can’t afford to continue cultivating.

Enter Amgen (AMGN, $203.20): a $130 billion behemoth that can flex its fiscal muscles at will. Amgen boasts nearly $30 billion in cash and investments, as well as average annual net income of around $6 billion over the past four years, so it can pretty much do whatever it wants without second-guessing itself (in terms of affordability).

Amgen is the company behind post-chemo therapy Neulasta, cholesterol treatment Repatha and arthritis drug Enbrel, just to name a few. The diversity of its portfolio makes AMGN a relatively safe investment; no single drug drives more than one-fourth of its revenue, and only two drugs generate more than a tenth of its revenue. A pipeline that consists of nine Phase III trials and five more Phase II trials further sets the stage for revenue diversity.

Celgene (CELG, $87.38) is an oddity within the biotechnology arena, in that its sales-growth and earnings-growth streaks haven’t been disrupted by patent expirations or rival biotech stocks. For more than a decade, Celgene has posted top-line growth every quarter; profit growth has proven almost as reliable.

That consistency is a testament to the strength of its R&D arm, which has developed drugs such as Revlimid – the second-best selling drug in the world right now – for the treatment of myeloma and lymphoma, as well as multi-purpose cancer treatment Abraxane. All told, CELG has eight therapies on the market, and a pipeline consisting of more than a couple dozen clinical trials.

Revlimid’s success is a double-edged sword. On one hand, Celgene expects the drug to generate $9.7 billion in revenues this year. On the other hand, CELG risks too much dependence on the drug, which will lose European patent protection in 2022, then U.S. patent protection in 2027 – a relatively short period of time within the world of drug-development.

However, CEO Mark Alles firmly believes several different drugs in the pipeline, such as JCAR017, fedratinib and luspatercept, could start to bear major revenue as Revlimid’s revenue starts to fade. Analysts collectively believe in the pipeline and current portfolio, too. Roughly two-thirds of the pros covering CELG consider it buy-worthy, and Wall Street gives the stock a consensus price target of $112 – 28% better than the stock’s current price below $88.

Ligand Pharmaceuticals (LGND, $264.18) is anything but your typical biopharma company. Indeed, it’s technically not a drug developer at all. Ligand develops and acquires drug-discovery technologies, then sells rights to use its intellectual property.

The clincher for investors? Ligand asks for a small percentage of the revenue generated by the drugs created using its platforms.

These aren’t obscure treatments, either. One of the drugs Ligand had a hand in creating is myeloma treatment Kyprolis, developed and brought to the market by Amgen subsidiary Onyx Pharmaceuticals. Ligand collects royalties ranging from only 1.5% to 3% of the cancer drug’s sales (varying with different scenarios). That doesn’t sound like much, but consider that sales for the second quarter alone reached $263 million (up 25% year-over-year). That’s not bad for a drug that was only first approved for limited use back in 2012.

This business model isn’t just some side-gig experiment. Ligand Pharmaceuticals is building a machine from the ground up to do more of the same. The company describes its business model as one that “creates value for stockholders by providing a diversified portfolio of biotech and pharmaceutical product revenue streams that are supported by an efficient and low corporate cost structure.” It adds, “Our goal is to offer investors an opportunity to participate in the promise of the biotech industry in a profitable, diversified and lower-risk business than a typical biotech company.”

With four revenue-bearing products already in its portfolio and a bunch more in trials right now, there’s a long string of low-cost, low-risk revenue on the horizon. 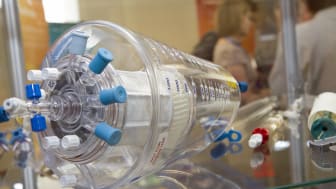 Medtronic (MDT, $96.46), which makes medical devices, technically doesn’t fit the textbook definition of biotechnology, though it’s sometimes lumped in with other biotech stocks – for decent reason.

There’s a side of Medtronic most investors don’t fully appreciate, or even know about. Its portfolio also consists of revolutionary biotechnologies such as electrosurgical pencils, cardio mappers, bone grafting, surgical imaging and cranial repair tools, just to name a few. That’s in addition to the more mundane stuff it makes, such as catheters and defibrillators.

This broad product lineup matters. Matthew Ure, President of Anthony Capital’s Texas region, explains, “Medtronics provides a great deal of stability within the biotech sector because of both size and holdings. With its acquisition several years ago of Covidien, it gained even more foothold in various markets using an almost countless number of products. From bandages to laproscopic surgical instruments, their reach is almost ubiquitous.”

That deep reach is about to matter a whole lot more, too. Ure continues, “With an increasing older population fueled by 10,000 Baby Boomers retiring daily for the next decade,” the company is well-positioned for prolonged success.

Although sales growth has been slow, it also has been consistent and outpaced by profit growth. Per-share operating earnings are in the middle of their sixth consecutive year of forward progress, and the pros are modeling 2019 as the seventh in a row.

Like Ligand Pharmaceuticals, PDL BioPharma (PDLI, $2.37) isn’t so much a biopharma developer as it is a drug portfolio builder. However, PDL is even less complicated in that its self-described mission is to “provide a significant return for its shareholders by acquiring and managing a portfolio of companies, products, royalty agreements and debt facilities in the biotech, pharmaceutical and medical device industries.”

When PDL made this business model its focal point in 2008 after spinning off its R&D arm into a company called Facet Biotech, investors cheered the idea. Nothing quite like it had ever been tried before, and plenty of drugs weren’t living up to their full potential. With a little more focused marketing attention, such a collection of less-than-mainstream pharmaceuticals could be turned into a viable business.

The idea worked, but it didn’t take long for drug developers and IP owners to realize they could do for themselves what PDL Biopharma was doing with other organizations’ research. Fruitful deals started to dry up just a couple of years ago, crimping revenue and earnings. But the dust finally seems to have settled, with supply and demand of marketable drugs and royalty rights finally reaching a balance. And once again, PDL Biopharma has a compelling future.

There’s still some risk to shareholders: namely, the trappings of owning a small-cap company and a low-priced stock.

Regeneron Pharmaceuticals (REGN, $383.70) isn’t the first name investors flock to when they start their search for biotech stocks, but maybe it should be. The company is not only profitable (and consistently so), but revenues and earnings have been growing steadily since 2012 when macular degeneration treatment Eylea was first approved. Since then, approvals in more and more countries has bolstered its organic growth.

On the surface, REGN might seem risky given that one drug accounted for the bulk of the company’s sales, and that said drug is now facing credible competition from Swiss healthcare giant Roche (RHHBY). But the company has a sizable pipeline, with numbers where it counts: six Phase III trials underway. Some of those trials are looking to expand approved uses of Eylea, for conditions such as diabetic eye disease. The fact Eylea already is approved for other illnesses makes it easier for regulators to green-light other applications.

Morningstar sector strategist Karen Andersen opines, “[Regeneron’s] partners have an ambitious strategy to bring several candidates into trials each year, which should provide Regeneron with more shots at further product revenue. Although Regeneron will undoubtedly encounter challenges in trials and on the market, we think its diverse pipeline, strong commercialization partners, and scientific leadership should comfort investors.”

We’ve eschewed alphabetical order for this final analysis, given that it’s so different from the others.

If you believe in biotech stocks but don’t want the risk of (or the burden of picking) one or two companies, the simplest solution is a great one: Buy them all. The iShares Nasdaq Biotechnology ETF (IBB, $117.66) does the job nicely.

Some of its top holdings should ring a bell. They include Amgen, Celgene and Regeneron – all names that earned a spot on this list of low-risk biotech stocks. The IBB also owns Biogen (BIIB), Gilead Sciences (GILD) and EpiPen maker Mylan (MYL), rounding out a proverbial dream team of biotechnology stocks.

An ETF mitigates some company-specific risk. A bet on IBB is a bet on the industry as a whole. So, what does the overall outlook look like for biotech?

The backdrop is admittedly alarming. Expensive drugs are a huge part of the reason healthcare has become debilitatingly expensive. Although early regulatory efforts to cull those costs have been problematic, health-care-related politics aren’t going away.

But for all that turbulence, the biotechnology industry’s per-share profit growth for the past three years has outpaced that of any other healthcare branch. Biotech’s bottom line has improved at an average pace of 18% annually, despite all these concerns. That shows you just how shielded the industry truly is.