Age and circumstance matter when it comes to building an ideal portfolio.

Age and circumstance matter when it comes to building an ideal portfolio. Whereas youngsters have both the time and the wages to make up for losses in the stock market, retirees need income and stability more than flash. Thus, an ideal stock portfolio for a retiree would be a diversified mix of strong companies that pay generous dividends. If the company sells products that are easily explained to the grandkids, that’s a plus.

Here’s a 10-stock portfolio designed to keep your golden years gilded. Stocks are listed in alphabetical order. Prices and related data are as of July 14.

Steve Jobs is gone, and Apple (AAPL), the computer maker he founded and later transformed, will never again deliver the breathtaking growth that helped turn it into the world’s most valuable company. And there’s no way Apple’s stock will ever repeat its stunning 21st-century performance, appreciating 90-fold since early 2003. The company, which is now better known for making phones and music than computers, is simply too huge. But Jobs’s successor, Tim Cook, has given every indication that, despite a far different management style, he is ready to take on challenges Apple faces in a rapidly changing technological environment. It helps that Apple’s treasury is filled with $151 billion in cash and investments, which the company has been using to buy back shares and pay a dividend. The dividend yield is modest, but Apple has already hiked the payout twice since it began sharing the wealth two years ago. Expect more of the same.

You may curse Chevron (CVX) when you fill your gasoline tank. But shareholders can take some solace in knowing that this energy giant has a long history of sharing the wealth. The company’s stock has been on a roll lately, hitting an all-time high of $134, before retreating slightly, but the shares still yield a generous 3.3%, and the company has hiked payments to shareholders every year for the past decade. Although earnings growth is nothing to write home about—profits are actually expected to fall this year—Chevron has more than enough cash to support its dividend and buy back shares. And if inflation rears its ugly head, you’ll like owning a commodity company. After all, alternative forms of energy may fuel a future America, but the bulk of the country’s businesses, cars and homes rely on oil and gas today. 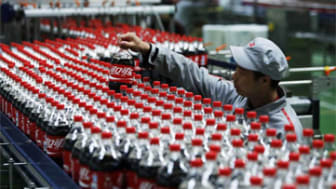 No matter where you are in the world, you’ll likely find a Coca-Cola (KO) product when you want to quench your thirst. The company makes Minute Maid, Powerade, Dasani, Sprite and, of course, Coca-Cola, and it sells those (and other) non-alcoholic beverages in some 200 countries. Coke is too large and well established to generate huge earnings gains, but it delivers consistent dividend payments that rise like champagne bubbles. Coke’s annual dividend rate of $1.22 per share has risen tenfold since 1991. Now that’s refreshing.

After snapping up electric equipment maker Cooper Industries in 2012, Eaton (ETN) morphed into an Irish company with a broad reach, managing and manufacturing power systems worldwide. Sales grew by a blistering 35% in 2013, and operating earnings soared to $2 billion—a 42% increase. Because of acquisition costs, net income rose just 4%. But with record free cash flow, Eaton boosted its dividend by 11%. CEO Alexander Cutler says he expects the global economy to continue to grow sluggishly, but he is optimistic about Eaton’s prospects for 2014 and beyond. Analysts share the company’s enthusiasm, anticipating that Eaton will be able to hike earnings by double-digit percentages for the next several years.

Casinos run by Indian tribes have been nipping away at the U.S. gambling business, but Las Vegas Sands (LVS) has an ace in the hole: Asia, where gambling is a growth industry. Las Vegas Sands is among just a handful of companies already operating in the booming Chinese gambling mecca of Macao, and it continues to develop properties in Macao’s “Cotai strip.” Its massive “Parisian Macao” development should be complete next year. Next conquest? Japan, a market promising $40 billion in annual revenue to the gaming companies that tread there. Worries that China’s government might restrict Macao gaming hit the stock earlier this year, but analysts say the concerns are overblown and the shares are a good bet.

Sales of the F-35 fighter jet helped propel Lockheed Martin (LMT) shares to near 52-week highs. But Citigroup analyst Jason Gursky says the aerospace giant’s stock is likely to be fueled by a less intuitive factor going forward: pension costs. Government contractors get to charge Uncle Sam for their workers’ pensions, but the Department of Defense has been a slow payer. Lockheed is among the top beneficiaries of tightened rules that force the Defense Department to pay up. Better yet, the U.S. government has been making it easier for contractors to sell weapons overseas, creating the opportunity for additional sales of F-35s. That’s a particularly lucrative business because the costly research and development is done. Gursky estimates that Lockheed’s free cash flow will increase by double-digit percentages each year over the next few years, providing the wherewithal for the company to raise its already generous dividend.

With populations in the developed world aging rapidly, it’s no mystery why investors are willing to pay premium prices for drug stocks. But Morningstar analyst Damien Conover thinks investors are overlooking Sanofi (SNY). The maker of prescription drugs and ubiquitous over-the-counter medications such as Rolaids and Allegra has treatments for diabetes and a vaccine for dengue fever in its pipeline of potential new products. Though earnings growth will be tepid in 2014, analysts expect solid gains next year. At 15 times estimated 2014 earnings, Sanofi’s American depositary receipts look cheap, and the stock’s $1.91 per share annual dividend is an elixir for investors sick of anemic yields.

A massive data breach announced during the last holiday shopping season left aisles at Target (TGT) bereft of shoppers, forcing the retailer to cut prices to move merchandise. Add a poorly executed expansion into Canada and the result was miserable earnings in the fiscal year that ended last February. The stock, which had been as high as $74 last summer, tanked, and the board sent Target’s CEO and its chief information officer packing. Yet analysts expect hefty earnings growth this year and next, and that spells opportunity for those investors who want to lock in a market-beating yield on a stock that’s unlikely to remain downtrodden for long.

Widely considered the best-managed of the big banks, Wells Fargo (WFC) weathered the financial crisis and the sluggish economy that followed better than most. Even during the depths of the financial crisis, when the industry was bleeding red ink, Wells Fargo remained profitable. Its capital position also stayed strong enough to continue paying dividends—a rare feat. RBC Capital Markets analyst Joseph Morford says one of Wells Fargo’s most attractive attributes is its seasoned team of leaders, who execute bank strategies more skillfully than their competitors. Morford thinks the company will grow by deepening existing customer relationships, allowing it to sell more products and services to the customers with whom it already does business.

Whether you’re washing dishes or clothes, heating up food or cooling it down, this maker of home appliances is likely to play a part. Whirlpool (WHR) products—including washers, dryers, refrigerators, freezers and dishwashers under a variety of brand names, such as KitchenAid, Jenn-Air, Maytag and Amana—are in kitchens and laundry rooms around the world. A costly restructuring and the loss of some tax credits depressed earnings during the first quarter of 2014. But excluding those costs, core earnings are strong, partly due to a revival in the U.S. housing market.