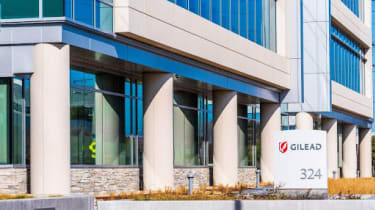 Gilead Sciences (GILD, $78.67) reprised its goal as one of Wall Street's most-watched health care stocks on Wednesday after announcing positive results from trials for its COVID-19 treatment remdesivir.

Gilead announced that its COVID-19 treatment remdesivir met its primary endpoint in a National Institute of Allergy and Infectious Diseases (NIAID) clinical study. It also provided encouraging data from an open-label Phase 3 trial.

The Phase 3 trial focused on severely ill patients and found similar results for those who took five- or 10-day dosing durations, with "more than half of patients in both treatment groups (being) discharged from the hospital by Day 14."

"The study demonstrates the potential for some patients to be treated with a 5-day regimen, which could significantly expand the number of patients who could be treated with our current supply of remdesivir," Gilead Chief Medical Officer Merdad Parsey said in a release. "This is particularly important in the setting of a pandemic, to help hospitals and healthcare workers treat more patients in urgent need of care."

Later Wednesday, the U.S. Food and Drug Administration said it was in "sustained and ongoing" discussions with the drugmaker over making its COVID-19 treatment available "as quickly as possible, as appropriate." The New York Times reported that a senior administration official said remdesivir could get FDA authorization for emergency use as soon as today.

GILD stock, which has climbed 21% through April 28, versus an 11% loss for the S&P 500, was up 9% in premarket action after a trading halt for the pending news. The company's stock has climbed in 2020 amid hopes that remdesivir – which Gilead introduced years ago as a general antiviral and was previously tested as an Ebola treatment – would prove effective against the COVID-19 coronavirus.

However, the drug is of interest to more than just GILD shareholders.

Because of its potential, the broader stock market has occasionally ebbed and flowed on any shreds of information about remdesivir's performance in clinical trials. Indeed, stock-market index futures surged higher ahead of Wednesday's open following Gilead's reports.

Remdesivir was touted early as a possible game-changer in the world's battle against COVID-19. "There's only one drug right now that we think may have real efficacy. And that's remdesivir," Bruce Aylward, an international leader of the World Health Organization's joint mission to China, said Feb. 24.

The market jumped April 16 amid a STAT News report claiming success against COVID-19 in a Chicago hospital. However, stocks broadly receded April 23 after the WHO accidentally published draft documents outlining a disappointing Chinese trial – documents that Gilead said included "inappropriate characterizations of the study."