Our search for great stocks from around the world led us to Switzerland, home to the world's largest food and drink maker. 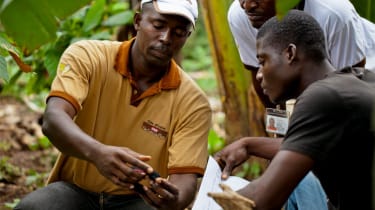 We went looking for the greatest companies outside the U.S. and came up with eight proven picks. Here's one of them: Nestlé (symbol NSRGY). To make the list, the businesses had to have U.S.-traded shares and be industry leaders. They also had to possess substantial financial resources to weather rough economic times. Finally, we sought companies that had significant catalysts to drive the next phase of their growth.

Read more about the case for investing in Nestlé below. Prices and related figures for U.S.-traded shares are as of August 23. Earnings estimates are for calendar 2016 and 2017, unless otherwise noted. Price-earnings ratios are based on estimated 2016 earnings, unless otherwise indicated. Also, take a look at seven more great stocks from around the world.

The business: Over the past 150 years, Nestlé has risen to become the world's largest food and drink company, with 2015 revenue of about $92.7 billion . Its best-known brands include Perrier, Gerber, Kit Kat, Purina, DiGiorno frozen pizzas, Lean Cuisine and Dreyer’s ice cream.

Track record: In a slow-growing world economy, Nestlé's own growth has suffered in recent years. Tougher competition has bitten into some of its brands. And what had been a source of strength — the company's huge sales in developing countries (43% of Nestlé's total) — has become a drag as many of those economies have weakened. In 2013, 2014, and 2015, Nestlé fell short of its annual revenue growth target rate of 5% to 6% (excluding the impact of acquisitions). Until recently, that had capped the stock's progress, leaving it stuck in a narrow trading range since mid-2014.

Reasons to own it: In late June, Nestlé's board of directors surprised investors by choosing an outsider as the company's next chief executive. Ulf Mark Schneider, 50, will take the helm on Jan. 1, 2017. He is currently CEO of Fresenius SE, one of Germany's biggest health care firms. Many analysts saw the move as a sign that Nestlé, in an attempt to address shifting consumer preferences, wants to stress nutrition, health and wellness in developing new food products. Investors have applauded: The stock has edged up to all-time highs. Research firm S&P Capital IQ believes Schneider is "the right candidate to unlock the vast potential value held within Nestlé’s portfolio." Success isn’t guaranteed, of course, and the stock isn't cheap. But Nestlé’s robust finances and decent dividend offer investors "a safe haven amid ongoing market volatility," S&P says.