Where Clinton and Trump Stand on Infrastructure

Both candidates have addressed America's crumbling infrastructure, but their plans differ in scope. 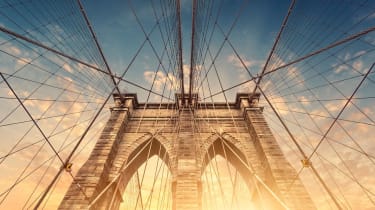 Key differences: Both candidates say they want to invest in America’s crumbling roads, bridges, tunnels and transit systems. Clinton has a $275 billion plan that includes expanding networks for free broadband access. Trump has only made suggestions regarding a “trillion-dollar rebuilding plan.”

Key Clinton quote: “I don’t have to tell you what a sorry state we’re in. Our roads and bridges are potholed and crumbling. Families endure blackouts because our electric grid fails in extreme weather. Beneath our cities, our pipeline infrastructure — our water, our sewer, you name it — is up to a century or more old. Our airports are a mess. Our ports need improvement. Our rail systems do as well.”

Clinton’s main focuses include maintaining and rebuilding roads, bridges, public transit and airports, as well as extending Wi-Fi access in public spaces across America. Her five-year, $275 billion plan earmarks $25 billion for a national infrastructure bank that would encourage further public and private investment. The ultimate goal: generating $500 billion in funding. To pay for her proposal, the Democratic candidate would clamp down on tax shelters for offshore corporate profits. According to a report by the American Society of Civil Engineers, America’s infrastructure deficit is $1.6 trillion, meaning that Clinton’s plan would fail to cover even half of the estimate of the funds necessary to fully repair the nation’s framework.

At the Democratic National Convention Clinton promised to improve the infrastructure to create jobs for domestic workers. To fund this, she said she would make sure “Wall Street, corporations and the super-rich” pay their “fair share of taxes.” This follows her tax plan which proposes significant tax increases on the top 1%.

Trump has alluded to a “trillion-dollar rebuilding plan” that, in dollar terms, comes closer to hitting the $1.6 trillion deficit mark reported by the ASCE. Citing a Senate Budget Committee estimate of job growth from infrastructure investment, Trump claims his plan would create 13 million jobs. Like Clinton, Trump wants to improve America’s roads, bridges, airports, rail systems and more. He believes his experience in the real estate industry would allow him to rebuild the country’s infrastructure “on time and under budget.” Trump hasn't explained how he would fund his proposals or one of his most widely cited campaign promises: building a wall between the U.S. and Mexico. Without factoring in the diplomatic challenges of erecting such a wall, Trump’s estimates of $4 to $12 billion in construction costs fall short of experts’ estimates of closer to $25 billion, plus $750 million a year for maintenance.

During his speech at the Republican National Convention Trump hinted at where the funding for his proposed rebuilding plan would come from. He promised to create “millions of more jobs” through rebuilding bridges, roads and tunnels. Funding would come from this de-regulation of businesses, which could free up as much as $2 trillion, he says.