The Nation's Crumbling Infrastructure: 6 Examples in Need of Upgrades Right Away

In his State of the Union address, President Obama once again stressed the need to spend more federal funds on crumbling infrastructure in coming years, but given the focus on budget cutting on Capitol Hill, Obama's clarion call will go largely unheard on Capitol Hill.

In his State of the Union address, President Obama once again stressed the need to spend more federal funds on crumbling infrastructure in coming years, but given the focus on budget cutting on Capitol Hill, Obama's clarion call will go largely unheard on Capitol Hill. How much does Obama have in mind? Around $100 billion or so. That may sound like a lot, but it’s still a drop in the bucket in terms of what's needed.

The consequences of falling short and sidestepping repairs and upgrades are grim: Lives and businesses will be at greater risk, jobs will be lost and the nation’s economy will suffer.

Properly repairing and replacing the nation's rickety bridges and highways (plus transit systems and related infrastructure) would require about $220 billion a year between now and 2040, according to the American Society of Civil Engineers (ASCE). But actual spending won't likely come close, so an average American family of four can expect to be dinged with more than $1,000 a year in auto repairs, time lost to sitting in traffic jams, etc.

Trucking lane bottlenecks will lead to higher shipping costs and job losses – nearly 900,000 of them by 2020, ASCE estimates, and te U.S. economy would suffer nearly $1 trillion in lost GDP growth as a result of the congestion.

Worst case examples: Perhaps the nation's most heavily trafficked, structurally deficient bridge is the I-10 span over Normandie Avenue in Los Angeles; it's crossed by 321,000 vehicles daily. The state with the most structurally unsound bridges: Pennsylvania, with 26.5%.

Growing delays at the nation's busiest air hubs figure to cost the U.S. economy more than $300 billion by 2020, along with 350,000 jobs, ASCE says. RIGHT? Meanwhile, shipping costs for air freight will climb 6% higher than they would with adequate airport capacity. Yet annual spending on airport construction and expansion is estimated by ASCE to be about $2 billion below needed levels.

Worst-case examples: Ranked dead last on Uncle Sam's list of major airports with the most delays: San Francisco International Airport. Another perennial contender for most delays is Newark Liberty International.

There are a whopping 170,000 separate networks of underground pipes, pumps and filtration systems distributing drinking water to 300 million Americans every day, and thousands of them are nearing the end of their useful lives. Some serving Eastern cities date to 1900 or even earlier. But the gap between available dollars and investment needs for all of the nation's water systems exceeds $54 billion, ASCE says. Unless spending picks up, the gap will top $80 billion by the end of the decade and rack up $206 billion in higher water bills and other costs for households and businesses.

Worst-case example: In Philadelphia, pipes average 78 years of age, with some dating back to 1824. The city is replacing 20 miles of drinking-water pipes and eight miles of wastewater pipes a year.

For now, the recession has lessened electricity demand from both businesses and consumers on the nation's electric grid — including 5,800 commercial power plants and 350,000 miles of high-voltage transmission lines. But starting around 2020, increased demand for power across the U.S. will require new plants, transmission lines, transformers and other gear. Trouble is, spending won't keep pace. By 2040, ASCE says the investment gap between needed infrastructure and actual spending will be an eye-popping $732 billion.

Worst-case example: Shortages already lie on the doorstep of Texas. The Lone Star State faces potential deficits in generating capacity relative to expected demand over the next couple of years.

American Association of Port Authorities President Kurt Nagle says many port authorities and their business partners are making improvements to rail terminals, cranes and other equipment "inside the port gates." But those upgrades won't matter much if ships can't get into port. Most ports' shipping channels require regular dredging to ensure they're deep enough to accommodate container ships and other large vessels. That responsibility lies largely with Uncle Sam, who's falling down on the job. ASCE estimates the cost of deferred port dredging will add up to $16 billion by 2020, leading to slowdowns and lost commerce.

Worst-case examples: The most congested port facilities in the U.S. are in Los Angeles and Long Beach, Calif. Goods routinely stack up there, waiting for trucks and trains to take them inland.

Big barges plying the Mississippi, Ohio and other waterways with cargoes of coal, timber, grain and other bulky freight are essential to the economy. But many river systems are gummed up, and the Army Corps of Engineers says it'll take $13 billion between now and 2020 to keep delays from getting worse. Actual planned spending is $7 billion.

Worst-case example: The Olmsted Locks and Dam at the confluence of the Mississippi, Ohio and Tennessee rivers is the busiest intersection on the entire U.S. inland waterway system, measured in tons of cargo. Though work is under way to replace locks built in the 1920s, the project isn't expected to be completed until 2020. A breakdown in the meantimecould be disastrous for U.S. shipping. 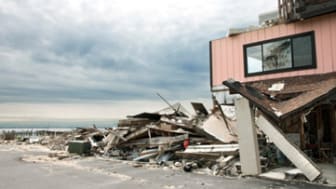 SLIDE SHOW: 10 States Most at Risk of Disaster