9 Amazing Military Technologies of the Future

Consider the unmanned aerial vehicles better known as drones. Barely a blip on military blueprints a decade ago, drones now make up half of the U.S. Air Force fleet. And with the next generation of drones will come an eye-popping array of weapons and equipment designed to support and protect troops on the battlefield and on secret missions.

Here are nine military technologies being developed through the Defense Advance Research Projects Agency (DARPA) and other parts of the military, working with defense contractors and other private companies. They all have the potential to change the face of war. 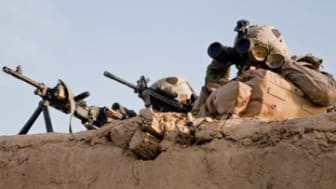 What Defense Cuts Will Mean to the U.S.

8 New Technologies That Will Rock Your World

Base Closings Around the Country