Skip to headerSkip to main contentSkip to footer
healthcare stocks

Telehealth stocks are cooling off after blazing higher for most of 2020. But digital health services aren't going anywhere - good news for these five picks.

There are no silver linings to the pandemic. Nevertheless, some stocks and sectors have benefited greatly from the societal changes COVID-19 has wrought. One such success story can be found in the nascent telehealth industry.

Companies that deliver virtual medical appointments, healthcare, healthcare diagnostics and the artificial intelligence and cloud-based services underpinning it all are having a fine 2020. Indeed, most telehealth stocks connecting patients to physicians, insurers, hospitals and health systems have been winners.

And demand is only going up.

According to management consultant McKinsey, 46% of U.S. consumers in April were using telehealth to replace canceled healthcare visits. And the market is only expected to get bigger – much bigger. "The telehealth market by revenue is expected to grow at a CAGR of over 28% during the period 2019-2025," according to ResearchAndMarkets forecasts.

One hurdle for investors to overcome is that when it comes to pure-play telehealth stocks, the pickings are somewhat slim. To that end, we've sorted through the comparatively small telehealth sector to find some of analysts' favorite pure plays.

S&P Global Market Intelligence surveys analysts' stock ratings and scores them on a five-point scale, where 1.0 equals Strong Buy and 5.0 means Strong Sell. Any score of 2.5 or lower means that analysts, on average, rate the stock a Buy. The closer the score gets to 1.0, the stronger the Buy call.

After taking into account analysts' scores, equity research and company fundamentals, we've homed in on five of the best telehealth stocks to play the industry's explosive growth. Just note that many of these stocks are starting to cool off after red-hot 2020 runs. In a few cases, analysts are suggesting you put these stocks on a wish list and wait until additional dips before buying.

American Well (AMWL, $26.76), which provides online consultations with its physicians around the clock and throughout the U.S., has seen its stock cool off in a big way since its mid-September initial public offering (IPO).

Fresh off a $100 million investment from Alphabet's (GOOGL) Google Cloud business last summer, AMWL more than doubled its $18 IPO price to hit a high of $38.74 in its first three weeks of trading.

The stock has since come down to earth, trading around $27 a share. But that's still a gain of 49% from its IPO.

Analysts (and Google) are fans of the company's size and scalability. American Well (also known as Amwell) has more than 50 health plan partners covering 80 million members. Moreover, it has more than 2,000 hospital and health system partners. Monthly visit volume increased by more than fourfold in the first six months of 2020, while revenue rose 77% to $122.3 million compared with the first half of last year.

However, like with many telehealth stocks, patience might be rewarded on AMWL. UBS advises clients to wait before getting in on the name, saying the current valuation is already pricing in outsized growth.

"While we see potential for AMWL to accelerate growth above our estimates, we think it's challenging to ascribe it as much credit as we think the market is currently factoring in, and therefore wait for a better entry point," notes UBS, which rates the stock at Neutral.

As for the rest of the Street, two analysts rate shares at Strong Buy, two say Buy and four call it a Hold – with several of those latter ratings demonstrating concern about valuation, too.

M3 (MTHRY, $36.24), an internet-based provider of medical-related services to physicians and other healthcare professionals, has one of the hottest expected growth rates you can find. Indeed, analysts forecast earnings to jump by 30% annually on average over the next three to five years.

No wonder the Street is mostly bullish on this telehealth stock, which trades over the counter in the U.S. Six analysts rate the stock at Strong Buy, three say Buy and four say Hold. One analyst has a Sell rating on shares.

Like many of its peers, shares in M3 have been rallying hard during the pandemic, gaining 72% for the year-to-date. But be forewarned that M3's trajectory has made some analysts cautious of the name on valuation concerns.

After all, earnings trade at 159 times next year's earnings. That is a lot, even after taking the outsized growth rate into consideration. M3, were it in the S&P 500, would roughly be in the top fifth of the index's most expensive stocks. Let MTHRY cool off.

Teladoc Health (TDOC, $172.44), one of Wall Street's best-known telehealth stocks, is one of the biggest beneficiaries of the pandemic-induced move to virtual healthcare.

And consumers appear to be sticking around. The company, which provides virtual healthcare services to a range of stakeholders – including consumers, employers, health plans, hospitals and insurance companies – saw revenue more than double and total care visits triple during the third quarter.

Another way in which TDOC ended the third quarter with a bang was by closing its $18.5 billion acquisition of competitor Livongo at the end of October. The combined company aims to become a one-stop shop for all virtual care needs.

Teladoc stock has more than doubled so far in 2020, making shares look pricey by some measures. Although analysts as a group remain bullish, some say the stock will probably have to rest before its next leg up.

"TDOC remains one of the more compelling growth stories within healthcare and multiple secular drivers should continue to push adoption/utilization of virtual healthsolutions in the coming years," says Baird Equity Research, which rates it at Neutral (Hold). "However, with valuation well above historical averages, we think the stock may consolidate recent gains."

Of the 27 analysts covering TDOC tracked by S&P Global Market Intelligence, 13 call it a Strong Buy, four say Buy and 10 have it at Hold. There are no Sell ratings on shares.

Cloud-based healthcare services are having their moment in the sun, as artificial intelligence, security and sharing healthcare data become more important in a world of COVID-19.

That has helped make Nuance Communications (NUAN, $33.45), an artificial intelligence firm, one of the more attractive telehealth stocks, analysts say.

"The company overall continues to be laser focused on building a global cloud healthcare and artificial intelligence-driven business as more hospital-wide deployments shift to the cloud," says Wedbush, which rates shares at Outperform (Buy). "We view NUAN as a core healthcare cloud play for the coming years given the next generation technology needs in healthcare (accelerated in this environment) in which Nuance plays into with its strategic initiatives."

Shares in Nuance are up nearly 90% for the year-to-date and analysts think they have more room to run. Although the stock looks pricey – trading at almost 40 times 2021 earnings on a long-term growth forecast of just 8.5% – they seem to believe it can get even pricier.

A supermajority of analysts give iRhythm Technologies (IRTC, $251.08) a big thumbs up. Of the 11 covering the telehealth stock tracked by S&P Global Market Intelligence, six rate it at Strong Buy and three say Buy. Just two analysts have it at Hold.

IRhythm's stock really blasted off in 2020, putting up gains of nearly 270% so far this year. The company's hot growth prospects are fueling this excitement, as are its chances of producing some black ink.

Analysts expect iRhythm to swing to profitability in 2022 on the strength of accelerating revenue growth. The top line is forecast to expand by nearly 80% to $472 million in two years from this year's revenue estimate of $263 million. And analysts expect earnings to increase at an average annual rate of 30% over the next three to five years.

"The Zio ecosystem – made up of iRhythm's unique patch-based technology, AI-driven algorithm and curated reports – is disrupting the roughly $2 billion U.S. ambulatory cardiac monitoring (ACM) market," William Blair's analysts say. "With new indications and products, and first-mover advantage, we believe its tests can grow 25% to 30% over the next three years and still make up less than 25% of market share." 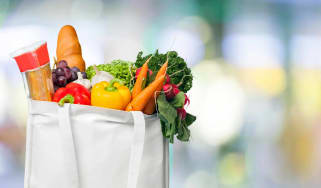 Consumer staples stocks face a possibly challenging environment in 2021. These 15 picks have an edge over their peers, however ... and analysts' stamp…
The 13 Best Healthcare Stocks to Buy for 2021

Most of the best healthcare stocks for 2021 will have some sort of ties to COVID, whether it's producing a vaccine or cure, or benefiting from the vir…
5 Best Communication Services Stocks to Buy for 2021 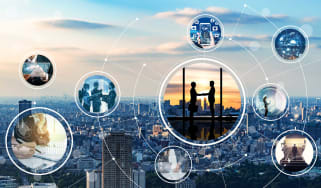 The best communication services stocks for the coming year have a high bar to clear if they hope to exceed their 2020 outperformance.
14 Best Biotech Stocks for a Blockbuster 2021 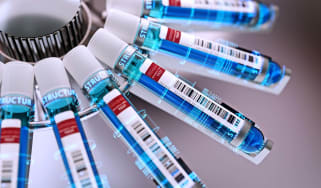 14 Best Biotech Stocks for a Blockbuster 2021

Whether you're conservative or aggressive, this list of 2021's best biotech and biopharmaceutical stocks has at least a few options to fit your invest…