The stock market put up some gains on Election Eve, but it was a broadly uneven affair that refused to give anxious election-watchers much of an idea what to expect tomorrow.

Several of 2020's bigger large-cap winners, such as Amazon.com (AMZN, -1.0%) and Facebook (FB, -0.7%), continued to shed more of their profits as part of a sharp weeklong downturn. That dragged on the Nasdaq Composite, which finished with a modest 0.4% return to 10,957.

The S&P 500, meanwhile, improved by 1.2% to 3,310, taunting investors by hovering right around an important level that has pretty accurately determined past presidential elections. 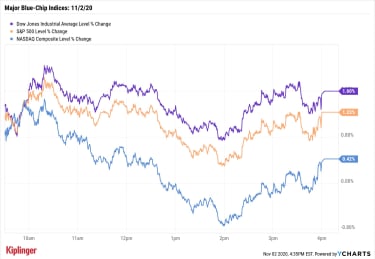 Is Pot Predicting the Presidency?

Are there any last-minute signs from investors or the economy?

"Indicators such as a weak U.S. dollar and rising incomes are suggestive of an incumbent party victory, and the average of GDP growth in the second and third quarters of election years can have predictive power for who wins the election – with stronger growth favoring incumbents," writes Ryan Detrick, chief market strategist for LPL Financial. However, "we would also point out that recessions close to elections have historically favored challengers, creating conflicting market signals going into Election Day."

In other words, not much there. However, one tiny (but, ahem, budding) industry might be trying to throw up a smoke signal. Marijuana stocks rocketed higher Monday, as evidenced by a 6.6% jump in the broader ETFMG Alternative Harvest ETF (MJ) of cannabis stocks.

America has been progressing toward legalization for years, and Joe Biden has pledged to decriminalize marijuana – so today's run-up was perhaps driven by investors front-running the electoral result.

OK, OK. Ultimately, any kind of indicator like that is just investors betting on what they think will happen, and it naturally won't help decide the presidential race. Still, investors with some risk appetite should nonetheless keep their eye on the space. That includes these 10 marijuana stocks and other investments, which could take off in 2021 if the environment for marijuana is kinder than it was in 2020.

Kyle Woodley was long AMZN and FB as of this writing.