Myths abound, but when it comes to your portfolio, it's not as simple as which party wins the White House.

Every four years, politics and finance converge as Americans elect a president and investors try to figure out what the outcome means for their portfolios.

A look back at history shows that presidential election cycles indeed correlate with stock market returns – although not in the same, clockwork way that, say, the moon pulls on tides.

As for the outcome of elections? The impact might surprise you.

Below, a few things investors should consider in election years.

Wars, bear markets and recessions tend to start in the first two years of a president's term, says The Stock Trader's Almanac; bull markets and prosperous times mark the latter half. But over the past century, the stock market has mostly run briskly across most of the presidential cycle before losing momentum during election years.

Since 1930, the Dow Jones Industrial Average has gained an average of 10.0% in a president's first year and 7.9% in the second, according to YCharts data. (Returns are based on price only and exclude dividends.) The year before an election year is historically the strongest, at 13.3% returns, then things slow down considerably, to 5.4% returns in election years.

There are exceptions, of course. In George Bush's final year of service (January 2008 through January 2009), for instance, the Dow sank nearly 32%.

But no one needs to tell you that the current cycle is anything but average. The Dow Jones Industrial Average put together 32.1% returns during the first 365 days President Donald Trump was in office, followed by a 5.2% decline in his second year, and an 18.8% rebound in his third. And between Jan. 19 and Oct. 19 of 2020, stocks have lost 2.5%, using the DJIA as a proxy.

Bespoke Research shows that since 1900, the Dow Jones Industrial Average has gained 4.8% annually. Conventional wisdom might suggest that Republicans, who are supposedly more business-friendly than the Democrats, would be more beneficial for your stock holdings. However, that's not quite the case.

"When we do see a political influence, it is not what might be expected," writes Brad McMillan, chief investment officer for Commonwealth Financial Network. "The average Republican administration over that time period saw gains of 3.5% per year, while the Democrats saw gains of almost twice as much, at 6.7% per year."

This trend is even more pronounced in recent decades. Since Bill Clinton's inauguration in 1993, U.S. equities have grown 14.5% on average while Democrats control the White House, according to YCharts data, against just 3% under Republican control. But clearly, American stocks have also done well under Trump.

Interestingly, international equities also outperform under Democrats, though emerging-markets stocks have the edge under GOP presidents. 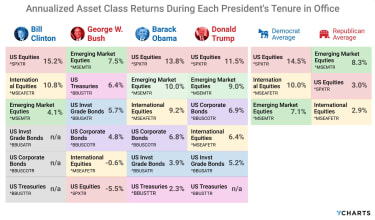 However, stocks do better in the lead-up to elections when America is signaling a Republican presidential win. 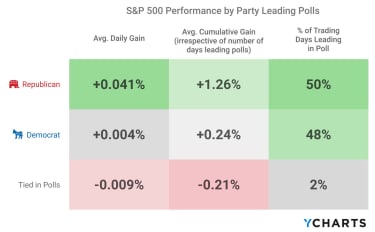 Jim Stack, a market historian and publisher of the newsletter InvesTech Research, also says to tune out headlines predicting doomsday for the markets.

"Today, many are warning of how a Biden presidency might negatively impact the stock market or the economy," he says, but adds there were similar warnings about Trump in the previous election cycle. "While investors should not ignore politics, it is worth noting that market results are rarely as dire as portrayed by the headlines."

Another urban legend is that markets do better when government is divided, says Russ Koesterich, chief investment strategist at BlackRock. The theory behind the legend, he says, is that "divided power saves both parties from their worst instincts. With neither party in control, government is somewhat neutered, leaving markets free to flourish."

But the theory isn't borne out by history.

YCharts has looked at stock returns going back to 1930 under three separate scenarios. When one party controls the White House and both houses of Congress, the Dow averages 10.7% annual returns. When there's a split Congress, stocks average 9.1% returns. But when the president is in the party opposite of both the House and Senate, stocks deliver a mere 7% average annual return.

But even then, those scenarios have played out differently depending on which party ruled which part of Washington. Consider this breakdown of scenario by party, using S&P 500 data from RBC Capital Markets data going back to 1933:

Important to remember is that all of this information is looking at the performance of the broader stock market. Presidential elections can and will continue to have more specific consequences for the market's various sectors and indices, depending on each party's agenda and how much of Washington they control.

Election results might not be so great at predicting stock market returns, but the converse is not the case.

The statistics are compelling. In the 23 president elections since 1928, 14 were preceded by gains in the three months prior. In 12 of those 14 instances, the incumbent (or the incumbent party) won the White House. In eight of nine elections preceded by three months of stock market losses, incumbents were sent packing. That's an 87% accuracy rate. (Exceptions to this correlation occurred in 1956, 1968 and 1980.)

The number to watch this year: 3,295. If the S&P 500 dips (and stays) below that number, it will be bad news for Trump, according to this presidential predictor indicator.

A stimulus package brought by a group of nonpartisan senators Tuesday sparked stocks, which kept most of their gains even after the plan was shot down…
Stock Market Today 11/30/20: Dow Closes Out Best Month Since 1987

Billionaires and high-asset hedge funds dumped a number of holdings during 2020's third quarter. We look at which stocks they've soured on, and why.
Stock Market Today 11/27/20: Nasdaq Notches Another High as COVID's Spread Worsens

An error in AstraZeneca's COVID-19 vaccine trial and persistent coronavirus troubles in the U.S. led investors to chase the old COVID trade Friday.