A day after nudging its way out of bear-market territory, the broader market took a half-step back.

On the single-company front, there were plenty of positive highlights, thanks to corporate earnings and other developments. Target (TGT, +12.7%) popped to all-time highs after it reported online revenues that nearly triple and a 10.9% year-over-year jump in same-store sales. Lowe's (LOW) reported a fantastic quarter in its own right: revenues climbed 30% and profits ballooned by roughly 69%, though the stock only gained 0.3%.

Apple (AAPL, +0.1%), meanwhile, became the first $2 trillion company (by market value) during intraday trading, though it finished with a value of $1.979 trillion. The company's stock is set to split 4-for-1 later this month.

However, stocks were shaken a bit in the afternoon after the Federal Open Market Committee released its minutes. FOMC officials "agreed that the ongoing public health crisis would weigh heavily on economic activity, employment, and inflation in the near term and was posing considerable risks to the economic outlook over the medium term."

"The discussions regarding the economic outlook highlighted the considerable uncertainty when judging the path of the recovery, which reflected the Committee's addition to the July post-meeting statement: 'The path of the economy will depend significantly on the course of the virus,'" writes Bob Miller, BlackRock's Head of Americas Fundamental Fixed Income. "To us, this strongly suggests that both monetary and fiscal policy support will continue to be required for the recovery to remain on track."

We pointed out yesterday that stocks sometimes take breathers after reaching bull-market territory. But some data points to the potential for better prices in both the long and short term, when the market has gone a while since reaching record territory.

"As shown in the LPL Chart of the Day, returns after a long time without new highs actually get better," writes Ryan Detrick, Chief Investment Strategist for LPL Financial. 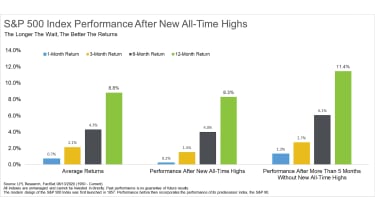 "One, three, six, and 12 months after the first new high in more than five months show stronger performance than average or after any new highs," he writes. "Yet another reason to think that this bull market from a long-term point of view could have some more tricks up its sleeve."

However, with so many question marks in the air – When will we get a vaccine? Will trade with China hold up? Who will be in the White House next year? – many investors might be reluctant to make bold stock bets. But they can still participate in any upside while avoiding single-stock ruptures by investing in some of Wall Street's best passive and active funds.

Low-cost provider Vanguard boasts more than a dozen funds that are ready-made for this kind of new bull market, while Fidelity offers some 15 tactical tools to squeeze more out of the next run higher.

Just remember to keep an eye on costs. Every dollar you pay in fees is a dollar that's not being compounded over time, so investors will do best with funds with no sales charges and lower-than-average annual expenses.

Enter the Kiplinger 25. This list of 25 low-fee funds includes products from across the provider universe, and tackles a number of stock and bond strategies. Here's the latest look at our favorite mutual funds.

A roller coaster session managed to finish in positive territory thanks to some big-name tech stocks.
Stock Market Today: Stocks Step Back Amid Economic Gloom

The market gave up its early momentum to finish lower after a disappointing business report and the ongoing impasse in D.C.