Since our first profile, this art museum has celebrated its 20th anniversary, doubled its size, and attracted more than 100,000 visitors each year. 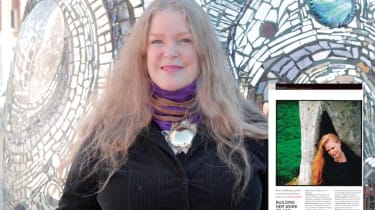 Rebecca Alban Hoffberger (pictured at left) appeared in our August 2000 issue, five years after founding the American Visionary Art Museum to spotlight the work of self-taught artists outside the mainstream. Hoffberger had raised $7.5 million from donors and persuaded the city of Baltimore to donate land for her project, which was designated a national museum by Congress and won the Urban Land Institute’s highest award for architectural design.

The museum, which just celebrated its 20th anniversary, attracts more than 100,000 visitors each year and has become a model for similar museums. It doubled the size of its campus in 2004, and Hoffberger, 63, continues to use her contagious charisma to attract a diverse group of supporters.

Her goal is to assemble exhibits that get people to think. “A lot of people who don’t like museums love coming to ours,” she says. The museum’s current Big Hope Show features art that reflects visions of hope, including many pieces by survivors of personal trauma—such as the dream home designed by a man who spent more than 40 years in solitary confinement before his conviction was overturned in 2013. The show also includes a tribute to a California state trooper who has talked more than 200 people out of jumping off the Golden Gate Bridge.

In addition, Hoffberger finds ways to empower Baltimoreans—for example, by hiring some museum employees from a homeless shelter, including three who have been on the staff for nearly 20 years. Mosaics on the museum’s exterior walls were created through an apprenticeship program for youth at risk of dropping out of school.

Hoffberger is applying that same focus to try to help her beloved Baltimore, which has suffered from crime, riots and a dwindling population. Earlier this year, she hosted the Big Hope for Baltimore conference and used her curator’s approach to gather brilliant minds from diverse fields to talk about ways to turn the city around.

And she’s looking toward the museum’s future, as well as her own. “Last year, I took my first sabbatical after taking not one day of vacation in 15 years,” she says. She visited friends who own a gallery in Poland and returned with even more ideas. Her goal is to raise a $25 million endowment so the museum can continue to thrive without her constant advocacy. “We’ve been offered West Coast land for an expansion, but we won’t expand until we have the endowment,” says Hoffberger. “That will mean I really have done my job. It’s very rewarding to see something flourish and become respected.”