Their mobile photo studio caters to families and business clients. 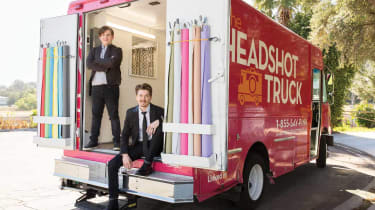 Kiplinger's spoke with William Harper, 32, co-founder of the Los Angeles-based mobile photo studio The Headshot Truck, about how he and fellow co-founder Brian Confer, 37, started their business. Here's an excerpt from our interview:

What did you learn? We rely on volume to keep our prices low, so we need to get clients comfortable as quickly as possible. We scrapped an industrial color scheme of black and gray in favor of a soothing scheme of pink, orange and white that makes clients feel as if they’re stepping into something special. We need two people on the truck, so the client isn’t alone, and we try to balance the genders. We play music. And we joke that our makeup artists are client whisperers.

How did you finance your start-up? Initially, from our own funds. In 2014, we used a Kickstarter campaign to outfit our first truck and raised $25,920. We’ve had positive cash flow from day one, and we’ve used it to expand. We’re talking with investors.

Are you making a living? Brian and I work full-time for the company and are financially supported by it. All the partners have been living like college students so that we can reinvest our profits in the company, with the hope of growing it as fast as possible.

It’s not all about profit? In L.A., we go to local pet adoption agencies and do glamour shots to help pups that wouldn’t otherwise stand a chance of getting adopted.

If so, there are several things you could be doing right now to put your business in the best position possible when you’re ready to put it on the mar…
17 People You Should Tip for the Holidays