Opening a bike shop let this couple turn their passion into a new career. 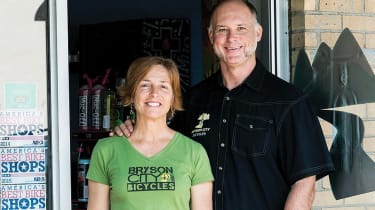 Kiplinger's spoke with Diane Cutler, co-owner of Bryson City Bicycles, a Bryson City, N.C.-based bicycle shop, about why she and co-owner Andy Zivinsky, left the safety of their 9-to-5 jobs to pursue entrepreneurship. Read on for an excerpt from our interview:

Why open a bike shop? We are lifelong bicyclists. I rode across the U.S. when I was 20, and Andy was an accomplished BMX racer as a kid. Andy had mechanical prowess and friends who owned a bike shop, so he thought a shop would work. I was against it. I'd been in bike shops my whole life, and I was never treated with respect. It was a "boys' club" kind of thing. But Andy said we could be inclusive.

How did you pick Bryson City? People come to western North Carolina from all over the world to visit the Great Smoky Mountains National Park and for world-class mountain biking in the Tsali Recreation Area. But Bryson City didn't have a bike shop. In 2008, we visited and realized it could be the place.

Did you write a business plan? Yes. We had to figure out how many people would come through our door in a tiny town and how that would translate to revenue from rentals and sales of bikes, apparel and service. We worked with the local chamber of commerce and the Small Business Technology Development Center at N.C. State.

How did you pay for your start-up? We needed $70,000. At the time, business loans were hard to get, but because our plan was so well thought out, we got a loan from a credit union. We sold a home in Raleigh and, after we moved in May 2009, we lived off the proceeds and my income from consulting with my former employer for six months.

How's business? We've averaged about $250,000 annually in revenue since we started. Bike people can't pass up a bike shop, and when they're on vacation, if they see something they like, they buy it. We try to carry brands that are solid but not necessarily the most well known or popular—brands that our customers can't get at home.

What's the most lucrative part of the operation? We kill it on bike and merchandise sales, and we do the industry average on rental and repair—the opposite of what we expected. But repairs are important. Because our customers are on vacation, if something goes wrong with the bike they bring, they can't wait a week for repair, so Andy fixes it right away. They're wowed!

Are you online? Yes. Last year, we entered Synchrony Financial's "Working Forward Small Business Awards" contest and won $20,000, half to be used to expand our business and half to better our community. We used the money to begin selling online, and we donated 17 mountain bikes to the local high school. We've also been named four times as "One of America's Best Bike Shops" by the National Bicycle Dealer's Association.

Are you making a living? We are making a living—not a killing—and we work more hours than ever before. But we do the things we love more often. We bike, hike, fly-fish and bird-watch, and we’re happier than we've ever been.