After close of a decade of uninterrupted bull market, it’s hard to find many stocks that truly qualify as cheap today. 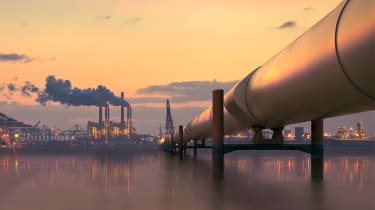 After close of a decade of uninterrupted bull market, it’s hard to find many stocks that truly qualify as cheap today. But not everything is pricey – you can still find values if you know where to look. And oil and gas master limited partnerships (MLPs), as a sector, are a screaming buy at today’s prices.

A combination of low interest rates, a shrinking pool of available shares due to buybacks and mergers, and a general lack of investable alternatives have all conspired to create one of the most expensive markets history.

To put numbers to it, the Standard & Poor’s 500-stock index’s cyclically adjusted price-to-earnings ratio (“CAPE”), which compares a 10-year average of corporate earnings to today’s share prices, clocks in at 31. That’s late 1997 levels. Meanwhile, the S&P 500’s price-to-sales ratio recently hit 2.0, putting it on par with its levels in 2000 … at the peak of the greatest bubble in market history.

However, pipeline MLPs are looking inexpensive at the same time they’re exhibiting greater quality. After a couple difficult years in 2014 and 2015, MLPs have gotten their leverage under control and started funding their growth projects with internally generated cash flow rather than new debt.

“After several years of deleveraging and structural simplifications – which unfortunately came with distribution reductions in several cases – MLPs as an asset class are in the best financial health we’ve seen in a long time with an increased focus on per unit returns and self-funding capital expenditures,” explains John Musgrave, Co-Chief Investment Officer of Cushing Asset Management. ”And based on current price-to-DCF and EV-to-EBITDA multiples, MLPs are exceptionally cheap by the standards of the past 10 years.”

Here is a look at seven solid MLPs that offer excellent return potential, very modest risk, and in many cases, high yields.

Data is as of May 7, 2018. Distribution yields are calculated by annualizing the most recent distribution and dividing by the share price. Distributions are similar to dividends, but are treated as tax-deferred returns of capital and require different paperwork come tax time. Click on ticker-symbol links in each slide for current share prices and more.

At the top of the list is one of the bluest of MLP blue chips, Magellan Midstream Partners LP (MMP, $68.09).

Magellan is primarily an oil and refined products pipeline and storage company and is based in Tulsa, Oklahoma. It started life in 2001 as a spinoff of Williams Companies (WMB), but has grown to become one of the largest and best-respected operators in the business.

MMP didn’t fall into the “growth at all costs” traps that some of its peers did a few years ago. Rather than leverage itself to the hilt to deliver breakneck distribution growth, Magellan kept a level head and managed its growth responsibly. But that didn’t stop it from raising its distribution every year since its 2001 initial public offering … and at a compound annual growth rate of a whopping 12%.

Magellan expects distribution growth (remember, MLPs make distributions, which are similar to dividends but have different tax treatment) of about 8% this year, which isn’t too shabby. And its current yield of 5.4% makes it very competitive in a world in which the average S&P 500 stock yields a pitiful 2%.

Enterprise Products is one of the oldest and best-respected MLPs you’re ever going to find. In an industry that has traditionally been run by cowboy capitalists, Enterprise has managed to stay remarkably level headed over the years and as reliable as Old Faithful.

Chase Robertson, Chairman of Houston, Texas-based RIA Robertson Wealth Management, says, “Enterprise Products Partners has been a core holding of our income portfolios for over a decade. It’s been a dependable workhorse for us, consistently raising its distribution like clockwork.”

Since going public in 1998, Enterprise has grown into one of the largest energy infrastructure companies in the world with approximately 50,000 miles of natural gas, natural gas liquids, crude oil and refined products pipelines and 260 million barrels of storage capacity.

Furthermore, like Magellan Midstream, Enterprise has eliminated the single biggest conflict of interest that has long plagued the MLP space: incentive distribution rights (IDRs). In a traditional IDR arrangement, the MLP’s general partner takes a disproportionate share of any distribution hikes to shareholders, which incentivizes them to bet the farm by raising distributions at an unsustainable pace. EPD and MMP eliminated IDRs years ago, which partly explains their more conservative profile.

Enterprise Products has raised its distribution every year since its 1998 IPO, and over the past decade, its annual distribution hikes have averaged just under 6%. At today’s prices, EPD shares yield 6.4%, which is exceptionally high by this MLP’s standards.

We started with two rock-solid and conservative MLPs in Magellan Midstream and Enterprise Products. Now, let’s look to get a little more aggressive with Energy Transfer Equity LP (ETE, $16.52).

Energy Transfer’s structure is a bit more complicated than many of its MLP peers. Energy Transfer Equity is the general partner and controlling entity of two other publicly traded MLPs, Energy Transfer Partners (ETP), which owns most of the empire’s pipeline assets. and Sunoco LP (SUN), which distributes fuel to gas stations in more than 30 states.

Energy Transfer’s complex structure has made the company somewhat unpalatable to Wall Street, and the company still has a little egg on its face after its aborted takeover bid for Williams Companies back in early 2016. But ETE has worked hard to rebuild its image, has made it a priority to deleverage and has hinted in earnings conference calls that it may eventually follow the path of Kinder Morgan (KMI) by consolidating its empire into a single entity organized as a C-corporation.

We’ll see if or when that transformation takes place. In the meantime, investors can enjoy a solid 7%-plus distribution that, after a long pause, started growing again last year.

Magellan, Enterprise and Energy Transfer are all dominant, large-cap players in the midstream MLP space. Next up is a smaller, up-and-coming player, albeit one with strong financial backing and established relationships in place: Phillips 66 Partners LP (PSXP, $48.73).

It should be obvious that PSXP is not truly independent given its history and interconnectedness with Phillips 66. Essentially, PSXP was created as a way for PSX to make more efficient use of its midstream pipeline assets. But that’s not necessarily a bad thing. In fact, being affiliated with a larger entity like PSX can considered a source of stability. Furthermore, given that Phillips 66 owns 55% of Phillips 66 Partners, the parent company clearly has an interest in the success of its spinoff.

Investors have found little reason to complain. The company has increased its distributions at a 31% annual clip since its 2013 IPO, and the units currently yield 5.4%.

Again, that’s perfectly fine. It’s in RDS’s best interests to make a success out of SHLX.

Shell Midstream paid its first quarterly distribution in early 2015, and in the three years that have followed, it has raised the payout from just 10 cents per unit to 35 cents. Don’t necessarily expect distribution growth to be quite that aggressive going forward, but it still could be robust; the MLP raised its payout by about 20% over the past year.

Every MLP covered thus far has been primarily a midstream pipeline company, which makes sense. Stable, cash-flowing pipelines are ideal assets to spin off as standalone businesses, as they tend to be relatively recession-proof. Furthermore, pipelines fit a niche for yield-starved investors looking for income.

But MLPs are not limited to pipeline companies.

Unlike most midstream MLPs, CVR does not pay a steadily growing distribution. Refining is a highly cyclical business, and thus this company’s profits can vary wildly from year to year. CVR’s distribution is variable, in fact, rising aggressively in strong years and falling in weaker years.

CVR’s distributions have been all over the map over the past few years. In early 2015, its quarterly payout was a modest 37 cents per unit. By the end of that year, the payout had risen to $1.01 … only to disappear altogether for two years. There is nothing necessarily wrong with that, of course, so long as you understand that going into the investment.

You also need to understand that CVR is more speculative than most midstream MLPs, so this is not for risk-averse investors.

For decades, the United States has been a major importer of energy. While full energy independence may still be only wishful thinking, America is emerging as a budding export powerhouse in liquified natural gas (LNG).

This brings us to Cheniere Energy Partners LP (CQP, $31.17). Like several of the MLPs covered in this article, CQP was spun off from an established energy company, Cheniere Energy (LNG).

Interestingly, the Sabine Pass terminal was originally built with LNG importation rather than exportation in mind. But the onshore fracking boom created an abundance of natural gas, causing Cheniere to completely rethink its business model.

Cheniere Energy Partners started paying a quarterly distribution in 2007, but it remained frozen at 42.5 cents per unit for more than a decade, from July 2007 until November 2017. Since then, the MLP has raised its distribution three times to $0.55 per unit. That’s a 31% pop in just three quarters, with more likely to come.

If you believe in liquefied natural gas as a relatively clean and cheap source of energy, then Cheniere Energy Partners is a sensible way to play it.

Charles Sizemore was long EPD and ETE as of this writing.

Here are 13 dividend stocks that each boast a rich history of uninterrupted payouts to shareholders that stretch back at least a century.
Stock Market Today 10/26/20: Stocks Retreat as COVID's Second Wave Grows

Investors let go of stimulus hopes and embraced COVID fears on Monday as cases surged both in the U.S. and abroad.