Microsoft cofounder Bill Gates is the richest man in the world, with an estimated net worth of $86 billion, according to Forbes. 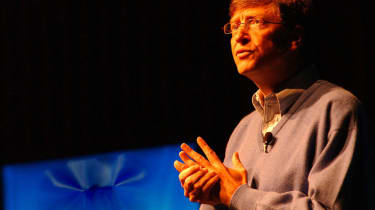 Microsoft cofounder Bill Gates is the richest man in the world, with an estimated net worth of $86 billion, according to Forbes. He's also one of the world's largest philanthropists, running the Bill & Melinda Gates Foundation alongside his wife. The activities of the foundation are funded by a trust, which holds investment assets donated by Gates. (The trust also receives donations from fellow billionaire Warren Buffett.) For his own benefit, Gates has Cascade Investment, his personal wealth management firm, headed up by Michael Larson.

If there's a common thread that runs through the holdings in both portfolios, it's that Gates favors simple business models that generate dependable cash flow, says Brian Bollinger, president of Simply Safe Dividends, which tracks Gates's stock holdings. "Larson is primarily focused on buy-and-hold value investing,” Bollinger says. "He goes wherever there is value."

Gates is no doubt more concerned with capital preservation than rapid appreciation at this point. Dividend stocks help get the job done because they can add ballast to a portfolio when the market gets stormy. "Safe dividend stocks will continue paying reliable income even if their stock prices are temporarily in the dumps," says Bollinger. "It makes it easier to stomach volatile stock prices and stay the course."

If steady income is important to the health of your portfolio, you could do worse than follow the lead of Gates. After sifting through the publicly disclosed holdings in the billionaire's personal and charitable portfolios, we identified five of the most attractive dividend stocks owned by Bill Gates.

Data is as of April 6, 2017, unless otherwise indicated. Click on symbol links in each slide for current share prices and more.

(Stocks are listed in alphabetical order. Market capitalization, provided by Zacks.com, represents current share price times the number of share outstanding. Dividend yield is calculated based on the last four quarterly dividend payments. Analyst ratings are per Zacks. Gates’s holdings were identified with the help of S&P Global Market Intelligence and through the most recent regulatory filings.)

Ecolab provides water treatment and other industrial-scale maintenance services for the oil and gas industry. That means its fortunes wane when energy companies cut their spending in response to falling oil and gas prices. The current yield is modest, but over the long haul Ecolab has proved to be a winner, thanks in large part to a dividend that dates back 80 years. Indeed, the company's dividend prowess has earned it membership in the so-called Dividend Aristocrats, a group of Standard & Poor’s 500 stocks that have raised their dividends annually for at least 25 years in a row.

The Gates trust, which funds the work of the charitable foundation, holds more than 4 million shares of Ecolab. More than 28 million shares are held by Cascade Investment, Gates's personal asset manager.

Shipping giants UPS and FedEx (FDX) have long enjoyed a wide moat that protects them from would-be competitors. Building a global delivery network is complicated and enormously expensive. Analysts at UBS say Amazon.com (AMZN) could emerge as a formidable rival in the package-delivery space in the not-so-distant future, but for now UPS’s business appears safe. So too does its dividend, which UPS has raised every year since 2002, with the exception of 2009, when it kept its payout steady as the global economy struggled to recover. (FedEx also has a good track record of regular dividend hikes, but its current yield is much lower than that of UPS.)

The nation's largest drugstore chain by store count is about to get even bigger. A deal to buy Rite Aid is expected to close later this year, adding thousands more locations to the 13,000-plus stores that Walgreens already operates in 11 countries. Tracing its roots back to a single drugstore founded in 1901, Walgreens has boosted its dividend every year since 1975. It merged with Alliance Boots in 2014 to form the current company.

Gates’s stake in Walgreens – about 3.5 million shares – is held by the trust. Cascade doesn’t report ownership on any shares of the drugstore chain.

Warren Buffett sold almost all of the Walmart shares owned by his umbrella company, Berkshire Hathaway (BRK.B), at the end of 2016, largely because of relentless competitive pressure from online retailer Amazon.com. Gates seems to have held fast. Maybe it’s because there are good reasons to be patient with Walmart, Bollinger says. "I would be surprised if [Cascade investment chief] Larson sticks around with Walmart beyond the next year or two, but there's not a great urgency to exit Walmart today. The stock's price-earnings multiple is at a double-digit discount compared to the broader market, and Walmart still enjoys a defensive, recession-resistant business."

The Gates trust own nearly 12 million shares of the world's largest retailer; Cascade owns none.

Waste Management’s revenues aren’t particularly sensitive to economic cycles for one simple reason: There will always be garbage. That steadiness has helped the company raise its dividend every year since 2004, a span that included the Great Recession. The company also generates buckets of cash (after operating expenses and capital spending), which should keep the payouts coming.

Here are 13 dividend stocks that each boast a rich history of uninterrupted payouts to shareholders that stretch back at least a century.
Is the Stock Market Open on Thanksgiving and Black Friday 2020?

The stock market will take a pause on Thanksgiving, but investors will need to pay attention for a few hours on Black Friday.
Peering Past the Pandemic

I’m looking forward to a time when lunches with the girls (or guys), volunteering and travel will resume.