Let's say you've hit a certain age -- after the kids have flown the nest and there's no longer a need for that child-friendly minivan -- when you might start itching for a little more excitement in your daily ride. 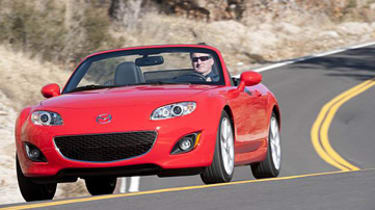 Let's say you've hit a certain age -- after the kids have flown the nest and there's no longer a need for that child-friendly minivan -- when you might start itching for a little more excitement in your daily ride.

Some seasoned car buyers might want to relive their youth and hark back to what was cool in the days of convertibles and drive-in movies; others might decide to keep things a bit more modern with hipper, greener vehicles.

You don't have to spend a fortune to get a midlife pick-me-up. We took the hottest vehicles ranging from $16,589 to $62,750 and ran them through Kiplinger's rankings -- which reward gas mileage, resale value and safety as well as performance -- to find the best values. There's something for everyone on this list, whether you want a superfast roadster or you want to feel younger (and cooler) -- as responsibly as possible, of course.

Take a look at our top picks, and tell us which is your favorite by leaving a comment below.

Looking for an edge? Remember Steve McQueen roaring through the streets of San Francisco in the 1968 cop flick "Bullitt"? That was a dark green Ford Mustang GT 390 he was driving.

The Mustang has been a legit revival-muscle-car choice since its 2005 makeover, which revived design cues from the 1960s classic pony car. The redesign of the 2011 -- a Kiplinger's Best New Car winner -- hasn't strayed far from those roots, but the powerful V8 is capable of angina-inducing speeds and makes the new-era Mustang a very muscular car. Just stay within the speed limit, and obey all traffic laws.

Many celebrity players have driven Porsches over the years, but few were cooler than 1950s film star James Dean. Dean's love of Porsches became legendary after his untimely death at the age of 24 while driving a 550 Spyder.

If all you desire is two seats and the feel of the wind tousling your hair, then the automaker's Boxster convertible model is a good choice. It corners and brakes like a dream, and the engine is placed mid car, so there's storage fore and aft. The Spyder has a larger engine and more horsepower. If money is tight and you can sacrifice some speed, you can't go wrong with the base Boxster, which costs $13,000 less.

Despite its Japanese pedigree, the Miata was inspired by such Euro roadsters as the MGB and Triumph TR6.

Like those forebears, the Miata isn't superfast (its zero-to-60 time is roughly the same as the Honda Accord's). Rather, it's responsive and stripped to the essentials, so you feel connected to the road. The redesign of the 2006 model made it large enough to comfortably accommodate drivers up to 6 feet 1 inch tall.

Touted as "The Great American Sports Car," the Corvette will be 60 years old in 2013, around the same age as many boomers old enough to remember the original fiberglass model. If speed is what you need, try zero to 60 in 4.2 seconds from a beastly (and noisy) 6.2-liter V8 engine in today's version.

The original 1953 Corvette offered a heater and AM radio as standard features. Nowadays, Bluetooth technology, heated seats and satellite radio are counted among its basics. You also get a large cargo area, so you and your traveling partner can fit a couple of suitcases in for a real road trip. At under $50,000, it remains one of the best sports car bargains around, despite costing far more than the first-generation model, which clocked in at under $4,000.

Despite their higher price tags, green cars are starting to gain in popularity thanks to rising energy costs. Perhaps one of the most well-known mid-lifers to hop on the hybrid bandwagon is curmudgeon Larry David of "Curb Your Enthusiasm" fame, who likes to flaunt his very own Toyota Prius on the show.

Our green-car pick, the electric-powered Chevrolet Volt, might not pop into your mind as a midlife-crisis car, but it was one of the most heavily marketed, highly anticipated introductions by a carmaker in years. Volt drivers are perceived as environmentally conscious early adopters -- and that can make you feel good about yourself.

The G is sort of a stealth midlife-crisis car. No one -- maybe not even your spouse -- will raise an eyebrow and suspect that you are compensating for a lack of excitement in your life. But the rear-wheel-drive sedan's 3.7-liter V6 ensures quick acceleration, and its agile handling lets you take curves at steering-wheel-gripping speeds. Meanwhile, the G is reliable, and you can even fit the kids or your in-laws in the back seat without damaging their knees.

Members of Generation X, who are coming of age for a midlife crisis (assuming they can afford one), don't share boomers' nostalgia for muscle cars. In fact, they may not have much nostalgia for cars at all, which were generally a fairly sorry lot when they were in their teens. A fun exception back then was the Jeep, and today's Wrangler retains the spirit and style of its forebears.

The proclivity of early models to flip over has largely been overcome by extending the length and the wheelbase (and more recently, electronic stability control); the Unlimited series even comes in a four-door model. And remember, it's a convertible, too. Take it to a trailhead, or drive it along the water's edge one night and let the wind blow through your hair -- or what's left of it.

Introduced in 1955, Ford's Thunderbird convertible is a sleek, shiny beacon to a generation of car lovers who grew up in the late 1950s and 1960s. Even the Beach Boys sang the T-Bird's praises in their 1964 song, "Fun, Fun, Fun."

Ford later tried to turn it into a luxury sedan and kept it in production until the late 1990s. In 2002, the automaker revived a retro-look model, but the car was eventually shelved for good in 2005. Thelma and Louise took a 1966 Thunderbird for a wild ride in the 1991 movie of the same name, showing that the ladies like a little wind in their hair, too. But for heaven's sake, stay within the speed limit and obey all traffic laws.

SLIDE SHOW: 10 Cheapest Cars to Own

Want to spend less on transportation? Step 1 is a car that’s used, but not used up.
Protecting Your Car During COVID-19