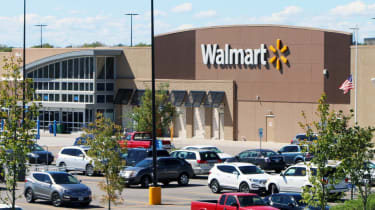 If Walmart is on your list of stores to shop on Black Friday, get ready to score huge savings. The big-box retailer is going toe-to-toe with competitors in a variety of product categories -- from clothing to small appliances to toys -- and offering exclusive incentives to get customers in-store and shopping online. Select deals will be available on Walmart.com starting at 10 p.m. ET on Wednesday, November 27, while in-store doorbusters go on sale starting at 6 p.m. local time on Thanksgiving Day.

Holiday shoppers who plan to brave the in-store crowds can download the Walmart app where you’ll get access to a color-coded store map. You’ll be able to pinpoint exactly where all of the coveted items on your shopping list are located. If you’re on a tight budget, this will help you cut down shopping time and eliminate impulse purchases. Another bonus: Walmart will be dishing out cups of coffee and hot chocolate, as well as snacks for loyal customers waiting to get inside starting at 4 p.m. local time on November 28.

With help from a few of our favorite smart-shopping gurus, we’ve rounded up 10 Walmart Black Friday doorbuster deals you don’t want to miss at the world’s top retailer.

Sleepwear Sets. Typically, it’s best to wait until the weeks following the holidays to purchase winter apparel. That’s when you’ll see the deepest discounts as retailers start to prepare for spring. However, plush pajamas for the entire family ranging in price from $4.75 to $10 are an example of why shoppers flock to Walmart on Black Friday, says smart-shopping expert Trae Bodge of TrueTrae.com. Pajama sets for babies and big kids will be on sale for $4.75. Women’s novelty sleepwear pants and men’s fleece pants will be priced at $5. Women’s two-piece sleepwear sets will be available for $10.

Google Home Mini. Walmart continues to go toe-to-toe with other big-box retailers when it comes to its Black Friday deals on smart home devices, says Cheapism.com staff writer Saundra Latham. You can snag a Google Home Mini device for $19 in four color options. Best Buy and Target have the same device priced around the same amount, but what makes Walmart’s deal worthwhile is that it comes with a $5 credit for Vudu, a streaming service where you can rent or buy movies and television shows.

Philips 65-Inch 4K Android Smart TV. Widescreen televisions are one of the most sought-after Black Friday doorbuster deals no matter the retailer. Every year, Walmart stands out because they usually offer a can’t-miss deal on a large 4K smart TV for less than $300, Latham says. This year, the big-box retailer doesn’t disappoint. They’ll have a Philips 65-Inch 4K Android Smart TV on sale for $278, while supplies last. The television set comes from a trusted brand and its features include Android TV, a built-in Google Assistant and streaming apps such as Netflix and YouTube.

PlayStation 4 1TB Game Bundle. Super low prices on video game bundles are always a crowd pleaser. So much so that they tend to sell out quickly. Walmart will have the Playstation 4 1TB Game Bundle available for $199, which is a steal compared to the current version that’s priced at $316, says Retail Me Not’s shopping and trends expert Sara Skirboll. You’ll save more than $100 off the regular price. This year’s Black Friday deal includes a game console and controller, a remastered version of The Last of Us video game, as well as digital downloads of the God of War and Horizon Zero Dawn games.

Roku Ultra With JBL Headphones. If you’ve been coveting an Apple TV, but don’t want to pay the hefty $179 price tag (32 GB), Walmart has a budget-friendly alternative, Skirboll notes. The Roku Ultra is a fraction of the price marked down 50% to $48 (originally $99) for Black Friday and comes with a pair of JBL in-ear headphones. Shoppers who snag this deal will also receive a $5 Vudu credit. You’ll also get a three-month free trial for TV and movie streaming app Hulu, as well as the music streaming app Pandora.

iRobot 670 WiFi Vacuum. Walmart’s small appliance doorbuster deals are often hard to beat. Robot vacuums continue to be a hot-ticket home item and you can score one for under $200 at the big-box retailer, Latham notes. The iRobot 670 WiFi Vacuum, which is compatible with Google Assistant, will be on sale for $197 (marked down from $244). You’ll save nearly $50.

Instant Pot Vortex 6-Quart Air Fryer. Air fryers have been all the rage in the small kitchen appliance space and that doesn’t seem to be changing any time soon, suggests Casey Runyan, managing editor of deals site BradsDeals.com. Walmart is offering one of the better deals among competitors selling digital display air fryers. Holiday shoppers can pick up Instant Pot’s Vortex 6-Quart Air Fryer for $49, marked down from $99. That’s 50% off the original price. Best Buy has a 6-quart version from another brand priced at $50, while Target has a smaller 3-quart air fryer from another brand also for $50.

Barbie Helicopter or Glam Convertible Car. A variety of Mattel’s Barbie products have landed on best toy lists this year, which has helped put them in high-demand, Bodge says. If you’ve already got Barbie dolls on your holiday shopping list for the kids, considering surprising them with Barbie’s companion helicopter or glam convertible car, which will be on sale for $10 each (marked down 50% from $19.98) at Walmart.

Neon Vector Two-Wheel Scooter (Non-Motorized). Scooters (non-motorized and motorized) continue to be a hot holiday gift item for kids, Bodge says. Walmart will be offering a $15 doorbuster deal on this non-motorized scooter, which has light-up wheels. With Black Friday doorbuster prices on two-wheel non-motorized scooters at Target and Kohl’s ranging in price from $18 to $20, you’ll save a few more bucks by snagging this deal at Walmart.

Paw Patrol Vehicles (Assorted Variety). Bodge notes that depending on what you plan to purchase, toys may not always be a smart buy on Black Friday (prices tend to drop even lower in December), but Walmart’s super low price on this popular Disney cartoon toy item is hard to pass up. Parents looking for inexpensive stocking stuffer ideas or gifts to give to the children of extended family members and friends may want to stock up on these Paw Patrol toy cars priced at $5 (originally $9.84). That’s nearly a 50% discount.

Before tossing these items into your virtual shopping cart, be sure to read Amazon's return policy first.
10 Things You'll Spend More on in Retirement

We spend a lot of time worrying about running out of cash in retirement. But you might be surprised to see some of the things you'll find yourself spe…
18 Things You Should Know Before Shopping at Trader Joe's