Sky-high salaries and endorsement deals mean nothing if players don’t properly manage their riches, as several sad stories can attest.

by: Patrick B. Healey, CFP® MBA 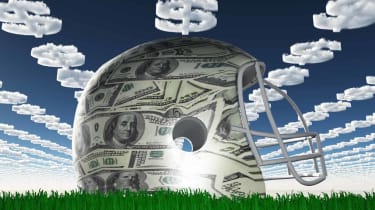 Professional athletes in major American sports leagues command enormous salaries, with contracts often in the multimillion-dollar per year range. Endorsement deals can make those salary figures look small by comparison, in some cases doubling or tripling the earnings of already well-compensated athletes. The income numbers can sound outrageous in comparison to the wages an average American worker lives off of comfortably. So, why do so many of these high-earners end up broke?

A massive body of evidence suggests that most pro athletes fail to make good investment decisions with their high incomes. More than three out of four NFL players end up bankrupt within two years of retirement. With NBA players, that count is three out of five players. These aberrantly high statistics are the result of a convergence of factors, including reckless spending and short careers, but one contributor stands out above the rest: deficient financial advice.

The Root of Poor Decision-Making

From well-intentioned family members who lack the financial experience to provide good guidance to malicious actors within a player's inner circle, bad advice can come from many sources. Former Tennessee Titans and University of Texas quarterback Vince Young, for instance, filed for Chapter 11 bankruptcy within seven years of inking a $25 million deal with the Titans. Young later admitted that he entrusted his finances entirely to his uncle and a vague "financial adviser," neither of whom encouraged him to make responsible investments or curb his unsustainable spending.

Hall-of-Famer Dan Marino famously lost over $13 million on an ill-advised media investment when the company went bankrupt in 2012. Every investor is subject to poor decision-making and the tides of the market, but investments like these are fraught with risk from the beginning. A qualified financial adviser would have been much more likely to catch the vulnerabilities evident on the media company's balance sheet than was Marino himself.

Improvement on the Horizon

To respond to the well-documented trend toward financial irresponsibility, the NFL Players' Association recently amended its guidelines to mandate that all its Registered Player Financial Advisors must have either a CERTIFIED FINANCIAL PLANNER™ or Chartered Financial Analyst certification. The term "adviser" is vague and fraught with uncertainty; the move to require advisers to have a CFP® or CFA is important because it adds transparency to the level of service players are getting from their league-endorsed counsel.

The Players' Association's decision is a clear nod to the unique set of challenges that its athletes face. They may enjoy annual incomes most of us can only dream about for a short period of time, but that cash flow can come to an abrupt halt with one injury. The average length of an NFL career is just over three seasons. For that reason, it is critical that players make the most of their limited time at the apex of their earning potential. Taking a step toward ensuring that players only work with qualified financial planners who can legitimately serve the best interests of the athletes should help mitigate the risk of a completely squandered fortune.

How Players Can Minimize Their Risk

While the Players Association has done its part, it remains the responsibility of the athletes themselves — in the NFL and across other leagues — to take a degree of ownership over their economic lives. It is increasingly a necessary step to ensure that only CFP® practitioners or CFA certificants are considered, but a level of vetting and decision-making still falls to the individual. Multiple candidates should be interviewed to assess their level of experience and fit for the athlete's risk and earnings profile.

Ultimately, it is a step in the right direction to recognize that your financial future cannot be placed in someone’s hands if they have not demonstrated the proper level of experience. That cannot be the end of the process, however. Players should strike a balance between letting their advisers do their job and having a good sense of where their money is going. Blissful ignorance should never be an option, as Vince Young might attest. A level of understanding is the best safeguard against winding up as the next financial horror story.

Every situation is different. Some players make more money than others and can afford to be flexible in how their capital is allocated. With that said, there are some shining examples of fiscal conservatism that new entrants to these professional leagues would be wise to emulate.

Running backs Saquon Barkley and Marshawn Lynch, for instance, committed early in their careers to live only off their endorsement earnings and to save the full amount of their salaries. While this level of commitment may not be feasible for every player, the spirit of the decision is commendable. To the extent that players can embrace conservative spending habits and maximize their rates of savings and investment, advisers should encourage them to do so. The risks are too well-documented to claim ignorance any longer.

The opinions in the preceding commentary are as of the date of publication and are subject to change. Information has been obtained from a third party sources we consider reliable, but we do not guarantee the facts cited are accurate or complete. This material is not intended to be relied upon as a forecast or investment advice regarding a particular investment or the markets in general, nor is it intended to predict or depict performance of any investment. We may execute transactions in securities that may not be consistent with the report's conclusions. Investors should consult their financial adviser on the strategy best for them. Past performance is no guarantee of future results. Kalos Capital, Inc. does not provide tax or legal advice. The opinions and views expressed here are for informational purposes only. Please consult with your tax and/or legal adviser for such guidance.

Patrick Healey is the founder and president of Caliber Financial Partners and has over 20 years of experience in the financial services industry.