The One Biotech Stock That Looks Like a Bargain These Days

Gilead Sciences, the largest biotech company, has a P/E ratio of only 11. 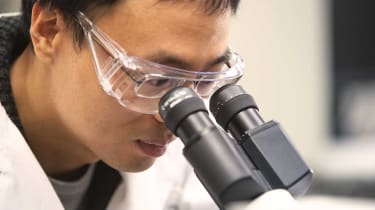 Over the course of this long bull market, biotech stocks have been very, very good for their owners. Perhaps too good. Investors have shown such rabid enthusiasm for biotechs—especially small, unproven companies that have yet to bring a drug to market—that some observers are using another b word to describe the high-flying sector: bubble.

Short-term returns—and valuations—of individual stocks are stunning. Juno Therapeutics (JUNO), which is developing cancer drugs, went public in December at $24 per share. It rocketed to $62 and now trades at $53, giving the company, which has no sales, a market value of $4.8 billion. (Share prices and returns are as of March 6.)

There are legitimate reasons for the fervor. Industry insiders say the pace of innovation has never been greater, and the Food and Drug Administration is approving more drugs more quickly than ever.

Finding success stories remains a challenge, however. Share prices of companies that win approval for their drugs or show enough promise to be acquired by one of the industry’s big players can double or triple in a flash. Companies, especially young ones, whose drugs flame out during testing often run out of money and leave their shareholders with massive losses. “To invest in individual names in this field, you need nerves of steel and confidence that you understand the science,” says Morningstar analyst Robert Goldsborough.