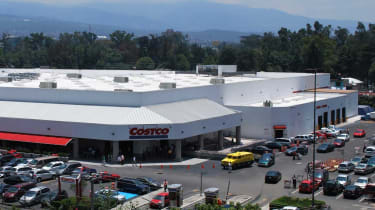 Don't blame owners of Costco Wholesale (COST) stock if they're a little on edge as Thursday's earnings report nears. After a go-go half-decade that saw shares of this safe consumer staples play more than double between 2011 and 2015, Costco has delivered a total return of just 10% since Jan. 1, 2016.

But Costco investors may receive some respite after Thursday's closing bell, when the warehouse-style retailer reports earnings for its fiscal fourth quarter ended Aug. 27.

COST shares have climbed a mere 4% so far this year to vastly underperform the S&P 500 by 9 percentage points. While Costco has suffered from a few headwinds in 2017, the lion's share of the blame goes to Amazon.com’s (AMZN) $13.4 billion buyout of organic grocer Whole Foods (WFM), announced in mid-June. Costco joined the likes of Walmart (WMT) and Target (TGT) in quickly plunging on the news, and while all three have started to recover since then, COST remains off about 10% since.

The fear sparking the selling is that Amazon – using Whole Foods' physical locations as a distribution network – will better be able to build out its AmazonFresh grocery delivery service, further cutting into sales at brick-and-mortar operations such as Costco’s. However, now that Wall Street analysts have weighed in and investors have expressed their worries, the next step is waiting for reality to play out.

Given that it could be a long time between now and when Amazon begins to make a noticeable dent in the grocery market, that means the focus should shift back to actual operations. On that front, the odds favor Costco.

For one, Costco should benefit from a small bump in membership fees (an extra $5 for individual/business memberships; an extra $10 for “Executive”-level privileges) for about 35 million members effective June 1, 2017.

Costco also reported a 10% year-over-year increase in net sales for the month of August, which includes a 7.3% improvement in comparable-store sales. That latter figure far outpaces the 4.1% growth in comparable-store sales for the full 52-week period through August, but perhaps more important is that Costco is growing – something that much of the retail sector has struggled to do at all in 2017.

In fact, Wall Street's expectations for Costco's fiscal fourth quarter – roughly 14% growth in both earnings (to $2.01 per share) and revenues ($41.6 billion) – should have most retailers chartreuse with envy.

A beat Thursday would prove a much-needed reminder of Costco’s operational strength, and likely help put investors' Amazon fears on the back burner for a little while.