Is the Worst Over for Stocks?

Even if it isn’t, investors who wait for the market bottom may well miss it. 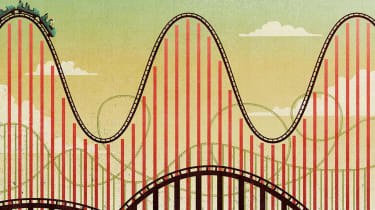 The bull market was the longest in history; its collapse into bear market status was accomplished in a record 23 trading sessions. Since the low on March 23 that lopped 34% off Standard & Poor’s 500-stock index, stocks have bounced back an incredible 29% in just 18 trading days, also unprecedented in modern stock market history. “Surprisingly,” notes Goldman Sachs chief strategist David Kostin, “the largest shock to the global economy in 90 years” has left the S&P 500, which closed at 2875 on April 17, just 15% shy of the record high set in mid February. Not surprisingly, investors are asking: Is that it for the bear?

We’ll only know in hindsight. In mid April, the death toll from COVID-19 continued to mount, post-pandemic unemployment claims passed 26 million, and volatile oil prices roiled the market, raising questions about whether the economy was in even worse shape than it seemed. But hopeful signs also emerged. Boeing Co. announced it would resume production of commercial jets in Washington state. Johnson & Johnson, Procter & Gamble and Costco Wholesale bucked the recent trend of dividend cuts and suspensions by raising their payouts. Countries in Europe began to relax travel restrictions and business closures, and as the rise of new infections started to slow here, states began to unveil their plans for restarting the U.S. economy.

Still, investors who simply revert to the buy-the-dip strategy that became reflexive in recent years should think twice, says Stephen Suttmeier, chief technical strategist for stocks at BofA Global Research. “I find it hard to believe that we’re going to just go to new highs here,” he says. He expects stocks to meet resistance at levels between 2800 and 3000 on the S&P 500, which is where many investors turned bullish last year. “They didn’t get a chance to get out, given how fast the decline was. They’ll be looking to get out closer to breakeven,” he says. If the S&P 500 fails to hold the 2650 level, says Suttmeier, the next stops on the way down could be somewhere around the March 2020 or December 2018 index lows, between 2200 and 2350, and after that, 2000 or below.

Downright ugly. Corporate earnings season will ramp up over the next few weeks. A year ago, analysts expected first-quarter 2020 profits for S&P 500 firms to be up more than 15%, on average, from 2019’s first quarter. Now, those estimates call for a 13.5% decline, with earnings for the consumer discretionary, financial and industrial sectors all down more than 30%. Energy stocks are looking at profit declines of 58%, according to consensus estimates. Economic reports will be equally disheartening. But investors should remind themselves that these are backward-looking data in a forward-looking market, say Goldman Sachs strategists. Barring a resurgence of coronavirus infections as the economy reopens, the market could well stay focused on expected economic and profits recoveries in 2021.

Consider, too, the unique nature of this crisis. Normally, bear markets unfold over time, as economic reports gradually weaken. This time, says Jim Paulsen, chief strategist at investment firm Leuthold Group, “there was no debate about whether we were heading into a recession—it was recession by proclamation.” That explains the “warp speed” bear market and the immediate, dramatic policy response from the Federal Reserve and the federal government, says Paulsen. “I’m not saying there’s not going to be a setback. But I think the low is in.”

Investors who wait for a market bottom may miss it, Paulsen adds. During the bear market of 2007–09, the S&P 500 was below its 2008 low for only nine trading days, even though the ultimate bottom on March 2009 was 10% lower in price. Measured from the November 2008 trough, the S&P 500 was 45% higher one year later. “Who cares where the low is in the next four to five months if a year from now you’re higher?” says Paulsen.

How to invest. Given the degree of uncertainty surrounding the market’s next move, investors should stick with high-quality stocks that have strong balance sheets, competitive advantages and good growth prospects. Tech titans that led the bull market and have survived the bear are also good choices.

If history is a guide, then the sectors that fall the furthest during a bear market will lead the way out. This time around, that would be energy, financials and industrials—although energy firms struggling with plunging demand, persistent oversupply and oil prices at a multi-decade low might be too risky for most. BofA’s Suttmeier says it’s too early to make a sector call—with a notably defensive exception: “Health care is a sector we’ve gone to all year,” he says.

Bonds can be more complex than stocks, but it's not hard to become a knowledgeable fixed-income investor.
14 Hot Upcoming IPOs to Watch For in 2020 and 2021

Check out our earnings calendar for the upcoming week, as well as our previews of the more noteworthy reports.
Warren Buffett Stocks Ranked: The Berkshire Hathaway Portfolio