Don’t Give Up on Financial Stocks

Financials are having a volatile year, but investors should remain patient with them &mdash; and consider Financial Select Sector SPDR, one of our favorite ETFs. 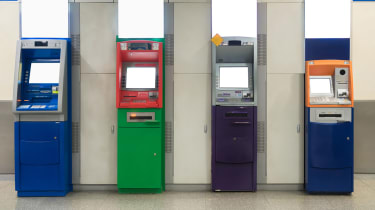 A strong economy and rising interest rates should be lifting financial stocks. But the Financial Select Sector SPDR (XLF) exchange-traded fund was up just 2.9% over the past 12 months, lagging Standard & Poor’s 500-stock index by nearly eight percentage points. It’s been a bumpy ride, too. Were it not distressing for investors, the volatility would be “comical,” says CFRA strategist Lindsey Bell.

In recent months, financial stocks have meandered up and down. They rallied, for instance, ahead of a late-September rate hike by the Federal Reserve, only to drop afterward as inflation fears kicked in. A week later, shares were up again in response to a widening of the so-called yield curve—the difference between rates of the 10-year and two-year Treasury notes. (A narrowing gap can trigger recession fears.) Days later, in mid October, after several big banks reported third-quarter earnings, some shares were up and others floundered.

Bell, who has a neutral outlook for the sector, finds little to get excited about with regard to financial firms. Stock prices already reflect the potential boost from rising rates, says Bell. Loan growth has been weak and trading volume and investment banking fees have been “muted,” she adds.

Financial Select Sector SPDR has seen mixed results among its holdings as certain pockets of the financial sector have done better than others. The ETF tracks an index of 67 financial companies, including big banks and regional banks, brokerage and investment management firms, consumer finance companies, and insurers. Consumer finance and diversified financial firms outperformed investment and insurance companies over the past year, on average. Shares of two of the fund’s biggest holdings, JPMorgan Chase and Bank of America, both gained 14% over the past year. Some smaller stakes have been a drag, including two asset management firms—Invesco (which slipped 43% over the past 12 months) and Affiliated Managers Group (down 36%)—and insurance firm Brighthouse Financial (down 29%).

Still, we think investors should remain patient with financial stocks, and we’re keeping this fund in the Kiplinger ETF 20, the list of our favorite ETFs. The near-term earnings outlook for financials is rosy, in part because the sector is a major beneficiary of cor­porate tax reform. For the fourth quarter of this year, CFRA expects financial stocks to report an average 31% increase in quarterly earnings compared with the year before.

Next year, earnings growth at financial firms is expected to taper to 10%, in line with expectations for the S&P 500. Even so, Wells Fargo Investment Institute says financial stocks are attractively priced. Financial stocks trade at an average price-earnings ratio of 12, based on earnings estimates for the coming 12 months. That’s one of the lowest P/Es of the 11 sectors in the S&P 500, which trades at a P/E of 16.

Bonds can be more complex than stocks, but it's not hard to become a knowledgeable fixed-income investor.
The 5 Best iShares ETFs for a Core Portfolio

You can assemble a simple, diversified and dirt-cheap portfolio using just a handful of the best iShares ETFs from its 'Core' series.
Best Bond Funds for Every Need