6 Reasons I'm Worried Derivatives Could Take Down the Economy Again

Savers and investors should be concerned that another round of bank failures could happen anew. 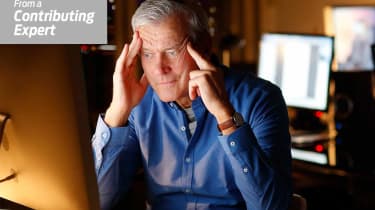 A number of years ago, Warren Buffett referred to derivatives as "financial weapons of mass destruction." Since then, Wall Street has tried to pooh-pooh this description, but the facts speak for themselves.

What is a derivative? Basically, it's a bet couched as a complex financial instrument. Investopedia defines a derivative as "a security with a price that is dependent upon or derived from one or more underlying assets." More simply put, two institutions, usually banks, bet on the direction of an underlying asset, which might be stocks, bonds, interest rates, gold, currencies or indexes. For a more entertaining if depressing explanation, see the movie "The Big Short."

Initially, derivatives were a hedge on a position held by the bank. For example, if a bank had a large portfolio of corporate debt, the portfolio manager might protect that position by using derivatives to take an opposite position, thereby hedging the holdings.

This is no longer the case. Today, banks are playing the derivatives markets far in excess of any holdings they have. So they are not hedging their holdings; they are speculating.

As an investor, you should understand and be wary of this practice. Here's why:

(Note: All data that follows referring to the amounts of derivatives is from the Office of Comptroller of the Currency's September 2015 report.)

Remember the collapse of Bear Stearns, Lehman Brothers, AIG and Fannie Mae? They were some of the main reasons the 2008-2009 financial crash happened. They all failed due to derivatives. Derivatives have been described as a daisy chain; when one falls, others fall.

A perfectly hedged derivative position will have opposite bets with Bank A and Bank B. So if a position loses with Bank A, it wins with Bank B. Sitting in the middle, sometimes, is a third bank just handing money from one bank to the other, earning a small cut in the transaction.

That small cut amounts to a total of $23 billion in revenues, according to the OCC, as of the trailing 12 months ended September 30, 2015. That sounds like a lot of money, and it is. But the banks are trading $247 TRILLION to earn the $23 billion—a profit margin of 0.0093%. That's an awful lot of risk for such a small return. But put yourself in the shoes of a big bank. Why worry? Bear Stearns got bailed out, AIG got bailed out, Fannie Mae got bailed out. (Sorry and so long, Lehman; they forgot about you.)

Let's say next time regulators really do get tougher. There will be no more bailouts. Instead, banks will do bail-ins. Essentially, banks bail themselves out instead of having taxpayers doing it. (It's complicated, but for detailed information, read the Federal Reserve Bank of New York's Why Bail-In? And How!) Bail-ins have already started in some debt-stressed European countries including Portugal, Cyprus and Italy. Other countries, such as Canada, Germany and others, are adopting the strategy also.

Yeah! No taxpayer money will be used for bailouts anymore. Right? Not really.

Here's the simple explanation: A bail-in is when a bank uses unsecured creditors to bail itself out. That would be you and me. When you deposit money in a bank, you think the bank stores your cash, but in reality, it uses it to make investments. In your eyes, your bank account is an asset. From the bank's perspective, you are an unsecured creditor, someone they owe money to. The Dodd-Frank Act specifically defines bank deposits as "unsecured creditors."

As it stands now, only deposits above the FDIC insured maximum ($250,000 per institution) would be used in a bank bail-in. So if you have, say, $50,000 in the bank, you are safe… sort of. For those of us that remember the Rhode Island banking crisis of the early 1990s, you might recall that when the Rhode Island Share and Deposit Indemnity Corp. (RISDIC) failed, savings and loans (S&Ls) had trouble, too. While insured, people didn't have access to their money for weeks and months. Some depositors weren't made whole for years. It was a mess. The next bump in the derivative road may be much worse than the last.

There are $247 trillion worth of derivatives at the top 25 U.S. banks and U.S. bank holding companies. The mind goes fuzzy when you consider numbers this big, so let me put it into perspective. The U.S. economy (annual gross domestic product or GDP) is about $18 trillion. That means banks have 13.7 times more money in derivatives than the entire U.S. economy. (It is not just U.S. banks playing with fire. According to Bloomberg and Deutsche Bank (DB), DB has about 55 trillion euros of derivatives, while Germany's GDP is only 2.70 trillion euros. DB's derivatives are 20 times Germany's GDP.)

The top six banks have the lion's share of the derivatives, $231.8 trillion. They have only $8.1 trillion in assets backing them up. That's a ratio of only 3.5%.

Have the banks learned their lesson from the 2008-2009 financial meltdown? They have reduced their holdings of derivatives by a whopping 15% since March 2009. That is less than a 3% decrease per year. Seems to me they haven't learned a thing.

On paper, the top 25 banks have 86.8% of their derivatives covered. Simply put, if they bet Asset XYZ is going up with Bank A, then they'd also bet XYZ is going down with Bank C, so they have a no risk position. Well, yes, theoretically. As long as Banks A and C stay solvent.

And that still leaves 13.2% not covered. That is a total of $32.6 trillion unhedged. That's more than double their (questionable) assets. It's a $32.6 trillion speculation. I thought banks were safe?

It is unclear what position derivatives will have in a bank failure. They could be considered a secured creditor since they have offsetting derivatives. But should banks even being playing with these "financial weapons of mass destruction" in the first place?

Investors could very well be directly and indirectly impacted by another round of bank failures due to derivatives. You might want to think twice about having assets in institutions with heavy derivative exposure. And watch out for a first domino to fall, the way Bear Stearns did in 2008; it could be a good early warning for the next crash.