Christina Soto paid off everything she owed while battling Hodgkin lymphoma. Here's how. 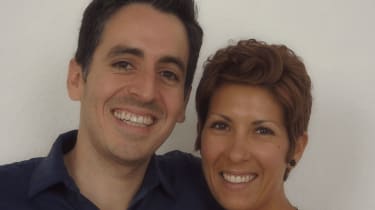 Christina Soto and her boyfriend, Andres Zuleta, didn’t consider themselves to be “in debt.” Yes, they both had credit card balances, she had a car loan, and he had a student loan. But they both were employed, making good money and living a comfortable life, she says. So the debt they had didn’t seem like a problem.

Then she stumbled upon the advice of author and radio show host Dave Ramsey, who advocates getting rid of your debt. “When we actually looked at the numbers, we realized we had $25,000 in debt,” Soto says. So she and Zuleta came up with a plan to quickly knock out what they owed. But you know what they say about best laid plans …

Actually, as a result of spending cuts, the couple were on track in early 2012 to wipe out their debts in nine months. That all changed, though, when Soto was diagnosed in April 2012 with advanced-stage Hodgkin lymphoma, a cancer of the lymph nodes. She had to stop working and start treatment immediately. The debt repayment plan was put on hold – but not abandoned.

Despite the cancer diagnosis, Soto still was determined to pay off her debt. She just had to readjust her repayment timeline. Fortunately, her disability insurance kicked in and replaced 75% of her lost income when she couldn’t work. But she incurred an additional $16,000 in medical debt during her 16 months of treatment.

Cut spending. Soto and Zuleta scrutinized their bank statements from the three months prior to launching their debt repayment plan. “It’s amazing how many times we swiped that little debit card without even thinking about it,” she says. To curb spending, they decided to use only cash for a while and gave themselves a weekly spending allowance, which helped them save about $500 a month. Two of the biggest cuts they made were to dining out and transportation. Soto says they went out to dinner four to five times a week before their financial wake-up call. So eliminating that habit meant big savings. And they sold one of their two cars. By carpooling, walking or biking to work, they saved another $500 a month, Soto says. Surprisingly, giving up a car was easier than giving up restaurant meals, she says.

Write goals and track progress. Soto and Zuleta made a list of every debt they owed and posted the sums on the refrigerator. They decided to start with the smallest balance first and work their way up to the largest. Whenever they paid off a debt, they marked it off the list. “You should’ve seen the happy dance we did when we knocked the last [debt] out,” Soto says. “It showed us anything you put your mind to, you can do it.”

Use rewards for motivation. Along with each debt they listed, they had a reward for paying it off. Most of the rewards cost little to nothing, such as a hike or nice home-cooked meal. In fact, the reward system wasn’t so much about purchasing things but rather about marking each accomplishment and enjoying it, Soto says. “We looked at paying off our debt as something that would make us feel good, not as a sacrifice,” she says.

Even after they paid off their debt and Soto returned to her job as a clinical supervisor at an orthodontist office, the couple continued living a frugal life to boost their retirement savings and to reach a new goal: to quit their jobs and start a business. At the end of 2013, they launched Boutique Japan, a travel company that creates personalized trips to the Asian nation. Soto also hosts a weekly podcast, The Cancer GamePlan, that features inspiring cancer stories.

Series I savings bonds are safe options, but don’t go all in.
8 Money-Smart Ways to Spend Your Tax Refund

Since this year's tax deadline was pushed back to July 15, many people haven't filed their tax return yet. That also means there are a lot of tax refu…
Skip to ContentSkip to Footer