The rebound is unequal, though, with makers of pricey items set to benefit more than those churning out staples.

Here’s one piece of economic news that bodes well for economic growth in coming months: Household net worth is on the rise. Between a 27% increase in the S&P 500 so far this year and housing prices that are rising at double-digit rates in most major markets, overall gains in household wealth are the strongest since at least 2005, two years before the financial meltdown and housing bust.

Why is that good news for economic growth? Because when consumers are sitting on a bigger stash — whether it’s held in a 401(k) stock portfolio or in the form of more equity in their homes — they tend to spend more, and that contributes to the virtuous economic cycle. More spending spurs more production, more hiring and more income, which in turn fuels even more spending.

Household net worth has increased dramatically since 2011, jumping $6.0 trillion in 2012 and $6.3 trillion through September 2013 to a total of $77.3 trillion. But to assess the impact of this on the economy, we need to measure wealth by how big it is relative to total disposable personal income. The graph below measures this for the two main components of household wealth, financial assets less liabilities and homeowners’ equity. Financial net worth has been rising steadily since the end of the 2008-2009 recession. Indeed, given the strong stock market performance of recent months, it is probably now at or near the previous peak — roughly 4.8 times disposable personal income. Meanwhile, homeowners’ equity, again measured as a multiple of disposable income, started rising in 2012 for the first time since the housing bubble burst and should soon return to a more “normal” range compared to its historical average. 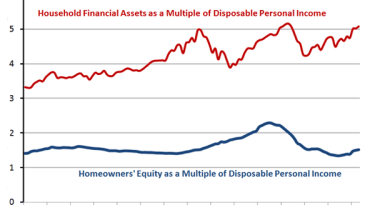 So how much of a bump to spending does more wealth provide? For every $100 increase in their home equity, homeowners save about $3 less for their golden years, instead spending it on movies, meals, apparel, new tech gizmos and hundreds of other goods and services. Similarly, for every $100 increase that consumers see in their financial portfolio, they reduce savings by about $1.50 and spend that.

Together, gains in home equity and financial assets could have added an estimated $30 billion to consumer purchases each quarter of the past two years. Consumers feeling wealthier could have especially been responsible for the recent run-up in spending on nonessentials such as luxury items, increased travel (see graph below), sporting and recreational equipment, and hobbies. 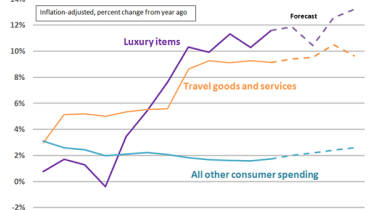 Of course, increases in household net worth benefit some types of goods and services a great deal more than others. Household wealth, and gains in it, aren’t distributed evenly across society. They’re concentrated among the very wealthy and the upper middle class. So, gains in the aggregate don’t mean that all consumers are better off. And makers and sellers of luxury items — pricey cars, boats, jewelry, and designer shoes, apparel and accessories, for example — are more likely to be blessed with higher sales than those who produce and sell toothpaste, toilet paper and other consumer staples. Moreover, wealth in the form of increased home equity can’t always be easily tapped. Still, over the past 30 years, the pattern is clear: When wealth rises, consumers as a group loosen their grips on their wallets and pump more bucks into the economy. And that can’t be bad.