With John H. Meyer’s creation, you can get paid to cover breaking news with your smartphone. 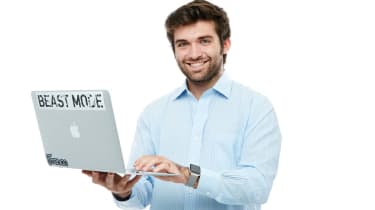 Kiplinger's spoke with John H. Meyer (pictured at left), 20, founder and CEO of Fresco News Inc., a New York City-based tech company, about what inspired him to start his own business and why he turned down a gig at Apple to pursue it. Read on for an excerpt from our interview:

I was inspired in 2007 when Apple announced that it would provide a platform to develop apps for the iPhone. Anyone with an idea could build an app and put it in the hands of millions of people. I taught myself Objective-C, the language used by the iPhone, iPad and Mac. In 2010 I founded TapMedia LLC, and by the time I graduated from high school I had developed about 45 mobile apps.

Where did you get the idea for Fresco?

After attending the Apple Worldwide Developers Conference in June 2013, I wanted to do something bigger, innovative and beautiful. I thought of an Instagram of news, a simple feed of captivating imagery with captions, to give viewers a sense of what’s going on in the world—fast. In my second semester at New York University, I put together a team to develop it. We launched the first version, for the iPhone, in May 2014. It’s free from the App Store.

The idea has evolved?

We’ve developed Fresco Dispatch, which lets any news organization send out requests for coverage to our mobile app users in an area. The media outlet can buy a user’s photo for $20 or video for $70. The outlet gets verified, royalty-free content. The user gets a credit and about two-thirds of the fee. We get a credit, too, and the rest of the fee. We tested and launched Dispatch last summer, and we have a backlog of news organizations that are interested in using it.

How did you finance your start-up?

With a brand-new idea, it’s difficult to get early investor interest. In the first year, I funded the business with the money I made from my apps. In September we raised $1.2 million in seed money from several angel investors.

You won a fellowship?

This year I won a Thiel Fellowship, which is a grant of $100,000 to support yourself for two years while you focus on work, research or self-education outside of a university. It helps quite a bit. [You must be under age 23, without a college degree, and agree not to enroll during the program.]

So you quit college?

I left NYU after a months-long conversation with my parents. It was initially very difficult for my mom, who is a professor at NYU. My dad was more understanding because he knows that I teach myself. I’ve learned more out of school than in school, through mentors, books and experience. For start-ups, you just can’t learn a lot of what you need in school. If I ever go back, it will be for a handful of classes that would benefit me.

And you turned down a job at Apple?

Yes, it’s crazy. All my life, I dreamed of working at Apple. I would have started as an intern, and it would probably have turned into a full-time job. But when I received the offer, things were moving at Fresco. I was excited about controlling the company’s mission and path. It was a no-brainer for me to say no so that I could build this company. It’s what I love doing.

What are your company’s prospects?

We’ve grown from three employees to 23. With what we’ve lined up from all the organizations ready to use Dispatch, we can hit $700,000 to $1 million in gross revenues by year-end 2015, and half of that will most likely be pure profit. We would reinvest most of the money to take Dispatch national and international.

A new chiropractor’s fledgling business plan to attract patients may sound reasonable at first look, but it’s actually against the law, and the same p…
Tax Changes and Key Amounts for the 2020 Tax Year

Americans are facing a long list of tax changes for the 2020 tax year...and it's never too early to start thinking about next year's return.
Post-COVID-19, Seniors Must Chart a New Path in the Workplace

Those most vulnerable to the pandemic will face challenges in the return to work, even as the recession means they may need their paychecks more than …
Skip to ContentSkip to Footer