He recycles shipping containers into pop-up retail shops and other structures. 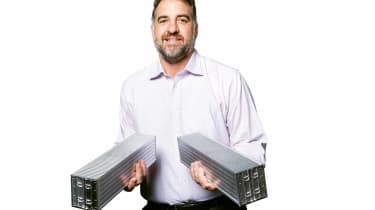 Kiplinger's spoke with David Campbell, founder and CEO of Boxman Studios, a Charlotte, N.C.-based company that customizes shipping containers for pop-up retail shops and other structures, about how he got started. Read on for an excerpt from our interview:

You were a commercial real estate developer? Yes. In 2004, I started my own company focused on developing retail and office space. When the recession hit, I realized that financing or building anything with sticks and bricks wouldn’t happen for the foreseeable future. I had to choose whether to live on what I had earned or make a change and take advantage of the capital that I had accumulated.

What was your epiphany? One morning in late 2008, after I’d been crying in my Wheaties, I opened up my Internet browser and saw images of shipping containers that had been modified for nonstandard uses, such as a coffee shop and even a house. I was intrigued by the possibilities and started talking with contractors and architects. I ultimately decided to build a hospitality suite that would take the place of the traditional 20-by-25-foot tent.

How did you get started? A friend gave me a shipping container, and a contractor friend helped me figure out how to transform it. A container is an engineering marvel, and it requires a lot to take it apart and maintain its structural integrity. In five weeks, we produced a prototype. Then we had to market to a clientele that didn’t know they needed us. It was tough, but I wasn’t afraid to say, Let’s keep going. In October 2009, we made our big debut with a hospitality suite in the infield at the Charlotte Motor Speedway.

How has the company grown? We employ about 40 people, including designers, architects and engineers, to design and fabricate custom venues [www.boxmanstudios.com]. We’ve created trade-show exhibits, pop-up retail shops, tailgating venues and even a warming house for an ice rink. Our clients have included Adidas, Fiat, Ford, GE, Google, Nike and Porsche.

Is it easy to get containers? Decommissioned containers are readily available. We get them through ports and third-party brokers. They’re a small fraction of our costs.

How did you finance your start-up? I had built up a substantial net worth. I didn’t take a salary for about three years. There were tight times, but with the great blessing and support of my wife, we made it through.

How’s business? We turned a profit in 2010 and have grown by reinvesting profits into the business. In 2014, we nearly doubled our booked revenue, and we anticipate doubling our sales in 2015.

Your biggest challenge? Personnel. When a company grows as quickly as we have, sometimes you leap beyond what your people are able or willing to do, or they slow down the process because it’s uncomfortable for them. My biggest regret is that I couldn’t lead and coach people and, ultimately, I had to let some of them go.

Your greatest satisfaction? I love being on the front end of things. I have the opportunity to talk with some pretty amazing people. I get to draw ideas from them, bounce my ideas off them and bring those ideas to fruition.