Discover transformative new businesses taking shape during the Hult Prize competition for students across the globe. 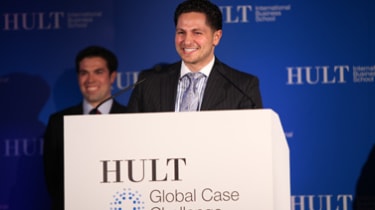 Ahmad Ashkar is the founder and CEO of the Hult Prize, a start-up accelerator for social good recognized in 2012 by President Bill Clinton and Time Magazine as one of the top five ideas changing the world. Each year, the Hult Prize takes on one of the planet’s toughest challenges, such as water, education and food crises. College students from around the world present new business ideas in regional rounds of competition hosted by Hult International Business School and its campuses in Boston, San Francisco, London, Dubai and Shanghai. Regional winners were announced in May and will attend the Hult Accelerator, an incubator for start-ups, in July. They will present their final pitches at the Clinton Global Initiative’s annual meeting in New York in September, and the winner will receive a $1 million prize donated by Swedish billionaire Bertil Hult. Kiplinger’s spoke with Ashkar about the competition. Here are excerpts from the conversation:

What makes a winning business idea?

A good idea should be market-based. A good entrepreneur finds a gap in the market and fills it with a start-up. The second thing is a good internal sponsor. For example, if you want to launch an education company, have someone in the space -- a partner, a sponsor or a stakeholder. The third thing is financing. It’s not only the ability to raise money but the ability to leverage financing.

M.Paani, founded by entrepreneur Akanksha Hazari, won the Hult Prize in 2011. What she did was capture a trend, which is that more people in India’s urban slums have mobile phones than access to a toilet or clean water. The question was how to use the desire of telecommunication companies to target this market and to create subsidies to fund clean water. m.Paani set up a rebate program. Every time the villagers use a specific mobile carrier, the carrier pays a commission to m.Paani, which uses part of the money to fund water development projects. It’s a win-win --- the incentive for villagers to use one carrier is high, and the cost of rebates for the carrier is cheaper than doing marketing and advertising.

Interconnectivity of the poor and the rich has gone seamless. There is a huge opportunity for Western retailers to access the poor. Two or three dollars a day makes billions.

What new business models are emerging?

Shared economy is the way forward. Accumulating assets is no longer a priority. The new marketplace cares about experience and impact.

C-to-C [consumer-to-consumer] is a major trend. Airbnb, a peer-to-peer [lodging] booking company, is a good example, allowing people to rent out [their properties] the days that they are out and eliminating the middleman. DoBundle is another example. The Montreal-based company eliminates retailers for clothing. Customers who love shopping and putting packages together create bundles from different manufacturers and offer them to consumers. My friend Jessica Scorpio launched Getaround (a peer-to-peer car-sharing company) a few years ago, which is basically the Zipcar killer. You can rent out your car without a corporation.(Editor's Note: Read our story on Getaround)

My favorite is the freemium model. It’s the model of today. We live in an age when people want to try before they buy. LinkedIn is a good example of the freemium model. You can join it for free, but if you want more features, such as advanced search, you pay. The freemium model creates an opportunity for people to join a network, and the network is critical. Once you have a network, you can capitalize on it and monetize it.

What good ideas are you seeing in this year’s Hult challenge?

What we’ve learned from the social business is the idea of micro-franchising. Future corporations of the West, in order to tap into the BOP [balance of payments], will need to deploy micro-franchising models. I can give you a hypothetical situation, which we hope can come true. This year’s challenge is the global food crisis. Imagine McDonald’s enters the slum. They bring healthy, nutritious, affordable food and employ pushcart vendors, which are the way most people in urban slums eat. Imagine that these pushcarts are branded McDonald’s. Most corporations neglected the move in the developing world from poor to middle class, which is happening faster than ever. So micro-franchising is an opportunity for Western countries to access the evolving market.

One Laptop per Child (a project providing low-cost laptops to more than two million children in Latin America, Africa and the rest of the world) sold the little green laptops for $194. They marketed it as the first $100 laptop for education. They went to Microsoft earlier on and asked them to help with the operating system. Microsoft was suspicious about whether they could afford it. They went with the Linux-based operating system instead. Microsoft learned the hard way that as those computers are deployed around the world, the students prefer Linux-based computers when they move from poor to sub-middle class and then middle class.

So the company of the future is one that understands how to go global and not to miss this market.