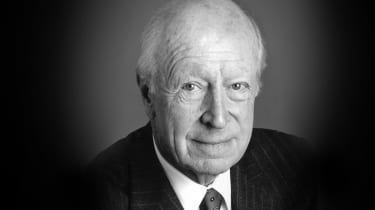 Note: The long and rich life of Austin Kiplinger -- journalist, publisher and civic leader, beloved by family and countless friends -- will be celebrated with music and remarks on Friday, December 11, at 1 P.M., in the Kennedy Center Concert Hall in Washington, D.C. All are welcome.

Austin H. Kiplinger, a journalist and financial publisher who was a leader in the civic and cultural life of the nation’s capital for more than seven decades, died November 20 at Montgomery Hospice’s Casey House in Rockville, Md., after a brief illness under home hospice care. He was 97.

The cause of death was cancer in his brain, probably metastasized melanoma, according to his son, Knight Kiplinger.

Kiplinger’s journalism career spanned more than a half-century, with work on newspapers from 1936 through 1941, local and network radio and television in the 1950s, and newsletters, books and magazines in the 1960s through ‘80s.

He was the longtime president of The Kiplinger Foundation, a charitable trust established and funded by his father which has made grants totaling many millions of dollars to nonprofits in education, the performing arts, history and mid-career journalism training.

Kiplinger was an 80-year resident of Montgomery County, Md., a suburb of Washington. While in his twenties in 1947 and 1948, he served as communications director for the Montgomery County charter campaign, which established the county’s self-rule under an elected council and executive. A lifelong supporter of civil rights, he worked on committees to end discrimination in the county’s housing market in the early 1960s, marching with the county’s fair-housing delegation in the 1963 March on Washington on the National Mall. In recent decades he championed the county’s Agricultural Reserve, a landmark program for farmland preservation.

Among his notable civic achievements in Washington was spearheading, with co-chair and former D.C. mayor Walter Washington, the 2000 capital campaign that restored the District of Columbia’s historic Carnegie Library on Mount Vernon Square to be the new home of the Historical Society of Washington.

In 2012 Austin and his son Knight donated to the Historical Society and several other Washington museums the 5,000-piece Kiplinger Washington Collection, a corporate collection started by W. M. Kiplinger in the 1920s that grew to be the largest assemblage of historical prints, maps, photos and paintings of Washington, D.C. in private hands.

Kiplinger’s relationship with the National Symphony Orchestra spanned its entire existence -- from his attending at 13 the first children’s concert of the NSO’s inaugural 1931 season (in a D.C. high school auditorium) to his service as a trustee, board president and, finally, emeritus trustee until his death.

In 1977 Kiplinger teamed with National Symphony president David Lloyd Kreeger to recruit the renowned Russian cellist Mstislav Rostropovich to become conductor of the NSO. The following year, when Rostropovich joined his striking musicians on a picket line -- illegally set up on federal property (in front of the Kennedy Center) -- NSO president Kiplinger helped convince the U.S. Park Police -- through a call he and Kennedy Center director Martin Feinstein made to the police’s boss, Interior Secretary Cecil Andrus -- not to arrest the celebrated conductor and his fellow picketers.

This averted what would have been an international embarrassment to the U.S.—the arrest on American soil of a famous human rights activist at a time when the Carter administration was criticizing the Soviet Union for violating the free speech of its dissidents. Kiplinger defused the tension by luring his friend Rostropovich off the picket line and inviting him to spend the weekend at the Kiplinger farm in Seneca, Md.

Kiplinger was a trustee of Cornell University for more than 50 years, as well as a trustee of its Lab of Ornithology. As university board chair from 1985-’89, he helped it navigate an era of growth, increased racial diversity, and campus turmoil, including student and faculty demands for divestiture of the university’s endowment assets in American companies doing business in segregated South Africa. Kiplinger resisted those demands, believing that American companies -- the most progressive employers in that country -- were a positive force for change there.

In 1972 he conceived the idea for the Kiplinger Program in Public Affairs Journalism at Ohio State University, founded in memory of his father, who was among the first two journalism graduates of Ohio State in 1912.

Born in Washington, D.C. on September 19, 1918, Austin Huntington Kiplinger was reared in D.C. and Arlington, Va., graduating from Western High School in Georgetown in 1935. He graduated Phi Beta Kappa from Cornell in 1939 as a government major, and he did a year of graduate study in economics at Harvard.

His professional reporting was first published when he was 18 and the Cornell campus stringer for the daily Ithaca (NY) Journal. Several of his stories about the 1936 presidential campaign were picked up by the Associated Press. Kiplinger became a general-assignment reporter on the San Francisco Chronicle in 1940.

Following the Japanese attack on Pearl Harbor, he enlisted in Navy aviation. He piloted TBF torpedo bombers off carriers in the South Pacific on many bombing runs against Japanese air fields, surviving anti-aircraft damage to his plane and earning the Air Medal.

Back to journalism…and broadcast news

After the war, he worked with his father to launch Kiplinger Magazine (today’s Kiplinger’s Personal Finance), which in 1947 was the first publication devoted to personal financial advice for American families.

Kiplinger moved to Chicago in 1948, becoming the front-page daily business columnist of the Chicago Journal of Commerce. While still at the Journal in 1950, when he was 32 years old, he began hosting a 15-minute evening news program on WGN-TV, possibly the first TV program in America to emphasize business and economic news.

The following year he left the Journal of Commerce and, while continuing the 6 p.m. business news show on WGN-TV, began anchoring the 10 p.m. national news program of the ABC radio network. Soon he was tapped by ABC News to be the evening news anchor for its Chicago television affiliate, WBKB-TV.

When both political parties held their national presidential conventions in Chicago in 1952, Kiplinger covered them as part of a small but aggressive ABC News team that included future broadcast stars Martin Agronsky and Pauline Frederick.

During his time with ABC in Chicago, Kiplinger co-developed (in partnership with the Chicago Daily News) and anchored an innovative TV show called Impact, which presented dramatic, “reality” feature stories, shot live on location around the city. It is considered today to have been a forerunner of the television “news magazine” format made popular by CBS’s 60 Minutes a decade later.

In 1955 Kiplinger moved to the NBC-TV affiliate in Chicago, WMAQ, anchoring its evening news and covering the 1956 Democratic Party convention in Chicago. A 1955 profile of him in Newsweek magazine was titled “The Cool Young Voice.”

But that fall, after turning down a feeler from NBC to join its network news team in New York, Kiplinger returned to Washington, rejoining the Kiplinger publishing organization he had left eight years before. In 1961 he succeeded his father as editor in chief of The Kiplinger Letters and the company’s personal-finance magazine, then called Changing Times.

He became editor in chief and board chair of the parent publishing company, Kiplinger Washington Editors, Inc., when his father died in 1967, serving until his gradual retirement in the 1990s, when he was succeeded by his son Knight. Under his leadership the Kiplinger organization maintained the progressive employee relations established by its founder, including broad profit sharing, employee stock ownership, and free vacations at the company’s resort in Stuart, Fla.

In the 1960s he wrote and narrated a multi-part series of radio commentaries for the Voice of America, explaining distinctive aspects of the American economy, such as home mortgages, consumer credit and stock investing. They were translated into many languages for broadcast throughout the world.