The March on Washington: A Personal Reflection

Editor-in-chief Knight Kiplinger looks back to a moment on the mall 50 years ago — and explores how far we've come in realizing the goals outlined that day.

People don’t always know, at the time, that they are participating in a historic event. My brother and I, teenagers in the summer of 1963, certainly didn’t, as we strode toward the Mall with thousands of fellow Americans on a hot August morning.

We didn’t know we were part of the largest public gathering ever held in Washington up to that time.

And we didn’t know that this mass of 200,000-some people would play a key role in the passage a year later of the most important civil rights protections since the end of the Civil War: the right of racial minorities to patronize any public accommodation in the nation, be it a restaurant, hotel, rental housing, theater, park, restroom, amusement park or any other place open to the general public.

A Family at the March

A few days before, our father — journalist and publisher Austin Kiplinger, then 44 years old and today a robust 94 — told us he would be participating in a demonstration for civil rights taking place in downtown D.C. (The Kiplinger family had long been supportive — as private citizens, employers and journalists — of equal rights for all.)

Dad said he would be marching with members of an anti-poverty group in Montgomery County, Md., our home suburb, and with a committee urging adoption of local and national fair-housing laws that would guarantee that people of any race could rent and buy homes in any neighborhood or apartment building. Montgomery County, like many other places in both the northern and southern states at the time, tolerated a range of discriminatory practices in public facilities.

My brother, Todd, who was then 17, and I, a 15-year-old rising high school junior, had already heard about the march on the evening TV news shows, and we wanted to come along.

The organizers of the rally had made public assurances that their thousands of supporters, both black and white, would be coming in respectful support of a proposed open-accommodations law that was stalled in Congress. 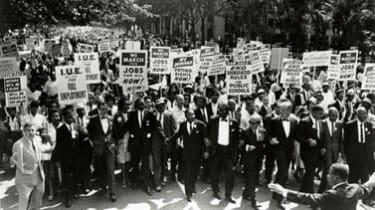 Many in Washington were skeptical, fearing the worst. Some stores and offices were closed for the day, local people were urged to stay home, and the police were on high alert. But in our family, who lived in a rural area 20 miles from D.C. but who always felt comfortable in the city, there was no discussion of whether this mass rally would be peaceful and safe, just an assumption that it would be.

My father drove us into the city early on the morning of the rally and parked at the Kiplinger publishing offices, just a few blocks north of the Mall. He set off on foot to meet his fellow fair-housing marchers at the appointed place, Todd and I began walking toward the Lincoln Memorial, and we all agreed to meet back at the office in the afternoon.

Our first impressions of this event: It was huge (far bigger than we had expected), it was diverse, and it was a veritable love-fest.

Chartered buses from all over America, organized by civil rights groups, labor unions, churches, colleges and others, had apparently brought tens of thousands of people to the national capital.

Not only were these people — black and white, young and old — gathering peacefully, but the rally overflowed with a spirit of courtesy, brotherhood and confident hope for a better future. By the time we got to the Mall, both sides of the Reflecting Pool — the shallow, rectangular lake running from the Lincoln Memorial to the Washington Monument — was packed with people.

The early arrivals had staked their claims with blankets and folding chairs, spreading out their picnic lunches. Later arrivals like us were standing shoulder to shoulder, milling around and carefully threading their way between the picnics to get as close as possible to the east steps of the Memorial, where the speeches would take place.

We didn’t get far, bogging down a long way from the edge of the Reflecting Pool and even farther from the Lincoln Memorial.

So Todd and I, like many thousands that day, didn’t hear the eloquent orations that have resonated in the half-century since then. It was only that evening, watching the news on TV back at home, that we first heard the Rev. Martin Luther King Jr. describe his passionate dream for a different American future. The words I heard on the broadcast that evening tingled in my spine, and, 50 years later, they still do. 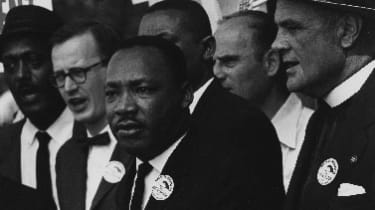 But that afternoon, Todd and I had simply wandered among the crowd, chatting with other marchers, reading their homemade and professionally crafted signs, and taking note of interesting details.

We passed by one extremely tall man whom we — and everyone else, it seemed — recognized as Wilt “The Stilt” Chamberlain, star center of the NBA’s San Francisco Warriors. He was greeting well-wishers amiably, just another guy in the crowd.

We were struck by how well dressed everyone was, especially the African-Americans (whom every respectful person in that era, black and white, referred to as Negroes). Despite the sultry weather, most marchers were in suits, skirts and dresses, and many of the Negro women were in “Sunday go to meeting” attire, with high heels and nice hats.

After Tragedy, a Bill Triumphs

In the afterglow of the march, even after that inspirational day, it was still clear that passage of the civil rights legislation was a long shot. President John F. Kennedy, while championing the bill, could not persuade enough southern Democrats and midwestern Republicans to back it.

Everything changed three months later, with the assassination of Kennedy in Dallas. The new president, Lyndon B. Johnson, had enough clout among his old colleagues on the Hill to corral the needed votes, in part as a tribute to his slain predecessor. The landmark Civil Rights Act of 1964 became law in July, less than a year after the March on Washington.

One might have thought that it would usher in a new era of racial harmony in America, but it didn’t. States pushed back against its provisions and dragged their heels on enforcement. The focus of young black activists shifted from legal rights to economic issues in inner-city slums. Their rhetoric and tactics became confrontational, anti-white and violent. On top of this, the nation was becoming bitterly divided over the war in Vietnam.

A Time of Chaos — and New Hope

Over the next three years, deadly riots broke out in black neighborhoods of Los Angeles, northern New Jersey and Detroit. The nation was shaken by the assassination of the Rev. King in the spring of ’68 — followed by severe rioting in many cities, including Washington — and the murder of Sen. Robert F. Kennedy in June.

During this chaotic time in America, my brother and I were students at Cornell, and we experienced this racial turmoil on our own campus. As a young idealist, committed to values of free speech, civil discourse and compromise — values being trampled by both the political left and right — I felt a deep despair about the course of my country.

How far we had fallen from the hopeful spirit of brotherhood I had felt that day on the Mall, just five years before.

It would take America many years to recover that spirit, and, arguably, it still hasn’t yet, despite remarkable and admirable economic and political achievements by racial minorities. The never-ending journey continues.