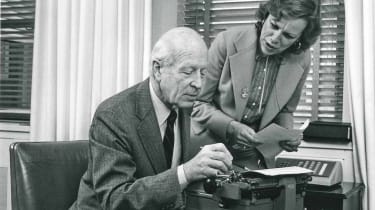 The company that publishes Kiplinger's Personal Finance magazine is an oddity in the modern media world—a small, closely held firm still run by the family that founded it in 1920. The man who ran it for more than a third of those 95 years, from the early 1960s into the 1990s, died on November 20, 2015. I’d like to tell you about him.

Like his father—-our founder, W.M. Kiplinger—-Austin Kiplinger was a journalist who became, of necessity, a businessman. He had to deal with all the normal office concerns: finance, personnel, health care, pension administration and postal rates.

He did it well, but his heart was in our editorial mission—providing useful information and dispassionate judgment to our readers. He wrote, edited and suggested stories. It’s what we Kiplingers have always done.

Austin had been a student journalist in high school and college. His first professional stories appeared in the Ithaca (N.Y.) Journal in 1936, when he was a sophomore at Cornell. He reported for the San Francisco Chronicle before World War II, and after serving as a Navy carrier pilot in the South Pacific, he helped his father start this magazine in 1946–47.

In Chicago in the early 1950s, he was a rising star of television news (on ABC and NBC affiliates and the networks). Then he returned to Kiplinger in 1956, never to leave.

He continued the rare corporate culture his father established in the 1920s—-providing highly personal subscriber service, treating employees with respect and allocating more of the company’s annual profits to them than to shareholders. This spirit lives on. It’s the right thing to do, and it also makes good business sense.

Austin was a quirky combination of the traditional and the modern. In the 1950s he helped Kiplinger become one of the first publishers in the U.S. to put its subscriber files on IBM mainframe computers. In the 1980s, he supported my initiative to automate our editorial processes—writing, editing and producing our publications on video display terminals. But he refused to learn word processing himself, continuing to bang away (with impressive speed and accuracy) on a manual typewriter.

In the 1990s, he sensed how transformative the Internet would become for our profession and our company, but he never learned to use it himself. He would ask others to “Google this for me.” His secretary printed out the e-mails he received, then he typed or dictated his responses and she re­keyed them back to the sender. His sole concession to personal tech was a flip phone he often forgot to keep charged.Sartorially correct, he wore a suit to the office almost every day. His version of “casual Friday” was a blue blazer, gray flannel slacks and, of course, a necktie.

Though fully retired, he came to the office regularly until a month before his death at age 97. There he worked on his many civic commitments, and he cheerfully schmoozed with staffers, young and old, about politics, business and world crises.

This kept him feeling young, and it gave his colleagues (especially me, his son) the benefit of his calm wisdom and well-informed optimism. All of us—he and we—were very fortunate.