China: Reforms or No Reforms?

China's new leaders have hinted that they'll adopt badly needed market-oriented economic reforms, but will they follow through? 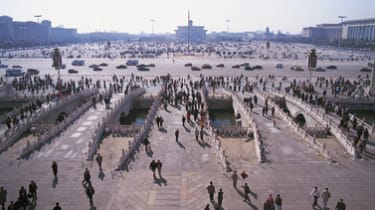 The fundamental decision facing China's new leadership: Will the country embark on another round of market-oriented economic reforms, or adopt more-nationalistic policies to tamp down growing domestic political unrest?

Initial signs are promising. Incoming President Xi Jinping and Premier Li Keqiang have signaled that they want to revamp China's economy, making it more reliant on domestic demand and less dependent on exports and on powerful state-owned and -subsidized monopolies. All are steps the U.S. has been urging Beijing to take.

China's leaders have hinted that they plan to spur more migration of rural Chinese to the big cities -- where the jobs and the opportunities are -- through land reform and higher payments to farmers who sell their land for development. And they've suggested that they'll cut tariffs on some imports -- robots, lithium batteries and raw materials, among them.

But the signals so far have been mostly symbolic: a much-ballyhooed tour to southern China, where China's first economic reforms began in 1992, and a few speeches hinting at more to come. China watchers say they won't know for sure which way the wind is blowing until the meeting of the National People's Congress, China's parliament, in March.

If the new team goes ahead with reforms, it will smooth U.S.-China economic relations, which have become strained recently as both countries cope with sluggish economies and political tensions at home.

China has weathered its recent slowdown and seems to be poised for a modest economic pickup. Its economy is growing at a 7.5% annual rate. Though down sharply from the 10% to 12% pace it has enjoyed for most of the past 10 years, that's still comfortable by most standards. While forecasters expect only a modest pickup in 2013, China's leaders say they're content to live with that as they push toward a more market-oriented economy.

"It's not a strong recovery, but it's not the end of the world," Nick Lardy, a China expert at the nonpartisan Peterson Institute for International Economics, says of China's fledgling pickup. "For the long run, it's a much more sustainable aim" than the 10% to 12% growth rate that China had been recording in recent years, he says. Moreover, the country's new leaders seem well aware that China can no longer depend on export sales to the U.S. and Europe -- the mainstay of its economic growth for the past decade -- to spur its economy, and that they need to spur more domestic demand.

But there's still a good bit of uncertainty about how far Xi and Li will go in carrying out any new reforms. The two men, for example, haven't yet agreed to cut public spending sufficiently to enable the private sector to grow. And as Li has conceded, the reform effort is likely to meet strong opposition from "entrenched interests" -- such as China's huge state-owned monopolies, whose leaders are powerful and influential -- and from provincial and local leaders who currently control the nation's farm sector.

If China does make the transition to a more market-oriented economy, it will hold indirect benefits for the U.S. -- along with possible increased sales opportunities down the road as Chinese consumers become more prosperous. China has already begun stepping up its investment in American companies inside the U.S. But don't expect an immediate boom for U.S. exporters. U.S. factories no longer make the kinds of consumer goods that ordinary Chinese would buy. And the U.S. already sells a lot of coal, aircraft, capital goods and earthmoving equipment to China's industries.

In contrast, if Xi and Li turn more nationalistic, it will almost certainly heighten U.S.-China frictions. The string of trade complaints the U.S. has filed against China would continue to grow. U.S. businesses have long complained about China's stiff regulations and constraints on foreign firms, its subsidies to exporters and state-owned monopolies, and its restrictions on capital flows. All these objectionable policies would continue -- or worsen -- under this scenario.

In either case, China will maintain some barriers to U.S. trade and investment. And it will remain cautious in letting its currency appreciate -- a move that U.S. officials have been demanding but that would not necessarily be in China's own interest.