Bumpy Road Ahead in 2016 Presidential Race

Trump will get a bounce after the Republican convention, but Clinton is poised to regain ground. 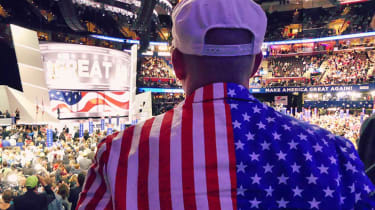 Don’t be surprised if Hillary Clinton trails Donald Trump by a couple of points when the Democratic National Convention starts Monday in Philadelphia. But she’s likely to regain that ground quickly and begin the post-conventions phase of the presidential campaign with a small lead, leaving the race about where it was before Republicans convened in Cleveland.

Back to back conventions, absent the usual week off between them, leave little time for the out-of-power party to build on the bounce in poll numbers a candidate usually gets from what is essentially a four-night prime time commercial. One good example of this: 2012. President Obama held a four-point advantage over Mitt Romney as Romney prepared to claim the nomination at the GOP convention. By the end of that week, Romney had pulled even. But by the time the Democratic coronation ended, Obama was right back where he started, with a four-point lead.

Clinton will start chipping away at Trump’s bounce this weekend, riding a wave of headlines and publicity from her selection of a running mate. The Democratic convention is likely to be much more upbeat than Trump’s was, with speakers pointing to Obama’s successes – an economy that is growing (albeit slowly), a job-creation picture that is brightening — and Clinton’s experience as a first lady, senator and secretary of state.

Trump put all of his eggs in one basket with his acceptance speech Thursday night, pitching to angry and scared Americans who already make up much of his base instead of trying to broaden his appeal to immigrants, women and other voter groups that have spurned him so far.

Not since 1968 has a Republican nominee’s speech been so devoid of optimism. That year, in the wake of riots and the assassinations of civil rights leader Martin Luther King Jr. and Democratic presidential candidate Robert Kennedy, Richard Nixon’s singular focus on law and order, couched in a pitch to the “silent majority,” led him to victory.

By contrast, Ronald Reagan talked about “morning in America,” George H.W. Bush had his “thousand points of light” and George W. Bush played up “compassionate conservatism.” Each of those approaches left room for independents and uncertain members of the opposing party to come on board and be part of a winning election-day consensus. So far, Trump seems to have left no such room.

There is still time, of course, but Trump already has a couple of strikes against him. First, he’ll never have the unfettered access to many millions of voters that he had Thursday night.

Second, the America of 2016 is much more diverse than the America of 1968. The pool of angry white votes is proportionately smaller than it was in Nixon’s day.

Polls suggest there are still some angry, scared voters that aren’t on Trump’s bandwagon. He’ll need to find a way to engage them.

It’s not an impossible task for Trump to win the White House. But he has chosen a very narrow path to try to get there.