States will need to shave billions in spending to stay above water.

The budget picture in the states is worse than bleak. Even as the national economy shows some signs of improvement, states will continue to wrestle for several years with large and looming budget strains that will force them into strict austerity.

State budget holes are getting deeper. Revenues fell dramatically all last year -- down 11.1% in the sharpest decline in 46 years. Corporate income taxes slid the most, 17.5%, but individual income and sales tax revenue was also down, by 11.3% and 8.8%, respectively.

Making it worse are publicly-supported health benefit cost hikes, unemployment payouts and larger social welfare rolls due to the recession and its lingering effect.

The result: A combined shortfall of $170 billion for the fiscal year that will end in five months. Worst off: California, Michigan, Ohio, Florida, New Jersey, Arizona and Illinois. Only four states -- North Dakota, South Dakota, Wyoming and Montana (all of them low population and rich in natural resources) -- are on track for balanced budgets in fiscal 2010. Alaska, too, is better off than most, but it faces some budget shortfalls because of the drop in the price of oil. 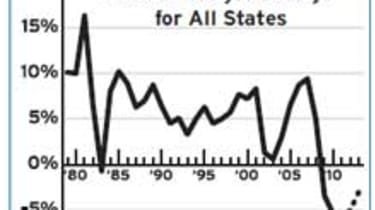 Next year will be even tougher for most. The states will need to cut a total of about $180 billion, some 15%-20%, from this year’s levels. That’s due to skimpy revenue flows continuing in personal income, the exhaustion of one-time budget fixes and the end of large federal economic stimulus funding still in the pipeline. Also looming on the horizon are immense and mounting costs related to public-worker pensions and health care.

The deficit-saddled Congress can’t afford a real rescue, but federal aid doled out in a jobs bill will help some. With many state rainy-day funds depleted, deep spending cuts are unavoidable. That will mean smaller state governments, with fewer services, for years.

Governors, lawmakers and mayors are scrounging for any and all savings. Obvious cuts, including state worker layoffs and furloughs and postponing infrastructure projects, have helped a bit, but most states are being forced to dig deeper and find more innovative approaches.

All states are trimming services. Nevada has closed its consumer affairs office for at least six months. Washington will end funding for 75 state commissions and boards. Michigan is consolidating public service and other departments to save $2 billion in overhead and administration. Massachusetts has the same idea. It may combine about two dozen transportation agencies into one, with projected savings of $7 billion over a decade. Alabama is likely to adopt a 3%-4% across-the-board agency spending cut.

Many states are contracting out key functions to save. Colorado will privatize all of its minimum security prisons. South Carolina may farm out administrative management of its entire motor vehicle department.

Some cuts will hurt businesses. Iowa, Missouri and Arkansas will scale back aid for rural businesses, meaning fewer business-expansion tax incentives and less marketing aid. Iowa will also put a hold on tax incentives for biotechnology firms. Farmers in Montana, New York, North Dakota and Vermont will get less help.

California and New York will borrow billions. That’s a risky step, but it’s one they will be forced to do as state legislatures are gridlocked for the time being over serious annual budget restructuring.

One thing states are still very reluctant to do: Raise taxes to fix shortfalls. But that may change. A referendum vote in Oregon to confirm a boost in taxes on some businesses and on individuals making over $125,000 a year (and couples making more than $250,000) may be a sign the public won’t accept more cuts in education and other services.

In the past year, eight states have raised taxes on wealthier families, a move also favored by President Obama on a national scale. Republicans object to hikes on the rich, calling it a new form of class warfare. And most economists believe that tax hikes in a struggling economy are counterproductive. Still, the Oregon vote and similar moves by other states suggest that legislators are getting desperate. They’re required to balance budgets but often can’t without more revenue, even as they scour their budgets for savings on the spending side.