The stage is set for the 90th Academy Awards Sunday, March 4. 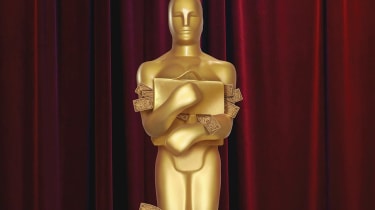 The stage is set for the 90th Academy Awards Sunday, March 4. So let’s roll out the red carpet for some past Oscar winners and contenders that can teach you about money.

Here are nine movies that tell tales of personal finance, enterprise, career advancement, real estate—and scams. Each one has a financial lesson of a sort.

In 1971, Washington Post owner Katharine Graham had two very important decisions to make. The first: Whether to give her paper’s executive editor, Ben Bradlee, the go-ahead to publish classified government documents known as the Pentagon Papers. The second: whether to take her company public. The former decision, we learn in The Post, could have dire consequences on the latter.

Meryl Streep portrays Graham as an unconfident heiress who, despite lacking the business acumen of her deceased husband, eventually decides on the IPO. Three days after it lists, Bradlee, played by Tom Hanks, informs her he’s obtained copies of the Pentagon Papers. Graham’s gut tells her to publish them, but her lawyers disagree, informing her that if the decision backfires and the government retaliates, it could void the stock sale and jeopardize the company.

The story begins with a chance encounter between a man (played by Nanjiani himself), and a woman, played by Zoe Kazan and based on Gordan. The pair briefly dates, only to break-up due to irreconcilable differences. Soon after, the plot swings into full gear when doctors discover a serious lung infection in Kazan’s otherwise-healthy character. The malady strikes her unexpectedly, progresses rapidly, and requires a long, costly hospital stay. At her side through it all is Nanjiani. The endeavor illustrates the fragility of the human body and the importance of preparing for the unpredictable (and the unexpected financial costs that might come with it.)

The narrative plays out in three separate but concurrent storylines, each following different protagonists as they identify the same outcome. Bale’s character, an eccentric hedge-fund manager, is the first to anticipate—and wager on—the looming catastrophe. Carrell plays the head of a different hedge fund who similarly bets against the economy. But he has some misgivings, and as he and his fund’s employees decide to investigate, they eventually discover the rot that lies at the heart of the mortgage security market. When the system ultimately does collapse, the film’s protagonists are rewarded for their foresight, even as millions lose their jobs, homes, and retirement savings.

The Wolf of Wall Street (Nominated for Best Picture, 2014)

The Wolf of Wall Street is based on the memoirs of Jordan Belfort, whose rise and fall is an archetypal tale of Wall Street greed. Leonardo DiCaprio plays Belfort as a silver-tongued salesman who isn’t afraid to bend the truth to close a deal. He expects the same from his subordinates at his firm, Stratton Oakmont.

It grows rapidly, fueled by huge profits reaped from the company’s reliance on “pump and dump” scams (a form of securities fraud in which salesmen use deceptive tactics to sell investments at inflated prices, then sell their own positions). Wolf turns the money into a worldwide drug spree that eventually comes to an end with a jail term. His investors get next to nothing (though the film spends little time on them).

In 2002, the Oakland Athletics’ front office revolutionized Major League Baseball by assembling a winning roster of overlooked (and thus cheap) but statistically efficient players. The following year, author Michael Lewis introduced the world to the architect of that baseball revolution, Billy Beane, in his book Moneyball: The Art of Winning.

Played by Brad Pitt in Moneyball, the 2011 movie, Beane finds a way to overcome his team's limited budget and compete with the league’s deep-pocketed franchises like the New York Yankees. With help from a Yale-educated math genius (played by Jonah Hill), he sets aside picks from the team's traditional scouts (who rely on intuition and favor players who look the part of a professional athlete) and instead follows a rigorous, statistics-driven method to identify talented players who score well on his metrics. His team of "bargains" goes on to considerable success.

This Aaron Sorkin-penned dramatization of Facebook’s early days follows company co-founder and CEO Mark Zuckerberg as he strives to revolutionize the way people communicate online. The young programmer is dogged from the outset by allegations of intellectual property theft from two of his former Harvard classmates—the Winklevoss twins. Despite these accusations, Facebook experiences rapid growth, much to the twins’ chagrin. Incensed, they take Zuckerberg to court, filing a lawsuit in which they claim he stole their idea for a social networking site after they’d sought his help launching one of their own.

The Social Network didn’t take home any of the major awards, but it did win in three less-splashy categories: “Best Adapted Screenplay,” “Best Original Score” and “Best Film Editing.” Had there been a prize for “Best Financial Lesson,” it likely would’ve won a fourth: Through its depiction of the Winklevoss twins’ plight, the film illustrates the perils of not protecting intellectual property.

The film begins with a melancholy retrospective depicting a shy, young boy as he falls in love with and later marries the extroverted, audacious girl of his dreams. The couple moves into a quaint, downtown home and grows old together, all the while fantasizing about swapping their city existences for lives of adventure. They set aside money to live out that dream, but the wife falls ill and dies before they can embark. The lonely and cantankerous widower holds out against the real estate developers who want his land. Threatened by a court order directing him to move into a retirement home, he ties balloons to his house and floats away in pursuit of that long-forestalled adventure.

George Clooney is the eponymous, gambling-addicted protagonist of Michael Clayton, who works as a “fixer” for a New York City law firm. The job pays well, but not well enough for Michael to cover $75,000 outstanding on a restaurant investment he entered into with his drug-abusing brother. This looming debt (it's owed to a loan shark) takes a back seat to more pressing issues when one of the firm’s leading attorneys dies in an apparent suicide. Michael doesn’t buy it, and in his hunt to uncover the truth he discovers a massive corporate coverup that includes his own firm.

This main plot is fast-paced and exciting, but it doesn’t offer much in the way of pecuniary wisdom. Rather, the film’s pocketbook lesson comes from Michael’s relationship with his brother and their failed venture.

Just before World War I, Danish author Karen Blixen, played by Meryl Streep in an Oscar-winning performance, moves to British East Africa, marries, and starts a coffee farm. But her new husband, a baron, has no interest in actually running the plantation. The two grow apart and eventually separate, freeing the Dane expat to pursue another romantic interest: big-game hunter Denys Finch Hatton, played by Robert Redford.

Karen boots the baron from the farm and then invites Denys to move onto the property. He accepts, and the pair’s relationship soon blossoms, only to wilt when Karen discovers the hunter has no plans for marriage. Their doomed romance is tragic, to be sure. But the real tragedy in Out of Africa arrives when a fire destroys the farm, putting Karen in dire financial straits.

QUIZ: Does Insurance Cover That?

Service members face a range of threats – from the lethal to the financial. A wide array of generous benefits and programs are meant to offset some of…
Americans Are Stockpiling Cash

With no place to go and businesses closed, we are saving more than ever.