Surging oil and gas production, particularly from shale basins that are just starting to deliver marketable fuel, may be better for ancillary companies servicing the oil giants than for the oil and gas companies themselves.

Surging oil and gas production, particularly from shale basins that are just starting to deliver marketable fuel, may be better for ancillary companies servicing the oil giants than for the oil and gas companies themselves.

Though industry giants such as ExxonMobil, Chevron and British Petroleum must cope with the vagaries of commodity prices in a market rich in supply, a vast array of firms providing parts, pipelines and all sorts of services, including ways to get the petrochemicals out of the ground and to customers more safely and cheaply, are seeing rapid earnings growth.

“A lot of the people who got rich during the gold rush weren’t mining gold. They were selling picks and shovels,” says Sam Carr, an analyst with SNL Financial, a data and research company. “You’re seeing the same thing here.”

Share prices are as of March 12. Unless otherwise indicated, price-earnings ratios are based on estimated earnings for 2014. Projected earnings growth, provided by Thomson Reuters, represents three-to-five-year estimates.

Not surprisingly, pipeline operators, such as TransCanada (TRP), have been going gangbusters. However TransCanada’s shares have struggled over the past year because of delays in approving the company’s controversial Keystone pipeline. Juan Plessis, an analyst at Canaccord Genuity, thinks the pipeline will eventually be approved, but it may not be operational until 2016.

Meanwhile, the company has booked billions in other projects, including the $12 billion Energy East pipeline that doesn’t require a presidential go-ahead. Plessis thinks the stock should sell for $53 a share within a year.

Revenues at Schlumberger (SLB), the world’s largest energy-services company providing everything from drill bits to engineering, testing and project management, rose 8% last year, mostly due to projects in China, India, Indonesia, Qatar, Russia and French Guiana. However, Schlumberger (pronounced shlum-burr-ZHAY) also won contracts to speed the fracking process for clients in Arkansas and to do seismic monitoring in North Dakota’s Bakken shale field.

Profits are growing more briskly. Earnings soared 23% in 2013, and analysts see them expanding 18% to 20% annually over the next two years. The stock's P/E ratio is modest in light of expected profit growth. 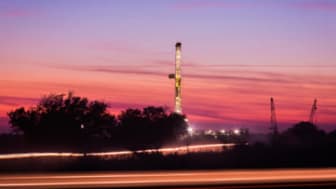 Workers are migrating to North Dakota by the tens of thousands to fill fracking jobs. That’s creating booming business for the state’s banks, many of which are experiencing double-digit-percentage growth in both deposits and loans, says Carr.

Although the banks headquartered in North Dakota tend to be tiny and privately owned, Alerus Financial Group (ALRS) is an exception. Its stock trades infrequently on the over-the-counter bulletin board. The bank, with $1.4 billion in assets, says refinancing activity dried up in the last half of 2013 due to rising interest rates.

But Alerus still managed to earn record profits of $20.3 million, or $4.42 per share, up 13.4% from 2012. The stock sells for about 1.8 times tangible book value — nearly the same as the average price-to-tangible-book-value ratio for the typical small bank. But few banks are generating double-digit-percentage earnings growth like Alerus.

The nation’s largest bank by stock-market value, Wells Fargo (WFC) has more deposits in North Dakota than any other institution, Carr says. Wells is the largest mortgage underwriter in North Dakota, with a 14% share of the market. With building permits soaring—and housing so tight that apartment rents are also soaring—the bank is well positioned to tap into the state’s economic gusher.

Wells is widely considered to be among the nation’s best-managed banks, so its shares rarely sell cheaply. They’re at a slight premium to the average price-earnings ratio for big banks, but Wells’s high quality and a dividend yield of 2.5% make the stock attractive for long-term investors.

However, in January it won a contract to participate in a $15 billion venture to build a liquefied natural gas facility in Kitimat, Canada, that will export to energy-starved Asian markets. Sterne Agee analyst Michael Dudas thinks that project alone could boost Fluor’s backlog by 10% and provides a good reason to buy the stock.

Dudas predicts that Fluor will outperform the market in 2014, largely as the result of continuing growth in the oil, gas and petrochemical markets.

Quanta (PWR) attributes more than two-thirds of its revenue to electric-power projects, but recently told analysts that expanding into oil and gas infrastructure will be key to driving growth over the next five years.

Why? Fracking in new regions is producing more oil and gas than can be efficiently moved by rail, which increases demand for pipelines. Pipeline capacity is already tight and will become “severely strained” over the next few years, say Quanta executives. That’s an opportunity for Quanta, which, among other things, builds, inspects and repairs pipelines. UBS analyst Steven Fisher says Quanta’s future is bright and its stock is a steal.

Because the rich energy finds in new regions made accessible by fracking, such as the Appalachian Basin and the Northwest, aren’t yet served by pipelines, producers have turned to railroads to bring the fuel to market. Over time, pipelines will be built and railroads will give up a good portion of this business.

But AllianceBernstein analyst David Vernon believes Union Pacific (UNP) will continue to benefit from the energy boom because the shale basins will continue to need rocks and sand for fracking, drilling chemicals and steel to build wells. The economic vitality that drilling brings is also likely to create demand for appliances, lumber for homes, and a wide array of other industrial materials that can’t be squeezed into pipelines.

“We see good growth from the energy renaissance and think you are going to see Union Pacific compounding shareholder values,” says Vernon. “As a core transportation holding, it’s a great stock.”

Moving fuel and industrial products by rail has also goosed demand for the containers to hold those products, and that’s benefiting container manufacturing companies. Greenbrier (GBX) announced in March that it had received new orders for 5,600 rail cars valued at $460 million. New railroad safety measures are likely to fuel even more growth, says CEO William Furman. Why? Recent accidents have spurred railroads and the Department of Transportation to agree to a series of safety measures, including reducing speeds in populated areas. That translates to slower turnaround times for shipping energy and means greater demand for containers to move the same number of products.

Restructuring expenses left the Lake Oswego, Ore., manufacturer in the red during the fiscal year that ended last August 31. The company is expected to be solidly in the black in the current fiscal year, and the stock has more than doubled since last July to reflect the improved outlook. The stock is not especially cheap, but put Greenbrier on your watch list, and take advantage of any price drop during market pullbacks.

* Based on estimated earnings for the four quarters through November.