Unless you have been sitting on the sidelines – or heaven forbid, invested in a bear-market fund – chances are your portfolio made good money in the past year. 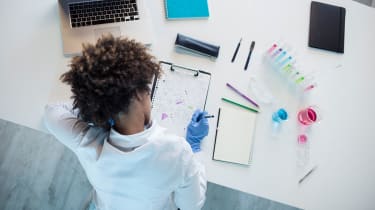 Unless you have been sitting on the sidelines – or heaven forbid, invested in a bear-market fund – chances are your portfolio made good money in the past year. But even in a profitable year there are winners, and then there are big winners. Health care stocks have been on a tear – funds that focus on the sector returned a stunning 28.32% in the past year, making it the second-best performing sector over that period (behind technology).

Why such juicy returns? Ziad Bakri, manager of T. Rowe Price Health Sciences (PRHSX), says the stocks have, in part, been breathing a sigh of relief as political fears have lifted. In 2016, health care stocks struggled as candidates from both major political parties discussed imposing new regulations on drug prices. That talk fizzled in 2017, however, as did efforts to repeal the Affordable Care Act.

Another driver, Bakri says, has been the breathtaking pace of recent innovations. He notes that 46 new therapies received approval in 2017 from the U.S. Food and Drug Administration. “More important than just the number of new drug approvals is the fact that many are truly innovative and can be transformative for patient care,” he says.

We’ve profiled the five top-performing no-load mutual funds that invest in health care stocks, as measured by one-year returns. If the health care sector can keep riding its current winning streak, these relatively high-momentum funds should continue to shine.

Data is as of Jan. 19, 2018, unless otherwise noted. Click on ticker-symbol links in each slide for current share prices and more.

The fund’s managers begin their investment process with biotech stocks that trade on U.S. exchanges. Managers then screen that list of potential holdings for liquidity and share price to come up with a final list of stocks for inclusion in the fund. Finally, the fund weights those stocks according to a “modified cap-weighting approach,” according to a company spokesman. That results in the fund’s weightings lying somewhere between a traditional capitalization-weighting approach (in which larger companies receive larger weightings) and an equal-weighting approach (in which all holdings receive the same weight in the fund).

That weighting approach results in a portfolio skewed somewhat more toward smaller companies than peers, which likely has boosted performance – though top holdings still include large companies such as AbbVie (ABBV) and Amgen (AMGN). Smaller companies generally beat large-company returns across all sectors. And in biotech, favoring small companies means reaping a bigger boost from those up-and-coming names successfully developing novel therapies.

The fund’s 1.37% expense ratio is high given its bare-bones management process. On the other hand, its 16% annualized return over the past 10 years has handily beaten some 88% of peers.

Manager Eddie Yoon has run the fund for more than a decade, relying on Fidelity’s deep bench of health care stock analysts. Yoon and team consider companies’ free cash flow, how companies are deploying capital, and firms’ likely future margins, in their process. In particular, the team seeks companies likely to benefit from secular trends, “such as the growing emerging-markets middle class and aging developed-world populations, both of which should continue to provide stable demand for the industry,” Yoon says.

Another secular trend Yoon is watching is what he describes as a shift in the U.S. to a “consumer-centric” model of healthcare. In this shift, he says, patients “will be asked to make more informed health care decisions and pay a greater percentage of their costs over time.” He believes tech firms that help to improve the health care system’s efficiency will benefit from this trend.

At Fidelity Select Health Care Services Portfolio (FSHCX, $98.05), manager Justin Segalini says he aims to identify companies with “durable competitive advantages.” Segalini scales his bets up or down depending on how undervalued he feels a stock is relative to peers. In particular, he favors stocks that he feels have been overly punished due to some type of temporary hurdle.

Unlike several of the other funds on this list, which have ridden to glory on small biotech names, this fund has been placing big bets on insurers. The fund’s top five holdings as of November were all insurance companies, and together accounted for a whopping 54.5% of assets.

Segalini is bullish on the fund’s top holding, UnitedHealth Group (UNH), which alone accounted for 25.3% of assets in November. He says the company’s competitive advantages derive not only from its scale – UnitedHealth is the largest U.S. health insurer – but also from its innovative technology offerings and its smart deployment of cash. (UnitedHealth has been widely lauded for its string of diversifying acquisitions in recent years.) The stock has returned 55.15% in the past year.

One distinguishing feature of the fund, Bakri says, is that the team places special emphasis on identifying companies developing novel therapies and drugs. “Innovative therapeutics drive much of the long-term value creation within health care,” he says.

Currently, one of Bakri’s top picks is Sage Therapeutics (SAGE), which develops biopharmaceutical treatments for central-nervous system disorders. Sage is a so-called “clinical-stage company,” meaning it doesn’t yet have any products on the market and so has no revenue or earnings. But the company has reported impressive trial results for two of the company’s depression treatments in recent months, and investors have been cheering. Over the past three months, the stock has popped 169%.

Eventide invests according to religious and socially responsible principles. So in addition to evaluating investments for their appreciation potential, manager Finny Kuruvilla looks for firms that are doing right by customers, employees and communities.

But Eventide Healthcare & Life Sciences (ETNHX, $29.97) hasn’t sacrificed performance for its principles. Over the past five years, the fund has returned 23.55% annualized, beating 99% of peer health care funds, according to Morningstar. However, because the fund focuses on smaller and riskier companies, it tends to fall harder than peers when the sector reverses course. In 2016, for example, when the average healthcare fund shed 10.60%, the Eventide fund lost 16.20%.

The company sees the development of next-generation treatments – including gene editing and immuno-oncology – as secular themes that will drive biotech gains in coming years. Biotech stocks generally deliver their biggest performance pops during their early stages, when a company may be posting initial trial results that show the promise of a nascent therapy. Kuruvilla tends to favor those early-stage companies.

ETNHX’s top holding as of September (the last time the fund provided a holdings update) was Blueprint Medicines (BPMC), a company that doesn’t yet have products on the market but is developing promising targeted cancer therapies. The fund’s next biggest holding, Bluebird Bio (BLUE), is developing gene therapies to target blood disorders and other diseases. Blueprint shares popped 137.82% in the past year, while Bluebird’s stock surged 164.79%.