A record rebound in third-quarter GDP, as well as better-than-expected jobless claims, propelled stocks on Thursday.

Whether stocks would recover Thursday was in doubt in early trading as investors struggled to embrace bright tidings from recent economic data. But the loud rebound in third-quarter GDP and better-than-expected unemployment claims eventually roused some bulls.

On the latter front, the Labor Department reported that last week's jobless filings fell from 791,000 in the week prior to 751,000, comfortably below the Bloomberg consensus estimate of 770,000.

On the former, Q3 GDP predictably made its sharpest recovery since World War II (after all, it followed Q2, which suffered the sharpest drop since then). The 33.1% sequential expansion topped the consensus forecast for 32% growth.

However, that performance comes with quite a few asterisks and other forward-looking considerations. Some expert observations about Thursday's GDP data:

Nonetheless, the Dow Jones Industrial Average clawed back a little of what it lost Wednesday, climbing 0.5% to 26,659, while the Nasdaq Composite finished with a more emphatic 1.6% gain to 11,185. 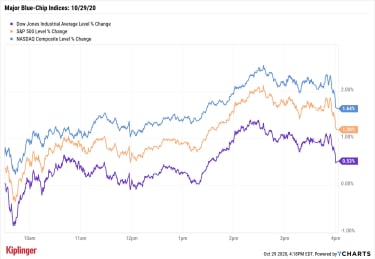 How to Steady the Boat Ahead of Election Day

Today's swing favored investors, but some might be tiring of the market's recent turbulence. A respite might be a ways off.

"The two main investor concerns over recent months have been what would happen if there is a contested election and/or a second wave of COVID-19 spread," says Canaccord Genuity equity strategist Tony Dwyer. "The markets should remain volatile and unpredictable as these two fears are upon us and playing out in real time over coming days."

Sure, some see this as a chance to make high-potential swing bets on the outcome of the presidential election – whether the winner be Donald Trump or Joe Biden – but some investors would prefer to avoid any choppiness they can.

Generally speaking, low-volatility stocks should be able to help smooth out your portfolio's performance over time. However, a few steady stocks stand out for their ability to shrug off either election outcome for short-term stability. Read on as we highlight five quality stock picks that are well-positioned to withstand any Election Day-specific market shocks.

Kyle Woodley was long AAPL and AMZN as of this writing. 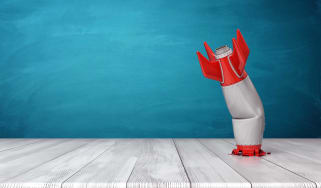