Skip to headerSkip to main contentSkip to footer
loans

The Dark Side of Student Debt

Defaulting on your loans can ruin your financial life. We show you how to repair the damage.

Imagine going to college to improve your life and walking away with $500,000 in student debt. That number is no typo. A young Seattle couple ended up so mired in debt on the way to their degrees that they "couldn't even make the initial payments," says Christina Henry, of Seattle Debt Law. After the collection agencies started calling, the couple, who have two children and earn a total of $80,000, visited Henry for help. "They took out as much as they were able to and didn't even know how much they had. It's the most egregious case I've ever seen."

Consider it a cautionary tale. Over the past decade, college students have had every reason to borrow for college and little reason not to. College costs exceeded inflation by as much as six percentage points a year, bringing the average annual price of a private-school education to $37,000. Congress raised the maximum on federal student loans and introduced the Grad PLUS loan, allowing graduate students to borrow up to the cost of attendance. And until 2008, when credit began tightening up, lenders handed out private student loans as if they were party favors.

Result? More students borrowed, and in larger amounts. The average debt at graduation was $24,000 in 2009, up 6% from the year before, according to the Project on Student Debt. But that understates the dramatically higher debt that some students racked up. And many of them got swamped by their bills almost immediately. Of the 3.4 million federal-loan borrowers who entered repayment in 2008 (as the economy slid into recession), 7% defaulted within the year, the highest percentage in more than a decade (see the explanation of late-payment penalties below). That statistic doesn't include the thousands of borrowers who fell behind on their payments without defaulting, or those who couldn't keep up with their private student loans.

Missing a few payments invites dunning calls and letters, but defaulting has the potential to destroy your future. Being on the dark side of federal student debt means the feds can demand payment in full, assign your case to a collection agency, garnish your wages, pocket any state or federal refunds, and even come after your benefits in your old age. "We see people who defaulted on loans in the 1970s and 1980s whose Social Security benefits are being garnished," says Paul Combe, of American Student Assistance, an agency that guarantees federal loans. Worse yet, old, neglected loans carry decades' worth of fees, interest and collection costs. "A $2,000 loan that defaulted 20 years ago is now $30,000," says Combe.

The federal loan program offers several plans that can get you back on track. With private loans, you have to negotiate with the lender. Either way, start by knowing what types of loans you have, where they originated and who services each one. For federal loans, go to the National Student Loan Data System. For private loans, review your loan agreements, which should include the terms of the loan and repayment options.

Help with federal loans. With the federal loans known as Staffords (now part of the Federal Direct Loan program), as well as Grad PLUS loans, the loan goes into delinquency when your payment is 21 to 30 days late. If you fall 60 days behind, the loan agency will report the lapse to the national credit bureaus. Meanwhile, late fees and interest will add up.

If none of the federal repayment programs offers a solution, apply to your lender for deferment or forbearance. Deferment lets you forgo monthly payments, usually for a year at a time, for up to three years. The feds pay the interest on subsidized Staffords but not on unsubsidized loans.

Accrued interest gets tacked on to the principal. You have a legal right to deferment if you meet certain criteria, including economic hardship or status as a half-time student or you are on active duty in the military.

Forbearance gets you off the hook on payments for up to five years, in yearlong increments. Generally, the lender decides whether you qualify. Interest accrues on all the loans, including subsidized Staffords. Forbearance makes most sense for borrowers who are experiencing a short-term financial crunch, not those whose situation is unlikely to improve. Such borrowers are better off in an income-based plan, which can reduce the payments to as low as zero and offers forgiveness after 25 years.

Defusing default. If you fail to make a payment for more than 270 days, your loan is technically in default, but most lenders wait 360 days to make the default official, giving you a window in which to redeem yourself. (If you're in that phase, call your lender immediately to discuss your options.) After the loan defaults, you lose access to forbearance and deferment, as well as to future federal student aid, and the default goes on your credit record.

Uncle Sam gives you several ways to get back in his good graces. One is to rehabilitate the loan, in which you contact your lender and arrange to make nine timely, "reasonable and affordable" payments over a ten-month period. The Department of Education sets guidelines as to what constitutes reasonable and affordable and stipulates that the lender can't require a minimum payment. In practice, however, negotiating the amount with the lender can be "a huge problem," says Deanne Loonin, of the National Consumer Law Center. If you and the lender can't come to terms, contact the Federal Student Aid Ombudsman, at 877-557-2575, and ask for help. If you rehabilitate your loan, the default disappears from your record.

The other strategy is to consolidate your loans with the Federal Direct Loan program, which lets you immediately enter one of the income-based repayment programs. (If you have already consolidated your loans in the Direct Loan program, you generally are not eligible to do so again.) "The advantage of consolidation is that it's faster. You don't have to make nine payments first," says Loonin. But the default remains on your credit record for up to seven years.

You may conclude that your debt is simply insurmountable and decide to try for bankruptcy. To succeed, you must demonstrate to the court that your payments impose "undue hardship," with no prospect of remedy, and that you made a good-faith effort to repay.

In a few circumstances, such as death or permanent disability, or if the school closed while you were enrolled, your federal loans are eligible for cancellation. For details, go to www.studentloanborrowerassistance.org.

Help with private loans. Lenders of private student loans typically consider you to be in default as soon as you blow past the payment period, and you can count on receiving collection calls shortly thereafter.

To avoid that scenario, some lenders allow you to make lower payments for a few years and catch up later. They may also grant you forbearance, for three months at a time, during which interest continues to accrue. But don't expect them to go out of their way to extend these deals, says Loonin. Check your promissory note. If you don't see an alternative plan, call the lender and try to arrange one.

Unlike the federal government, which can garnish your wages and pursue the debt indefinitely, lenders of private loans must sue to collect on a default, and they are subject to your state's statute of limitations, usually six years. Lenders can and do take borrowers to court, says Loonin. "We've seen more-aggressive collection efforts, including more lawsuits, on the private-loan side."

If they succeed, they can garnish your wages, put a lien on your house and tap into your bank account. As with federal loans, private loans are extremely difficult to discharge in bankruptcy and require that you meet the same stringent standards. But a lender might consider settling the debt when the prospects for full payment are dim, says Henry. That was the case for her Seattle clients. With no chance of repaying the entire amount, the couple settled some of their private loans, arranged an income-based repayment plan on the federal loans and hope to discharge the remaining debt in bankruptcy. 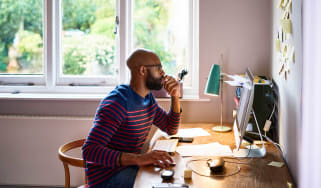 Here’s how to know if you qualify – and how you should take advantage.
Stay on Course With Student Loans 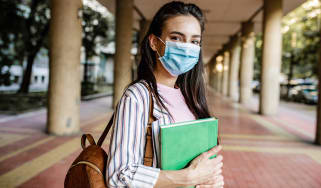 You may be eligible for deferment if you receive unemployment benefits or are unable to find a full-time job.
8 Tips and Warnings on PPP Loan Forgiveness

Not having to pay back Paycheck Protection Program loans is a huge benefit for small-business owners. But there are a lot of rules that must be follow…