3 Best Things to Buy at Lidl for the Holidays

The discount retailer from Germany rolls out the bargains on groceries and more as it grows its U.S. store footprint. 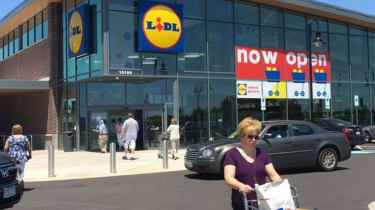 German-based deep-discount grocer Lidl is in its early, bumpy stages of introducing itself to Americans, having just started opening U.S. stores in the summer of 2017.

Like its German arch rival Aldi (already established in the U.S. and growing), Lidl not only sells groceries at ridiculously low prices, but home goods, gadgets, tools, clothing and more.

With the discounted groceries and the array of other items, Lidl, if you happen to live near one, is a destination store to stay on budget for the holidays. We checked out some of the must-buys at the small-footprint, no-frills retailer.

Lidl publishes its weekly circulars online weeks in advance, so smart shoppers can employ smart strategies to find the best discounts. In the gift department (gifting to others or gifting to yourself), Lidl has some doozies brought overseas from its European home.

Coming up: A glass electric kettle made with Schott-Duran glass. OK, to get geeky, this is high-end glass typically deployed in laboratories on lab equipment, but now, in your kitchen, for only $19.99. The even-cooler part: The glass turns blue when in use. Add an oh-so-European crepe maker to the mix for delicious Christmas morning treats. Lidl is selling one for $26.99. The least-expensive one we could find at Walmart was selling for $39.95.

You want to be prepared for the invasion of holiday guests. But where are they going to sleep? Lidl has you covered. A Meradiso (Lidl’s house brand) queen air mattress with electric pump is going for $39.99; the cheapest we could find online at Walmart.com was selling for $49.99. Oh, and you can throw in an organic cotton duvet insert starting at $64.99 and an organic cotton pillow for $12.99 to top off your new air bed.

And if you’re looking for toys last minute – as did a friend of mine once who had five kids and realized on Christmas Eve she had neglected to buy anything for one of them – Lidl has plenty of knockoffs and name brands.

Whether you’re gifting clothing or looking to strut into a holiday party sporting something snazzy (and inexpensive), you may want to check out Lidl – which is also a house of fashion. That’s thanks to German-born style icon Heidi Klum of “Project Runway” fame. Klum’s exclusive fashion clothing line, Esmara by Heidi Klum: Heidi and the City, went on sale at U.S. stores in September.

It’s part of Lidl’s efforts to enhance its non-grocery offerings. Like its groceries, prices are low for Heidi-wear, mostly in the $6.99 to $29.99 range. Leather shoes, business-wear slacks, leopard-print hoodies, blouses and more are included in the Esmara by Heidi Klum line, which is only sold at Lidl during periodic “Fashion Weeks,” when collections go on sale to Lidl shoppers.

The week before Christmas, you can stay warm with an Esmara ladies quilted jacket, sizes 4-12, for $24.99. Toss in a pair of ladies’ leather ankle boots for $19.99 and an Esmara sweater dress for $19.99, and you can go rockin’ around the Christmas tree fashionably – and inexpensively.

And here’s to the Christmas cutups: Lidl has ugly-on-purpose Christmas sweaters on sale for $9.99, so you won’t feel guilty about throwing it away after one use.

Lidl stores have been upping the ante in the alcohol department. Not only is the wine inexpensive, starting at $2.89 a bottle, but it’s also good. Adam Lapierre, a certified Master of Wine (there are only 365 people who have that title), is Lidl’s wine director. He estimates he tasted approximately 10,000 bottles of wine to settle on who would bottle Lidl’s brands.

For example, Lidl’s Allini Prosecco from Italy was recently named “Sparkling Wine of the Year” at a blind tasting run by Purdue University. Its Sinful Grin Petite Sirah from California was chosen best of class. In all, Lidl’s wines took home 104 medals from the 2017 INDY International Wine Competition. Wines are organized on store shelves in three categories by price: Everyday Collection (typically under $5); Wine Club ($5-$10); and Sommelier Selection (above $10).

Craving a Bud Light? You can find it at Lidl, right next to the...what’s this?...knockoff Bud Light? Indeed. Lidl has its own line, in packaging that looks like Bud Light, parked next to the real thing. Maybe you’re into craftier beers, like Blue Moon. Lidl has its version, dubbed Blue Key. In a nod to U.S. shoppers’ tastes, beer is sold cold, which is uncommon in Europe.

From laptops to loudspeakers to, yes, shoes. Check out the latest gee-whiz gadgets to make an impression during gift-giving season.
Bad News for Super Savers