Take a Road Trip With Your Grandkids

'Grand travel' creates memories of a lifetime for both generations. 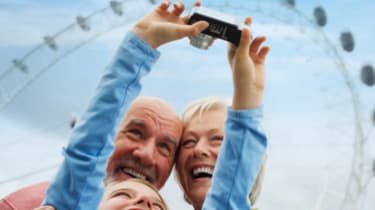 Kay and John Nelson have a family tradition that's far from ordinary. When each of their nine grandchildren turns 10, the couple, both 70 and from Huntley, Ill., take the grandkid on a special weeklong trip. "It's changed our relationships for the better," Kay says. "We don't indulge them enormously, except for this special week."

The Nelsons took one grandson to the Grand Canyon, and they have taken one granddaughter to Prince Edward Island, Canada, for a tour based on L.M. Montgomery's book Anne of Green Gables. Another granddaughter visited the Virginia historic sites in Williamsburg, Jamestown and Yorktown, and a third granddaughter experienced backstage tours, including visits to the costume and prop rooms, as part of a Broadway trip. "They learned so much—not only about the places we went, but we also learned a lot about each other," says Kay, a retired schoolteacher.

The Nelsons are among a growing number of grandparents who are discovering the joys of seeing the world through their grandkids' eyes. Multigenerational travel is an increasing segment of the travel industry, especially trips designed for grandparents and grandchildren—leaving the middle generation at home. "Grandparents have the time, the money and the physical health, and they want to spend special time with their grandchildren to mark a birthday or a milestone such as a bar or bat mitzvah," says Jim Kackley, general manager of Thomson Family Adventures (www.familyadventures.com), in Watertown, Mass., which specializes in family vacations to such destinations as Costa Rica, Thailand and China. Kackley says the number of clients who are 65 and older has doubled since 2010.

Most “grand travel" trips are offered during the summer, with a few during winter and spring breaks. If you go with a travel agency tour, you can find a specialized group, such as Custom Safaris, which arranges customized multigenerational trips to Africa. Or you can use an outfit such as Road Scholar, which offers a broad range of prepackaged tours.

Linda Friedman, 66, chief executive officer of Custom Safaris (www.customsafaris.com), in Bethesda, Md., arranges about 25 bespoke multigenerational trips a year. Typically each family has its own guide. One popular two-week itinerary includes flying to Nairobi and viewing the elephants and other game in Amboseli National Park, facing Mount Kilimanjaro.

Every summer since 2006, Friedman and her husband have taken their two grandsons, now 12 and 14, on safaris. The boys share a tent. "I'm giving them memories for a lifetime," she says.

This summer, they visited the Samburu reserve. On the banks of the Uaso Nyiro River, where herds of elephants, buffalo and zebra roam, they saw a pack of wild dogs and viewed leopards three nights. They watched baby elephants running into their stalls at the elephant orphanage, a rescue charity in Nairobi. They also visited the prison where Nelson Mandela was incarcerated on Robben Island in Cape Town, South Africa. "Every day is an adventure. You don't know what you are going to see. Tomorrow is always better than today," Friedman says.

Tailored for Both Generations

Road Scholar (www.roadscholar.org), a division of Elderhostel, arranges grand travel for about 7,000 people a year to international and domestic destinations. (The Nelsons took their granddaughters on Road Scholar tours.) Grand travel business has increased by about 15% in the past ten years, says JoAnn Bell, vice-president of programming.

The average age of Road Scholar grandparents is 70. One popular itinerary is seven days in Paris, starting at $2,499 per person, which includes a scavenger hunt at the Louvre and a chef teaching how to bake croissants and brioche. Also on the top of the list is nine days in Costa Rica, with rafting, hiking, zip-lining and rainforest activities, for $2,394 per person. (Prices do not include airfare.)

Another large operator of intergenerational trips is Tauck's Bridges family-travel program (www.tauck.com), which the tour company started in 2003. Sharon Bell (no relation to Road Scholar's JoAnn Bell), brand manager for Bridges, says the program offers 18 family trips a year to classic destinations such as Italy, London, Paris and U.S. national parks. These trips are open to families of all kinds, but Bell says about one-third of travelers are grandchildren and grandparents only.

Tauck's tour operators tailor activities to both generations, says Bell. "A good tour provider thinks about what an 8-year-old can do versus a 78-year-old," she says. For example, she says, a family could decide on a rock-climbing trip where the older generation sits and watches from the bottom, or they could choose a hike on flat terrain with rest stops.

For its grand travel, Road Scholar describes the activity level for each trip. On its Grand Canyon river-rafting trip, for example, it notes that participants will need to walk "up to one mile on uneven and sloped terrain, sometimes in hot conditions."

Road Scholar also categorizes each trip by suitable age level, such as 14 to 17, or 9 to 11, to increase compatibility among tour participants. "It is so nice for the kids to meet their own age-appropriate peers from across the country," says Pat Zelkowitz, 77, a retired doctor from Fort Myers, Fla., who has taken her granddaughters, ages 12 and 17, on several trips including to Paris, New York City, and Oxford, England.

Before you plan a grand travel adventure, you should consult the parents first. They may have safety concerns. Nelson says her daughter-in-law vetoed one trip that involved a helicopter outing. Zelkowitz says her daughter prefers group trips such as Road Scholar in case a medical problem arises for Grandma. To ease a parent's anxiety, you could suggest that the child call home every night to check in.

Grandparents also should involve the grandchildren in the planning. That will build anticipation and help them learn about various destinations. "I give three choices and let them pick," Zelkowitz says. Consider whether you want to fly, the distance you want to travel and whether you want to stick to an English-speaking country. Share reading materials, maps, photos and movies about the destination.

Although your grandkids may object, agree ahead of time to restrictions on the use of electronic devices. Tablets and smart phones are great for taking photos and for staying occupied on long plane rides. Otherwise, grandparents might prefer if they are used only for private downtime in the hotel room. Be sure to take a notarized letter signed by both parents that states you have permission to travel with the child and to make medical decisions for the child.

The trip doesn't have to end when you get home. "You have a shared experience that you can refer to for the rest of your life," Road Scholar's Bell says. To preserve memories, Nelson makes a photo album of the trip for each grandchild. Grand travel has proved so successful that Road Scholar is expanding its market in 2015 to include trips designed for college-age grandchildren.

Apple Watch and other technology provides fast feedback, comfort for older users, and a powerful assist for caregivers.
The Annuity With a Tax-Planning Twist

Annually adjusted contribution limits and other requirements must be met if you're covering health care costs with a Health Savings Account.
Now’s the Time for Estate Tax Planning