Technology Stocks: Should You Bail?

As tech meltdowns go, the recent one is tame. Still, we think a couple of tech titans may be worth buying now. 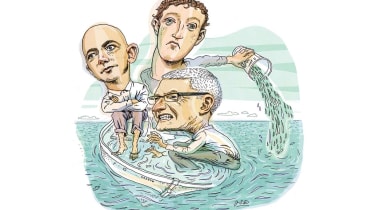 If you’re starting to suspect that intermittent meltdowns are an in­escapable feature of investing in technology stocks, you’re correct. The tech rout that began in August 2018 is just the most recent example. Tech investors want to know what caused the latest tech short-circuit and whether there are any bargains among the ruins. But you should also be asking whether you’ve got the fortitude to invest in such a volatile sector.

New technology has always revolutionized American life, and tech stocks have always been a part of that revolution. Railroad stocks dominated the 19th-century stock market; RCA, known to traders as Radio, was a lion of the Roaring Twenties. Polaroid dominated the Go-Go Years of the 1960s, and Microsoft and Apple soared in the 1990s, along with a spate of dubious internet stocks, such as Pets.com.

Facebook, Apple, Amazon.com, Netflix and Google’s parent, Alphabet—the FAANG stocks—have been the darlings of the most recent bull market. All five represent revolutionary advances: Facebook in social media, Apple in hardware, Amazon in retailing, Net­flix in entertainment and Google in internet search and online ads. From the start of 2018 until they peaked later in the year, the FAANG stocks gained an average of 55% (not including dividends). Netflix, up 118.3%, led the pack.

What happened? Blame, at least in part, the usual suspect: high share prices relative to corporate earnings. “Valuations got a little crazy, and when people get nervous, they sell what can give them some nice profits,” says Robert Doll, senior portfolio manager and chief equity strategist at Nuveen Asset Management.

When stocks gather that much momentum, everything has to go perfectly for those stocks to continue rising. Instead, the investment thesis for many tech stocks started to crack. In the case of Apple, rumors began to fly in November that the company had slashed iPhone production orders. Facebook’s woes began earlier in the year, as the company faced scrutiny of its user privacy practices.

Investors have also started to worry that tech titans will face increased government regulation, either here or abroad. Recall that Microsoft faced years of antitrust battles with the European Union. Although not a worry currently, Amazon, Facebook and Google, which is facing antitrust action in Europe, could eventually face antitrust scrutiny in the U.S. Recent EU regulations give consumers more control over data collected by tech companies; California passed a tough new privacy law in June. “Tech is sitting in the crosshairs of the regulators,” says Savita Subramanian, head of U.S. equity & quantitative strategy at Bank of America Merrill Lynch.

These intermittent meltdowns show that not every tech company stands the test of time.

Semiconductor stocks hit a serious slump of their own, led by chipmakers Nvidia and Applied Materials, which each issued lackluster earnings outlooks. As is typical in the boom-and-bust microchip industry, bulging inventories and slower demand have clobbered chipmakers, and trade tensions with China have increased fears of slowing demand.

Finally, tech stocks were hit by what sank the rest of the stock market: fears of a slowing economy and concerns that the Federal Reserve might raise interest rates too far, too fast. Because tech stocks went up the most, they came down the hardest as well.

Value in the ruins. As tech meltdowns go, the recent one is relatively mild. Still, nearly half of the technology stocks in the Nasdaq 100 index are 20% or more below their 52-week highs. Although that’s a big loss, bear in mind that the 2000 tech wreck was so severe that it took the Nasdaq 100 benchmark years to beat its 2000 high, and many of the dot-com stocks—including Pets.com—simply disappeared.

These intermittent meltdowns show that not every tech company stands the test of time. Polaroid, Digital Equipment and dozens of other firms litter the technology graveyard. “Today’s companies are not finished,” Doll says. “They have good earnings growth, cash flow, products and balance sheets.”

Apple, for example, has $237.1 billion in cash on its balance sheet. Amazon announced record net income of $2.9 billion in the third quarter. Facebook produced earnings of $1.78 per share, well above analysts’ estimates of $1.46 per share.

Before you dive into tech, bear in mind that you might own plenty already, especially if you’re an index investor. Tech stocks account for 20% of the S&P 500. Now is also a great time to reevaluate your risk tolerance. If downturns will have you waking up at night shouting, “I’m ruined!” then perhaps you’d be better off in more defensive corners of the stock market.

Otherwise, consider the debacle a buying opportunity. Among the five FAANG stocks, Alphabet (symbol GOOGL, $1,047) is worth exploring. The company has an extremely strong position in the online ad market—one that would be difficult for another company to steal. Alphabet also has an extremely healthy free cash flow—that is, cash available for the company to use in whatever way it sees fit.

Other tech blue chips are on sale, too, including Microsoft (MSFT, $105). Its Windows operating system, for example, still sits on about 64% of all desktop computers, and it’s increasingly a leader in cloud storage. The stock has a 1.8% dividend yield and enough cash on its books—nearly $136 billion—to sustain its payout for a very long time.

Given the tech industry’s continually changing nature, there’s no harm in letting a pro decide which stocks to buy. Income-oriented investors might consider the First Trust NASDAQ Technology Dividend ETF (TDIV), which buys only tech companies that pay dividends. The fund is up 2.2% over the past 12 months and has an annualized dividend yield of 2.8%.

For a diversified, actively managed fund, consider T. Rowe Price Global Tech­nology Fund (PRGTX), which charges a below-average 0.89% in expenses. The fund has averaged a 17.9% return over the past five years, beating the average tech fund by a little more than four percentage points a year. It’s been a white-knuckle ride. The fund tumbled 9.0% over the past three months, but that’s still better than the average tech fund’s 12.9% loss.

Lessons from tech wrecks of the past can help you gain perspective. “The best thing you could have done in 2002 was ask yourself, ‘What is the great stock I wanted to buy but didn’t?’” says Kevin Landis, chief investment officer of Firsthand Capital Management. You could try the same exercise today.

Bonds can be more complex than stocks, but it's not hard to become a knowledgeable fixed-income investor.
14 Hot Upcoming IPOs to Watch For in 2020 and 2021