Despite the big gains, prospects remain bright for most of the companies on the winners' list. 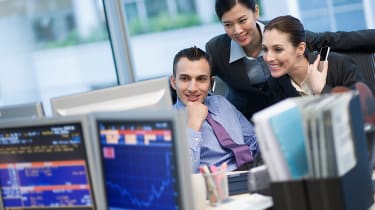 A diverse group of companies in industries ranging from travel and gaming to health care and beverages made up the 10 biggest winners in Standard & Poor's 500-stock index during 2014. And many of these companies appear likely to fly even higher in the coming year.

Airlines, which are big beneficiaries of plunging oil prices, landed two stocks on the list of top performers, including the biggest gainer, Southwest Airlines (symbol LUV, $42.32). Shares of Southwest soared 125% in 2014, and Joseph DeNardi, an analyst at Stifel, Nicolaus & Co., predicts that the stock will hit $55 within a year. (All share prices and returns are as of December 31; returns, provided by Standard & Poor's, do not include dividends.)

What makes Southwest attractive is partly related to what it doesn't do—yet. Southwest is the only major U.S. carrier that lets passengers switch flights and check most bags at no charge. As a result, Southwest collects just $1.30 per passenger in luggage and switch fees, far below the $7 to $15 in per-passenger fees that its competitors collect. The recent decision by JetBlue Airways (JBLU, $15.86) to start charging for every packed bag could put pressure on Southwest to change its approach, DeNardi says. And though imposing additional nuisance fees might annoy Southwest passengers, DeNardi thinks such a move would propel the shares even higher.

Thanks to lower fuel costs, analysts at Raymond James recently boosted earnings estimates for a fleet of airline stocks, including Delta Air Lines (DAL, $49.19), which was the S&P's seventh-biggest winner in 2014, with a gain of 79%. Fuel expenses can account for as much as 36% of airline costs, and most analysts have been basing their projections on oil at $100 a barrel, says Raymond James analyst Savanthi Syth. If fuel prices remain near the recent sub-$60 level, many airlines, including Delta, will prove far more profitable than anticipated.

The release of two new game consoles—the Xbox One and the PlayStation 4—at the end of 2013 helped make 2014 a very good year for Electronic Arts (EA, $47.02). Shares of EA, the nation's top publisher of video games for those systems, skyrocketed 105%, making the stock the year's second-best performer. For the 12-month period that ended September 30, revenue rose 9.5% from the year-earlier period, and profits surged 75%.

EA makes a number of popular sports and war-related video games, including Madden NFL and Battlefield 4, and the company brags that the games' players have logged more than 1.9 billion hours of game play on consoles and personal computers. However, a key factor in the company's improved profitability was its decision in 2014 to focus on just the relative handful of games that account for the bulk of its sales. EA predicts that it will earn $2.10 per share in the fiscal year that ends this March, an increase of 24% from the previous year.

Health care stocks came in third, fourth and sixth in 2014. For Edwards Lifesciences (EW, $127.38), which climbed 94%, the story revolves around heart valves. The company's valves can be implanted without removing the malfunctioning valves they replace, which makes heart-valve surgery less invasive. This process has become the industry standard for at-risk patients. However, Canaccord Genuity analyst Jason Mills believes the less-invasive procedure is likely to become increasingly popular even among healthier heart patients and will drive the company's growth. In December, Mills hiked his one-year price target to $159.

Shares of Allergan (AGN, $212.59) rocketed 91% in 2014, thanks largely to activist hedge fund manager Bill Ackman, who, over Allergan's objections, sought to marry the maker of Botox with the ever-acquisitive Valeant Pharmaceuticals (VRX, $143.11). Unwilling to merge with Valeant, Allergan in November found its own suitor: Actavis (ACT, $257.41). The deal calls for Actavis to acquire Allergan for cash and stock worth about $219 per share. UBS analyst Marc Goodman downgraded Allergan to "hold" because he doesn't expect any other suitors to emerge. Thus, Allergan shares are likely to trade based on the price of Actavis stock until the deal is complete.

However, the prognosis for Mallinckrodt (MNK, $99.03) remains bright even after an 89% advance in 2014, says Goodman. The maker of pain killers and generic drugs suffered a setback in November when the Food and Drug Administration began to publicly question the effectiveness of its generic version of Concerta, a drug for treating attention deficit disorder in children. However, another Mallinckrodt drug, called Acthar, is now used to treat everything from lupus to multiple sclerosis to spasms in infants. The drug's third-quarter sales increased by 19% compared with the same period a year earlier, and Mallinckrodt has added staff to the Acthar sales team, which bodes well for future growth, Goodman says. He thinks Acthar's rapid growth coupled with other drugs in Mallinckrodt's medicine chest will help the stock climb to $107 within a year. (Mallinckrodt, which is registered in Ireland but has its U.S. headquarters in Missouri, was added to the S&P 500 last August after completing its merger with Questcor Pharmaceuticals.)

Never heard of Avago Technologies (AVGO, $100.59), a stock that catapulted 90% and came in fifth in the 2014 performance derby? Wonder why a company based in Singapore is in the S&P 500, the premier index for tracking the performance of the U.S. stock market? Avago joined the S&P 500 index last May when the semiconductor company completed the purchase of LSI Corp., a San Jose, Calif., chip maker, for $6.6 billion. UBS analyst Stephen Chin says Avago is one of the primary beneficiaries of the proliferation of wireless devices. The company, which boasts thousands of patents, provides components for a wide array of wireless devices, from phones and network servers to optical mice and printers. It also makes components for servers, data storage and factory automation. Thanks partly to the LSI acquisition, the company has been growing rapidly and is likely to continue to expand at a blistering pace. Chin says his most pessimistic scenario anticipates sales gains of 37% in the fiscal year that ends in November 2015. The stock trades at just 13 times estimated fiscal 2015 earnings. Chin's one-year price target is $115.

Keurig Green Mountain (GMCR, $132.40), which gained 75%, was eighth on the winner's list. The company bases its success on finding innovative ways to deliver a jolt of caffeine to groggy consumers. Keurig's earnings have climbed a spectacular 60% annualized over the past five years, largely thanks to the increasing popularity of single-cup servings of coffee and tea. But the stock has fallen 4% since the company announced just before Christmas that it was recalling 7 million brewers because of leaking issues. Meanwhile, Keurig is in the process of buying Bevyz, which has a complementary technology for dispensing a wide array of cold drinks one serving at a time. William Blair analyst Jon Andersen thinks the purchase will fuel further earnings gains and help the stock continue to outperform the market. Working against Keurig, though, is the stock's lofty valuation—31 times estimated year-ahead earnings.

It was smooth sailing the past year for Royal Caribbean Cruises (RCL, $82.43), the S&P's ninth-biggest gainer, with a rise of 74%. Stifel analyst Steven Wieczynski says the stock entered 2014 "grossly undervalued." The improving economy has helped Royal Caribbean's bookings, and the company has been paying down and refinancing debt, allowing the cruise line to shave its interest costs. Lower fuel costs are helping, too. Royal Caribbean is on track to double its earnings per share between 2014 and 2017, Wieczynski says, and that should lead to a continuation of strong share-price appreciation. Wieczynski sees the stock at $96 in a year.

Bringing up the rear of the top 10 was Kroger (KR, $64.21), one of the world's largest grocery-store chains, with a gain of 62%. Investors reacted warmly to Kroger's $2.6 billion acquisition last January of the Harris Teeter chain, which boosts the company's presence in the Southeast and mid-Atlantic region. With the help of Harris Teeter, Kroger's revenues in the fiscal year that ends this January are expected to be up 10% from year-ago levels. Analysts project that profits will be up 19% in the January 2015 year and 9% the following year. But the stock, trading at 17 times estimated fiscal 2016 earnings, may be due for a rest. Morningstar values Kroger at $45 per share, and even analysts at Morgan Stanley, who praise Kroger as a "strong company with underappreciated competitive assets," have a one-year price target on the stock of only $65, less than a buck above the current level.

Bonds can be more complex than stocks, but it's not hard to become a knowledgeable fixed-income investor.
Stock Market Today 11/27/20: Nasdaq Notches Another High as COVID's Spread Worsens